May 21st and 22nd will mark the 158th Anniversary of the Battle of Resaca and our 38th annual Civil War Reenactment of the famous battle. 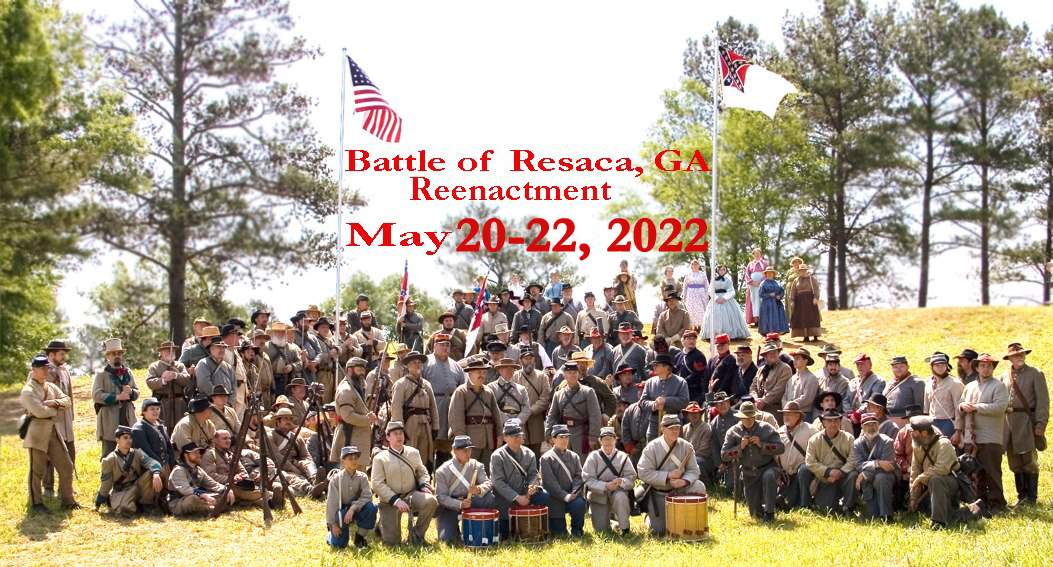 May 21st and 22nd will mark the 158th Anniversary of the Battle of Resaca and our 38th annual Civil War Reenactment of the famous battle. The reenactment is Georgia’s oldest and largest premier event held in the state.

The Battle of Resaca Reenactment is hosted each year by the many volunteers of the Georgia Division Reenactors Association, one of the nation’s oldest and most respected Civil War reenacting organizations. A portion of the proceeds will go towards the Resaca Battlefield area preservation efforts, while the balance will go towards funding next year’s event. Please see our Sponsors page for a list of the organizations and businesses that have helped make this event possible.

Confederate BatteryThe reenactment will again be held on the historic Chitwood Farm, a 650 acre section of the original battlefield, which in itself is a rare privilege. This farm hosted some of the heaviest fighting during the conflict. Two Federal soldiers were awarded the Medal of Honor for the capture of the Van den Corput’s four gun Confederate battery, whose earthworks are still preserved and intact after 150 years. Also evident within the property are the original Federal and Confederate entrenchments and the 1864 Western & Atlantic Railroad line located close to the present day camps and fields of battle.

As most participants are aware, many major improvements have been made during the past several events and our staff and volunteers are working to provide another quality event for Resaca. Again this year, scenarios are being planned from the research of William R. Scaife, a noted historian and author of Campaign for Atlanta. Both Saturday and Sunday’s battles will be held on the same field but with a different scenario – and maybe a surprise or two. Since 1999, the Battle of Resaca Reenactment has become famous for its aggressive battles and surprise tacticals. Extensive recreations of breastworks and Van den Corput’s redoubt also await your visit.

Confederate CavalryBoth the Federal and Confederate camps are located in much more reenactor-friendly sites within easy reach of the sutlers, vendors, & reenactor parking. Both encampments will be located close to the respective 1864 lines of battle. Firewood, bedding straw, and horse hay will be provided. For campaign-style reenactors, camping will be permitted in or near the breastworks, but all amenities will have to be secured from the main static camp areas.

Various civilian activities will be conducted during the event. On Saturday morning, all reenactors are encouraged to attend the Memorial Service at the Resaca Confederate Cemetery located at the south end of the farm. The cemetery is the final resting place of 450 soldiers and is one of the first two such Confederate Cemeteries established in our nation. Later Saturday evening, a period social and dance will be held for all reenactors, with period music.

On Sunday morning, a non-denominational church service will be conducted on-site at the Social Fly for all reenactors.

Confederate AttackThere will be more convenient and plentiful parking for both reenactors and spectators. Also, period sutlers, authentic civilian and refugee camps, and modern concessions will be available.

As many have witnessed during the past several years, this is not just another reenactment. The Battle of Resaca Reenactment is put on for reenactors by reenactors, and for the enjoyment of the public in order for everyone to have an experience to remember. Come and relive this part of our history. Camp, fellowship, and fight on the very same historic ground as those brave soldiers did nearly 150 years ago.

The Battle of Resaca Reenactment will be held rain or shine. The battles may be delayed until severe weather moves out of the area, but they will not be canceled.

The GDRA staff would like to thank all of the many volunteers who have donated their time and effort in making this event possible, the families who allow us the use of their historic property, all of the many community sponsors, the sutlers and vendors who come and participate each year, the Civil Air Patrol for helping us out tremendously, the local emergency fire and medical services, all of the many spectators who come to watch the event, and most importantly, all of the reenactors who travel from all over the country and donate their time and expertise to make this event possible

he Battle
Confederate TrenchesDuring May 14-15, 1864, the first major battle of the Atlanta Campaign was fought around the tiny village of Resaca, Georgia. Gen. Joseph E. Johnston’s Confederate army of 55,000 soldiers had fallen back from Dalton and had occupied the strong defensive fortifications around the town. In hot pursuit and now directly facing them across the breastworks was the 110,000 strong Federal army under the command of Gen. William Tecumseh Sherman. For two days, unrelenting attacks and counter-attacks took place all along the length of the lines, with neither side gaining an advantage.

Gen. Sherman, finally sensing the futility of the frontal attack, quietly sent part of his army south around the flank of the Confederate line in an attempt to cut the Confederates off from their railroad supply line. Gen. Johnston, seeing the Federal army outflanking him, was forced to abandon his stronghold and the Confederate army slipped away unseen during the night across the Oostanaula River. When the Federal forces advanced the following morning, they found the earthworks empty. The Battle of Resaca had ended. During the fierce fighting that took place here, more soldiers were engaged in battle than at either the Battle of Chickamauga or the Battle of Kennesaw Mountain. When the thunder ceased and the smoke finally cleared, more than 11,000 known casualties from both armies lay on the fields of Georgia.

May’s Column from The Art Barn
New song “Unlove You” released by Isabella Hartline over the weekend
Posting....