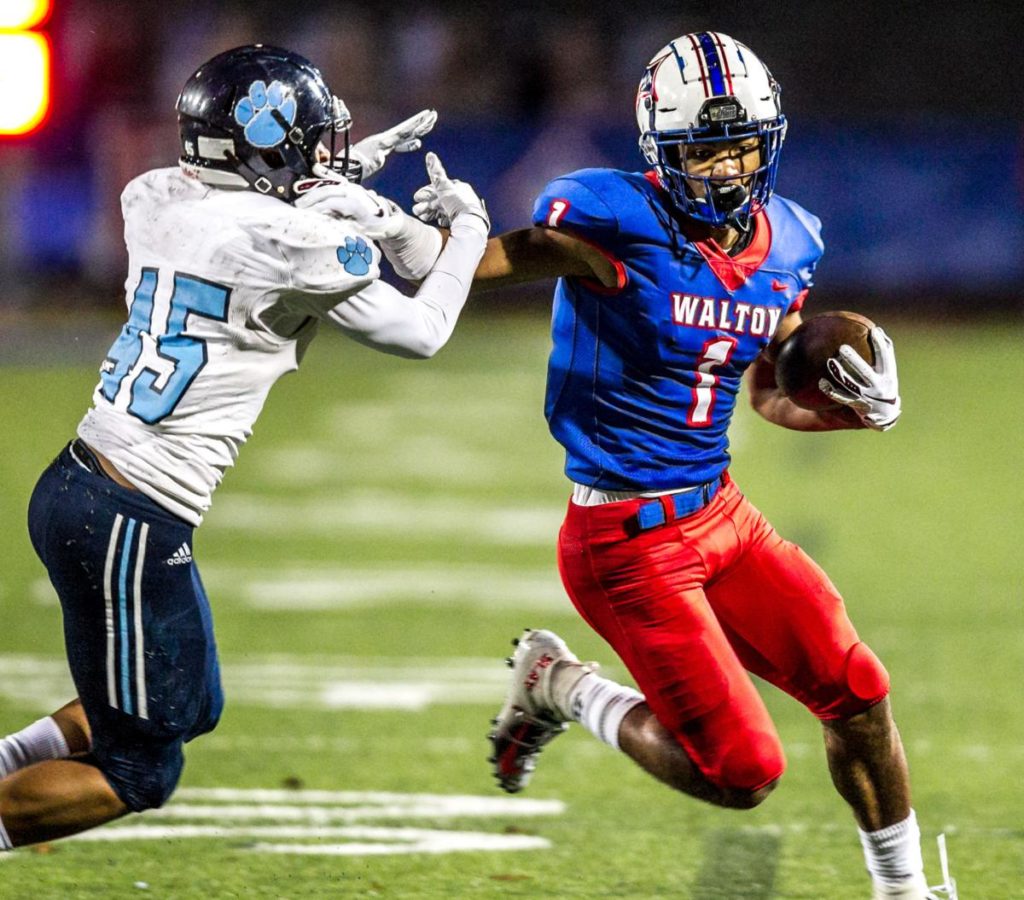 Camden County made the playoffs for the first time in three seasons, but the Wildcats didn’t last long in the postseason party.

Camden was eliminated from the Class 7A state playoffs Friday night with a 40-20 loss at Walton in an opening-round game played in Cobb County.

Still, it was a successful season for the Wildcats (7-4) under second-year head coach Bob Sphire who has revived the Camden program after back-to-back losing seasons.

Camden and Walton went back and forth in the first quarter which ended with the Raiders (10-1) leading 21-14 after the first 12 minutes.

The Wildcats’ first touchdown came on a 60-yard run by Jamie Felix on the team’s opening possession to match Walton’s first-series score.

Down 21-7, the Wildcats pulled within 21-14 late in the opening frame on a 9-yard run by Javaris Edwards.

Thing is, Camden could not stop Walton which would run away from the Wildcats over the final three periods.

The Raiders rang up 443 total yards which included a 12-carry, 184-yard performance by running back D.J. Soyoye.

Walton receiver K.D. Alford had three catches – all touchdowns – for 155 yards. Dominick Blaylock only had one reception for 28 yards and six rushes for 13 yards, but he did score two rushing touchdowns in the big win.

The Raiders will play Hillgrove in the second round next week.

In other playoff games involving Southeast Georgia teams on Friday, the results were as follows:

The Wildcats won on the road to open the 2018 playoffs Friday night as they prevailed at Greenbrier in their first-round game.

Richmond Hill (5-5) is the third seed from Region 2 while Greenbrier (3-8) entered the game as the second-place team from Region 3.

The Wildcats led 19-0 before the home team scored 14 points in the fourth quarter.

Timmy Forston had nine tackles for the Richmond Hill defense while Nathan Vickers had six stops and a sack. Vickers also returned a blocked punt for a touchdown.

Richmond Hill will play Coffee next week in round two.

The Tigers (5-6) knocked off Grovetown on the road Friday night to score a first-round victory as the No. 4 seed from Region 2.

Grovetown (6-5) went 5-0 in Region 3 to win the league title and get the top seed and a home game for the state playoffs.

Bradwell jumped ahead 14-0 in the first quarter on scoring runs of 35 and 40 yards by senior running back and South Carolina commit Kevin Harris.

The Tigers would lead 21-7 at halftime in a game played on a muddy field after afternoon rains.

The Warriors scored on their first drive of the third quarter, but Bradwell responded with a 60-yard scoring pass from Vencent Gilbert to David Spaulding for a 28-14 cushion.

Grovetown did score another touchdown with 1:39 to play to make for the final score.

Bradwell will play at Northside in the second round next week.

The Yellow Jackets managed to win despite a less-than-stellar offensive performance Friday night at Jaycee Stadium in Jesup.

The unbeaten Region 2 champions went up 7-0 in the first period on a 56-yard run by standout senior running back MJ Fuller.

The Jackets wouldn’t regain the lead until the five-minute mark of the fourth quarter when Presley Cain made a 27-yard field goal for a 10-9 advantage for the home squad.

Wayne sealed the win when it blocked a punt at the Jonesboro 20-yard line which led to a 17-yard run by senior athlete Ashby Cribb who moved from receiver to quarterback in the fourth quarter to help the Jackets pull out the hard-fought win.

The Jackets will be at home next week in the second round against Bainbridge.

The Gators didn’t have any trouble in their opening-round game Friday night in Waycross.

They took a 21-0 lead into intermission, and after Riverdale scored its only touchdown in the third quarter, the Gators added two more fourth-quarter scores to finish out their victory.

Ware improves to 8-3 on the season. Riverdale ends its campaign with a 7-4 record.

The Gators are the No. 2 seed from Region 2.

Ware will visit Warner Robins next week in round two.

The Bears posted a convincing victory Friday in their first-round game in Blackshear.

Jennifer Johson – The Pierce County Bears take the field for Friday’s playoff opener against Windsor Forest in Blackshear. The Bears blitzed the Knights to advance to the second round next week.

The Region 2 champions literally took charge from the start as Dee Bethea returned the opening kickoff 97 yards for a touchdown.

The rout was on.

Pierce pulled its starters at halftime.

The Bears finished with 412 total yards while holding the Knights (6-5), the No. 4 seed from Region 3, to 232 yards on the night with 140 of that total coming after halftime against the reserves.

The fourth quarter was played with a running clock under the state’s 30-point mercy rule.

Pierce quarterback Jermaine Brewton was 11-of-15 for 214 yards and two TDS in the first half.

Bethea had 219 all-purpose yards before halftime including 113 receiving yards on just four receptions with one of those going for a 70-yard score.

Standout running back John Jones had 73 yards on eight carries before the break and finished rushing for 90 yards and two TDs on 11 totes.

Parker Peagler also caught a TD pass for the Bears in the second period. He snared five balls for 83 yards in the opening half.

Pierce led 21-7 early when it scored on the kick return by Bethea to start the show and then also scored on its first two offensive snaps.

The Bears will be at home next week in the second round against Jackson.

The Pirates were eliminated from the postseason with their first-round loss to the Savannah team on their home field.

Jenkins improved to 8-3 overall, and the Warriors are a pretty fair No 3 seed from Region 3 where their league losses came to Benedictine (21-6) and Southeast Bulloch (9-8). Those teams finished first and second, respectively, in the region.

Jenkins advanced to the quarterfinals last season. The Warriors will take on Pike County next week at home since Pike is a No. 4 seed that upset No. 1 seed Crisp County in its first-round contest.

The Pirates finish their first season under veteran coach Rick Tomberlin with a 6-5 record after earning the No. 2 seed from Region 2 behind Pierce County for the postseason.

Bottom line is the Panthers know how to win in the playoffs, but Southeast Bulloch doesn’t.

The Yellow Jackets entered the game having not won a playoff game in 45 seasons, and their wait for a postseason win will last for at least another year.

Liberty (7-3) led 18-14 at halftime on three scoring runs by their workhorse running back Kris Coleman.

The Panthers took complete control in the third quarter with rushing touchdowns by Coleman and Dionte Bowens to take a 31-14 cushion into the final quarter.

Bowens scored again for Liberty in the fourth stanza to punctuate with the win.

Southeast Bulloch ends the season with a 9-2 record after finishing second in Region 3 while losing only to champion Benedictine.

Liberty will go to Fort Valley next week for a second-round meeting with Peach County, last season’s state runner-up.

The Panthers can reach the quarterfinals a third straight season with a win next week.

The Indians easily advanced to the second round with their shutout-win in Folkston over Taylor County on Friday night.

Charlton led 24-0 at halftime and pushed its lead to the 38-0 count with two more scores in the third period.

The win lifts the Indians to 8-3 on the year.

They are the No. 11 seed in the public-school bracket and will now face off with Region 2 rival Clinch County in round two next week. Clinch had a bye in the opening round.

Predictions for the Georgia high school football playoffs
Terrors take down Evans in first round; up next is Valdosta in round two
Posting....