Terrors take down Evans in first round; up next is Valdosta in round two

Glynn Academy wins 42-7 at home to advance in Class 6A state football playoffs. 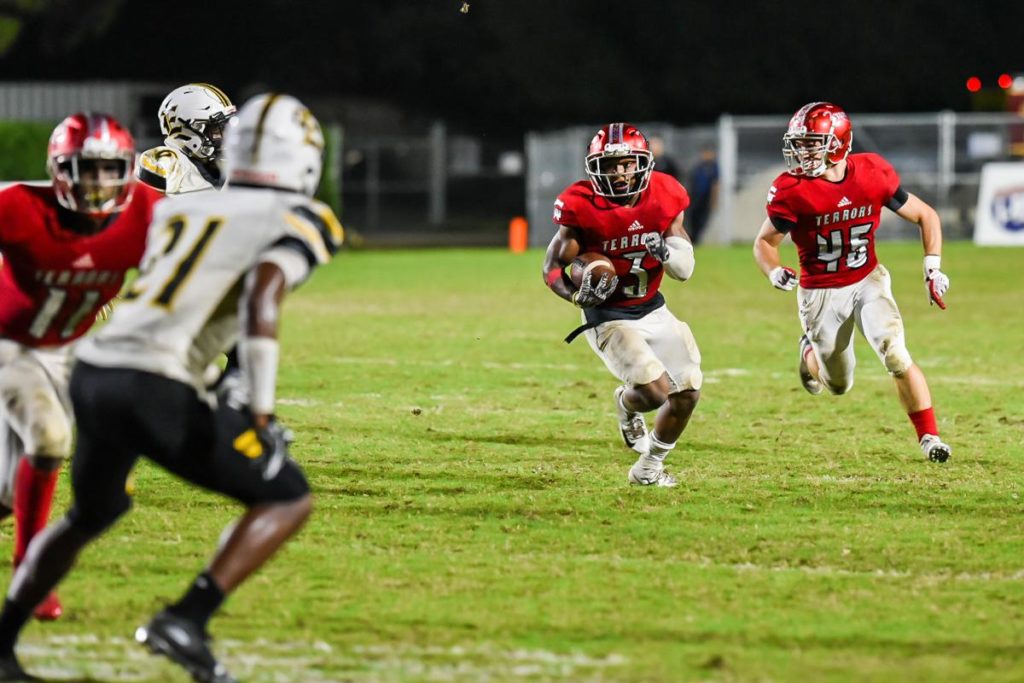 But once the Terrors got lathered up, Evans didn’t stand a chance as Glynn ended up rolling to a 42-7 victory in the opening round of the Class 6A state playoffs.

The Knights (3-8), who came to Brunswick as the No. 4 seed from Region 3, actually led the Region 2 champion Terrors 7-0 at the end of the first quarter.

However, Glynn (8-3) faked a punt to start the second quarter and gained a first down to ignite its first scoring drive of the night.

The Terrors would build a 21-7 lead at halftime and Glynn simply overpowered the Knights over the final two quarters to win going away.

“We can’t be satisfied with this,” said GA coach Rocky Hidalgo. “It only gets tougher from here. If we continue to make strides and improve every day, we’ll have a chance to be in the mix.”

Friday’s win was the fifth in a row for Glynn which won its fourth consecutive region crown with four straight victories to close out the regular-season schedule.

The victory was also the fifth straight for Glynn in the first round of the playoffs under Hidalgo who took the Terrors to at least the quarterfinals in each of his four previous seasons with the program.

Next up for the Terrors in this year’s playoffs is a second-round game at home next Friday against Valdosta which thumped Lovejoy 70-29 Friday after trailing early in that game on its home field.

Glynn defeated the Wildcats at home last year by a 27-3 score in a first-round matchup. For what it’s worth, the Wildcats (7-4) rolled over Glynn in a preseason scrimmage back in August over in Valdosta.

“We had a work-man like attitude this week in practice and wanted to come out here and execute tonight,” said Hidalgo, noting Glynn went  with scripted plays early to see how Evans would defend certain formations and stayed with the script though it started slowly on offense. “I felt like we executed from midway through the first quarter on.

“We’ll take it, but I know we’re going to have to improve. We’re not going to beat Valdosta playing like that,” the GA head man said.

Evans scored its only touchdown of the game late in the first quarter on a 95-yard pass play that worked due to a busted coverage by Glynn. Lletyon Lackey hit a wide-open Derrick Canteen in the middle of the field and the Georgia Southern committ raced past the defense for the long score.

Glynn got on the scoreboard after its fake punt on fourth-and-2 from its own 46-yard line to start the second quarter. Alan Partin took a short snap and dashed around left end for a 36-yard pickup to the Evans 18.

“We needed to get some juice going,” Hidalgo said about the fake punt.

Moments later, Nolan Grant went 6 yards for a touchdown to cap the nine-play, 80-yard drive by Glynn. Chase Gabriel added the first of his six extra-point kicks to make it 7-7. Grant would lead Glynn’s rushing attack with 137 yards on 24 carries.

Just over three minutes later, Quantavious Bostic gave Glynn its first lead when he sprinted 51 yards on a pitch-play.Bostic ended up gaining 92 yards on eight runs for the game.

The Terrors tacked on another touchdown before the end of the first half when TJ Lewis scored on a quarterback sneak on third-and-goal from the 1 to give GA its 21-7 cushion at the halftime break.

Sam Wagner, who started his fifth straight game at quarterback, hit Bostic and Lewis on a pair of 25-yard pass connections on the 78-yard drive by the Terrors.

After halftime, Glynn scored the first time it had the ball when Lewis again scored on a sneak to seal a 7-play, 70-yard scoring series.

Mike Brinson – Members of the Glynn Academy defense smother an Evans player during Glynn’s 42-7 victory in the opening round of the playoffs on Friday night.

The GA defense made a stand in the third period when the Knights drove to Glynn goal line. Evans actually appeared to score on a pass on third-and-goal from the 3, but a penalty for an illegal shift erased the touchdown.

The Terrors shut down the Knights’ next two plays to force a turnover on downs.

Glynn took its 28-7 lead into the final 12 minutes when it scored twice more to blink the large stadium scoreboard to the final tally.

Caden Hutchinson scored both GA touchdowns in the fourth on two 4-yard runs on 50- and 56-yard scoring marches by the Terrors who were reeling off first down after first down while ripping apart what was left of the Evans defense. Hutchinson ran for 46 yards on just seven carries.

Meantime, in Valdosta, the Wildcats were also imposing their will on Lovejoy while lighting up the scoreboard in the second half of their game.

Thus, the expected matchup between Glynn and Valdosta is now set for next Friday in Brunswick with the winner going on to the Elite 8 and the loser packing up its equipment until spring practice for next season.