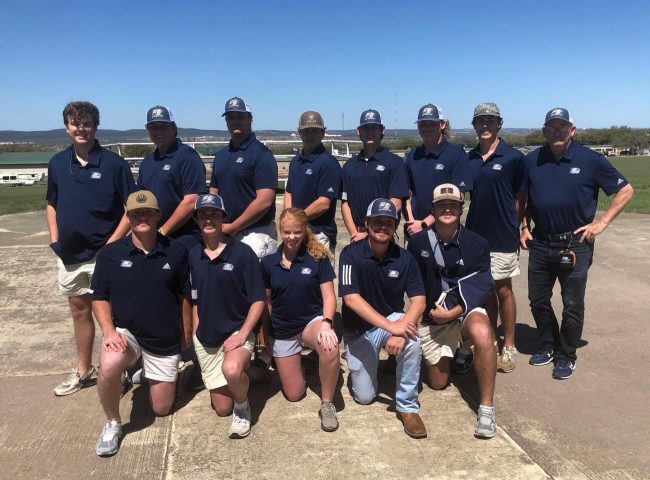 Nearly 50 college teams and more than 550 student athletes made the trip to the National Shooting Complex in San Antonio, Texas to compete across all divisions.

The Georgia Southern team, which is made up of 12 students, won the Division 4 championship after shooting the highest score overall out of 14 teams competing. Additionally, the team outperformed teams from around the nation to win the Super Sporting and Sporting Clays categories. The team also placed second in the American Trap category and third in the American Skeet category in Division 4.

The Eagles were led by freshman Andrew Weiche who shot his way to a Top 10 overall finish out of the four divisions at the event. Gracie Whitley, the only female shooter on the team, shot 96/100 in American Trap, helping to secure the team’s second place finish in that category. The team finished the competition with titles and irreplaceable memories.

“Being in San Antonio was an eye-opening experience,” said Bailey Harrell, treasurer of the clay target team. “It was the first time I have really traveled to shoot competitively, and it is a memory I’ll cherish forever. It was great to be able to represent Georgia Southern as a team and coming back home with a national championship makes it that much more special.”

While Georgia Southern had a clay target shooting club, there wasn’t a team that competed nationally. This led a group of University supporters to garner the support of alumnus Marty Fischer, a professional shooter with 39 years of coaching experience, to form the team in the summer of 2020. Fischer was impressed with the team’s first year of competition.

“I couldn’t be more proud of this team,” said Fischer. “They have worked tirelessly to prepare for this National Championship. Every one of them knows how to compete as they have won state, regional and national titles while in high school. But college is different. They are now young adults and the expectation needle rises significantly at the collegiate level.”

Despite missing a team member during the competition and existing for just more than a year, the Georgia Southern Clay Target Team has placed itself among the elite college shooting teams in America, Fischer added.

The ACUI (Association of College Unions International) is the national collegiate sanctioning body for Shotgun/Clay Target Shooting and has been hosting this event for 51 years. More than 150 college and universities field either varsity/scholarship or club sports clay target teams.