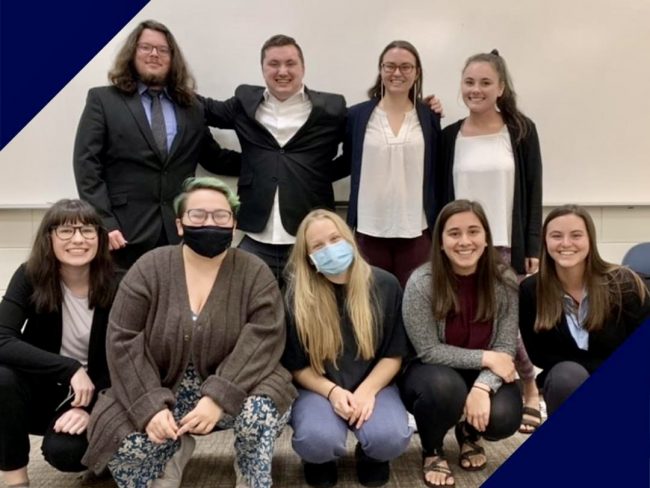 The Georgia Southern University Model Arab League (MAL), made up of 11 students and two faculty advisors, won two awards at the team’s inaugural appearance at the National University Model Arab League (NUMAL) conference in March. Head delegate Emily Zanieski took home the Distinguished Delegation Award for her work in the Summit of Arab Heads of State, and Claudia Hopper and Adam Sikes earned an Outstanding Delegation Award for their work in the Economic Affairs Committee.

Since 2015, Georgia Southern has participated in the MAL, which is a simulation where students from various majors act as representatives from the Arab state the team is representing. At regional and national conferences, students work and compete with other schools to come up with diplomatic solutions to crises the Arab League faces on issues such as climate change and the refugee crisis.

Zanieski, who is a junior history and Arabic double major with a minor in international studies, credits MAL with helping her understand how to implement policy and how governments can affect people.

“As a person who wants to work in public policy and international development after graduate school, Model Arab League helps me learn to craft policy and work with other people who have different ideas than my own,” Zanieski said. “When we represent a country at a conference, we have to put in mind the best interests of the citizens of that country, and that helps shape our own perceptions on effective policy.”

“Through participation in Model Arab League, students learn about the politics and history of the Arab world, and the arts of diplomacy and public speech,” Salhi said. “Model Arab League helps prepare students to be knowledgeable, well-trained and effective citizens as well as civic and public affairs leaders.”

Zaniecki noted that one of her favorite things about going to the MAL conferences is that students don’t have to be Arabic majors or speak Arabic to participate. MAL provides an opportunity to meet a diverse group of students from all over the world.

“While winning awards is always fun, the best part of conference is the friends you make with not only your team but with other students across the country,” she said. “I have friends now from Georgia to Wyoming.”