Statesboro Police Department officers responded Wednesday night to the Garden District Apartments for an unwanted person. Dequar Stephenson was in his girlfriend’s apartment without her permission. Stephenson had active arrest warrants in Statesboro for Theft by Taking, Criminal Trespass, and a Felony Probation Violation warrant, as well as having been granted bond in Richland County, SC on a September 2021 arrest for murder. When officers arrived at the apartment, he closed the apartment door and refused to exit. A perimeter was then established, additional officers were brought in, and SWAT responded. After hours of trying to communicate with Stephenson and deploying gas, SWAT entered the apartment, but he had left through a window. A firearm was located inside the apartment that did not belong to the tenant and was seized by detectives. Officers began searching for Stephenson, and he was found hiding in an apartment at Cambridge the Pines on Lanier Drive. He was arrested without incident and charged with theft by taking, criminal trespass damage to property, and felony probation violation. He remains in the Bulloch County Jail awaiting further judicial action.

On 1/18/22 at 7:30 p.m. SPD Patrol officers responded to the Garden District Apartments for an unwanted person at that location. The legal tenant reported that a former boyfriend, Dequar Stephenson (21, Columbia, SC), was currently inside of the apartment without her permission. Officers were familiar with Stephenson, who had active arrest warrants in Statesboro for Theft by Taking and Criminal Trespass along with a Felony Probation Violation warrant. Stephenson had recently moved to Statesboro from Richland County, SC after having been granted bond in that jurisdiction on a September 2021 arrest for murder.

As officers approached the Garden District apartment, they observed Stephenson inside of the apartment at which point he closed the door and refused to exit. For reasons of officer safety, a perimeter was established, additional officers were brought in, and SWAT was asked to respond. After several hours of trying to establish communication with Stephenson, gas was deployed by SWAT into the apartment. A subsequent forced entry was made by SWAT, however Stephenson was not inside. It is believed that he escaped out of a third story window just prior to the perimeter being established. A firearm was located inside the apartment that did not belong to the tenant and was seized by detectives.

Patrol officers began a concentrated patrol of the surrounding complexes searching for Stephenson. Shortly after midnight, Patrol officers developed information that he may be hiding in an apartment at Cambridge the Pines on Lanier Drive. Officers made contact with the occupants of that apartment, were allowed to enter it, and discovered Stephenson in one of the bedrooms. He was taken into custody without incident and transported to the Bulloch County Jail. He remains there pending further judicial action.

Despite rumors to the contrary, no hostage situation ever evolved during the incident with Stephenson. SPD would like to thank the staff at the Garden District for their cooperation with officers during this incident. 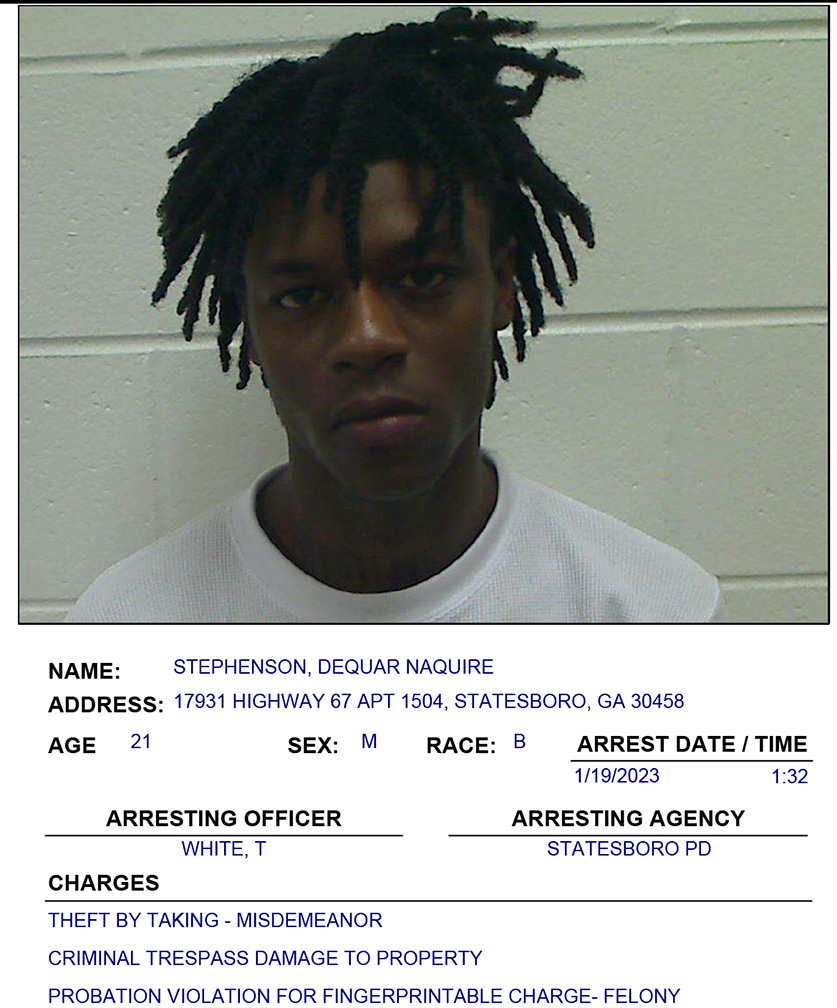