Guyton Man Arrested after Pursuit from Bulloch to Bryan

A response by Bulloch County Sheriff’s Office to the report of a suspicious vehicle led to the suspect fleeing and later being apprehended with the help of drones, GM Onstar, K-9’s, and others.

On June 9th Bulloch County Deputies were dispatched to the Pope Road area for a
report of a suspicious vehicle. Sergeant Jody Deal and Corporal Hunter Oglesby made
contact with the vehicle and attempted to conduct a traffic stop. The vehicle fled from
the Deputies and attempted to strike other law enforcement officers head on as they
responded to assist. The offender was identified as JAMIE RAMON SULLIVAN. It was
determined that SULLIVAN had active warrants for his arrest and was possibly in the
area of Pope Road for the purpose of stalking an ex-girlfriend. Information was also
given to the Sheriff’s Office that SULLIVAN had threatened to harm himself and may
have being trying to orchestrate “suicide by cop”. Deputies also received information
that SULLIVAN may have a history of illegal firearms possession.

After SULLIVAN had fled the area the Sheriff’s Office made contact with G.M. Onstar
for help in locating SULLIVAN. Onstar was willing to provide location information
based on the fact SULLIVAN was determined to be a threat to himself and others.
SULLIVAN was able to drive his pickup truck into a wooded area of Bryan County.
Onstar provided additional assistance by temporarily disabling his vehicle.
Bulloch Sheriff’s Office Canines along with the Sheriff’s U.A.V. (Drone) unit responded
to assist in apprehending SULLIVAN. The location of his vehicle was confirmed by the
drone. The Sheriff’s Emergency Response Team (S.E.R.T.) staged in the area due to
obvious officer safety concerns. S.E.R.T. approached the suspect vehicle and cleared it.
SULLIVAN was subsequently apprehended by the Canine unit without serious incident,
but was determined to be armed with a handgun. He will be charged with felony gun
possession in Bryan County. He was transported to the Bulloch County Jail to face
charges here and may also have charges in Effingham County.

Sheriff Brown would like to commend all units involved in this apprehension including
his Patrol Deputies and all the members of the specialized teams that responded to
assist. He also complimented the work of his communications team during this
incident. They coordinated communications between all the various units and law
enforcement agencies as well as provided information to Onstar. Sheriff Brown said it
was fortunate this incident ended without serious injuries and was thankful another
armed criminal was removed from our community. As always this operation could not
have been accomplished without assistance from other agencies including the Bryan
and Effingham Sheriff’s Offices and the Georgia State Patrol along with other
members of public safety. 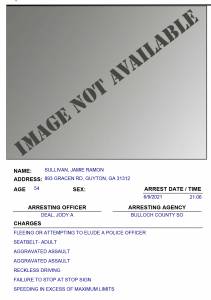