After responding to a disturbance call in Register last night, BCSO deputies discovered a deceased male. Investigators then determined the death was a homicide and identified Anthony Carrasco as the suspect. Carrasco was arrested and remains at the Bulloch County Jail. The investigation is ongoing and no other details have been released. 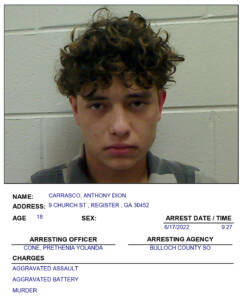 On June 16th, at around 9:24 p.m., Bulloch County Sheriff’s Deputies responded to a 911 call for a disturbance in Register. Upon arrival Deputies made contact with Anthony Carrasco. Upon further investigation Deputies located a deceased male at Carrasco’s residence on Church Street in Register.

The decedent appeared to have been severely beaten. Investigators arrived at the scene and determined that a homicide had occurred. Carrasco was taken into custody and, based on the current information, has been determined to be responsible for the death. This investigation is ongoing. The offender remains in custody at the Bulloch County Jail and there appears to be no other suspects in this case at the present time. The victim’s name will not be released until next of kin notification can be made.

Investigator Pre Cone is the lead investigator in this case. Anyone having additional information about this case is asked to call 912-764-1744.