Lieutenant Caleb New of the Statesboro Fire Department is our latest feature in the First Responder Spotlight Series, brought to you by McKeithen’s True Value Hardware in Statesboro. 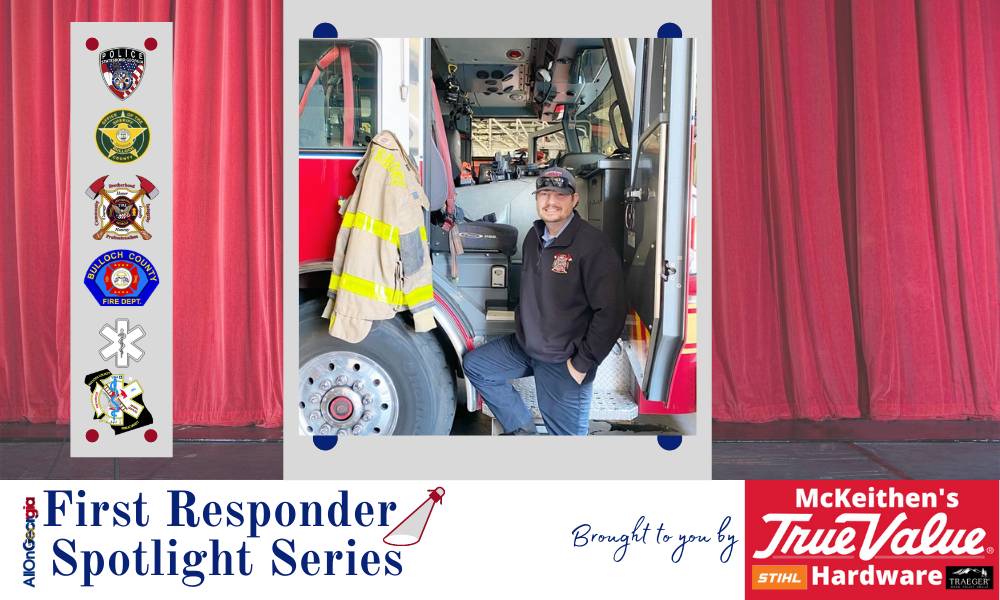 The AllOnGeorgia First Responder Spotlight Series features law enforcement, firefighters, EMS, and other emergency personnel who make it their business to serve our communities, often in ways we never see, each and every day.

The series is sponsored by McKeithen’s True Value Hardware in Statesboro.

Lieutenant Caleb New has been with the Statesboro Fire Department for six years but his firefighting career dates back nine years.

He unexpectedly found himself on the job after getting injured in the military. He has an uncle who works for the Savannah Fire Department but he is otherwise the only first responder in his family, so the job was uncharted territory back then. Now, after a short tenure in a few other places, the Statesboro Fire Department is exactly where he belongs.

New is one of two lieutenants on a shift, alongside two captains, a Battalion Chief and a number of others on his shift, who work 24 hours on and 48 hours off on rotation. That means he and his fellow firefighters work together, train together, eat together, and everything in between. They’ve had to make a few adjustments due to COVID-19, but by and large, they’re able to do their jobs in mostly the same manner and maintain the familial comradery that’s imperative to doing the job well.

A typical day starts with a briefing from the shift that’s headed home, detailing what has transpired over the last 24-hours. From there, anything goes. The Statesboro Fire Department doesn’t run medical calls, but they do respond to car wrecks, assist with entrapments, and, of course, alarm and fire calls inside the city limits plus the adjoining five mile radius just outside the city limits. Most people don’t know that SFD is responsible for Georgia Southern’s campus as well, which can make for higher call volume at times.

A long, busy shift can present its own difficulties at times, especially when it means missing holidays or family events, but the rotation does mean there’s time for rest and quality time with family and friends when he isn’t on the clock. The 30-year-old Bloomingdale native and father of 6-year-old Paxton recently got married to Emily. They also call Statesboro home.

The job itself is rewarding for New, who was promoted to lieutenant roughly two and a half years ago, because the people in the community have confidence in the department. “People drive by our stations and they know we’re here and they know if they call, we’ll come help if something’s wrong. Being able to be a part of that is pretty cool.” He also says the community never lets them feel anything short of appreciated year round. There’s always someone or some organization dropping food and treats on holidays, coming to say ‘thank you,’ or just wishing us a Merry Christmas and what not. I’ve worked in other places where it hasn’t been like that.”

The current shift is one that New has been with for roughly three years. He said in his interview with AllOnGeorgia that he was initially apprehensive a move to a new shift and what it would mean, but shift Battalion Chief Steven Morris has been pushing him in the direction that’s best for him and his strengths since day one – which is one of the reasons he’s been a mentor to New over the last few years. “He’s my boss and I feel like there’s a friendship there, but when it’s time to get serious, it’s time to get serious. And he’s been there for me through a lot.”

New also said the administration at SFD is unmatched as well. “From the Chief down to the Training Captain and the prevention guys, the way that they take care of us is unbelievable and even more so with the virus. They’re just trying to make the work environment have as little stress as possible. In a lot of places, it’s the opposite. Not here. Being able to come in for a shift and knowing that those guys across the hall have our back, and I say that full-hearted, is incredible.”

You may see the firefighters around town right now with bearded faces and mustaches. It’s part of a seasonal fundraiser – Staches for Shaw – done each year honor former Deputy Chief Ronnie Shaw who was diagnosed with Leukemia three years ago. The proceeds go to the Department’s Community Charitable Giving Program fund used to help firefighters and  other first responders, as well as families in the community that may have been displaced by a fire.