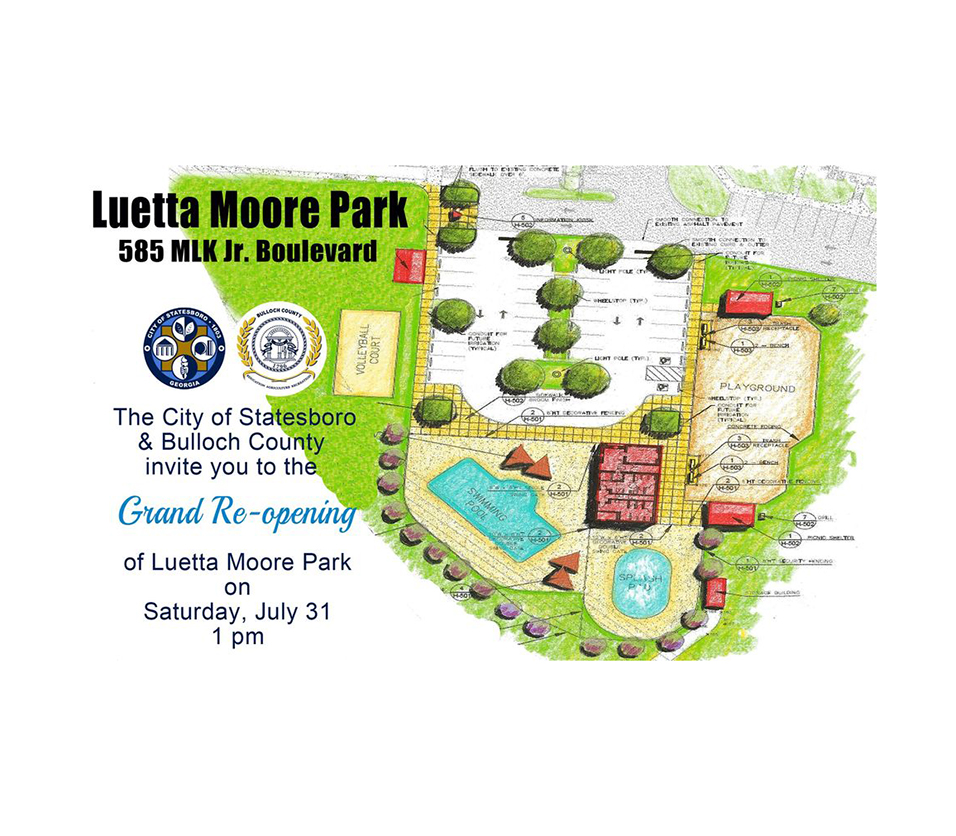 The renovations at Luetta Moore Park on Martin Luther King Drive in Statesboro are complete and a Grand Reopening will be held this Saturday, July 31. The event is hosted by the City of Statesboro and Bulloch County, and is set to begin at 1:00 p.m.

Following the ribbon cutting, there will be fun activities for all.

From the City of Statesboro and Bulloch County Board of Commissioners:

The ceremony will mark the opening of the new swimming pool, splash pad, playground, and volleyball court at the park. Members of the public are invited to bring their swimsuits and enjoy the completely renovated park immediately following the ribbon cutting ceremony. There will also be free hotdogs from 2:00 p.m. to 3:00 p.m. as well as an inflatable bouncy house. The pool and splash pad area will be open from 2:00 p.m. to 5:00 p.m. on Saturday, July 31 and from noon to 5:00 p.m. on Sunday, August 1. Admission to the pool and splash pad will be free during the opening weekend. The park is located at 585 Martin Luther King Jr. Drive, Statesboro, GA.

The additions and renovations at the park are part of a larger $4.5 million improvement project for both Luetta Moore Park and Rev. W.D. Kent Park. Construction began at the parks in early March 2021 but faced some delays due to supply chain disruption and heavy rainfall. Statesboro general contracting firm John Lavender & Associates, Inc. was hired to complete the project. Improvements at Rev. W.D. Kent Park are expected to be finished by early September with weather permitting. Both parks will continue to be under the management of the Statesboro-Bulloch Parks & Recreation Department.

During its last meeting on March 2, 2021, the URA approved a $4.5 million bond resolution through Truist Bank (formerly BB&T) with an interest rate of 1.47% to fund the park improvements. The bond will be repaid through an intergovernmental agreement between the City of Statesboro and Bulloch County. The city has committed $220,000 annually and the county has committed $200,000 annually from the 2019 SPLOST fund to cover the debt through 2024. It is anticipated the future funding of the bond will be proposed as part of the 2024 SPLOST referendum to be considered by Bulloch County voters in November 2024.