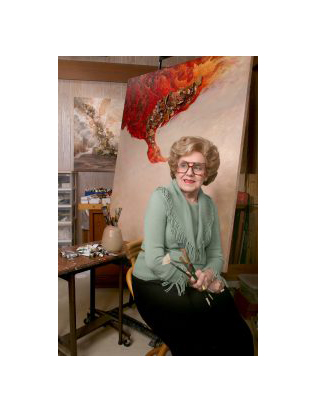 I join with many, many others in the Georgia Southern community who are mourning the passing of Betty Foy Sanders.

Many know her as a former first lady to Georgia’s 74th governor, Carl Edward Sanders Sr., but I knew her as a friend, longtime supporter, and namesake to the Georgia Southern Department of Art.

I was blessed to meet with her several times, and as many around her know, once you spend some time with Betty Foy Sanders, you never forget her spark, passion and love for art. My wife, Jane, joined me on our visit last summer and sang for her…it was a very special afternoon that we will never forget.

A self-described “homegrown” Statesboro, Ga., native, Sanders’ paintings are found in museums, corporations, and private collections around the South, including the Georgia Governor’s Mansion. Though Sanders is certainly well known for her accomplishments, she is equally recognized for her devotion to the advancement of the arts and art education.

When her husband was in the governor’s office, Sanders dedicated her efforts toward the construction of several fine arts buildings in the University System of Georgia. One of those was the Foy Fine Arts Building on Georgia Southern’s campus, named for her father, J.P. Foy.

In 1967, Sanders established the Betty Foy Sanders Georgia Artists Collection, which features the works of various accomplished Georgia artists and is on permanent display at the Center for Art & Theatre on Georgia Southern’s Statesboro Campus.

I’m proud to have known her, and more proud that Betty Foy Sanders Department of Art at Georgia Southern University will forever be a testament to her legacy and impact on this great state.