It was standing room only Thursday evening as the Brooklet City Council gathered for their regular May meeting. Council only barely had a quorum with council members Randy Newman and Russell Davis both absent. 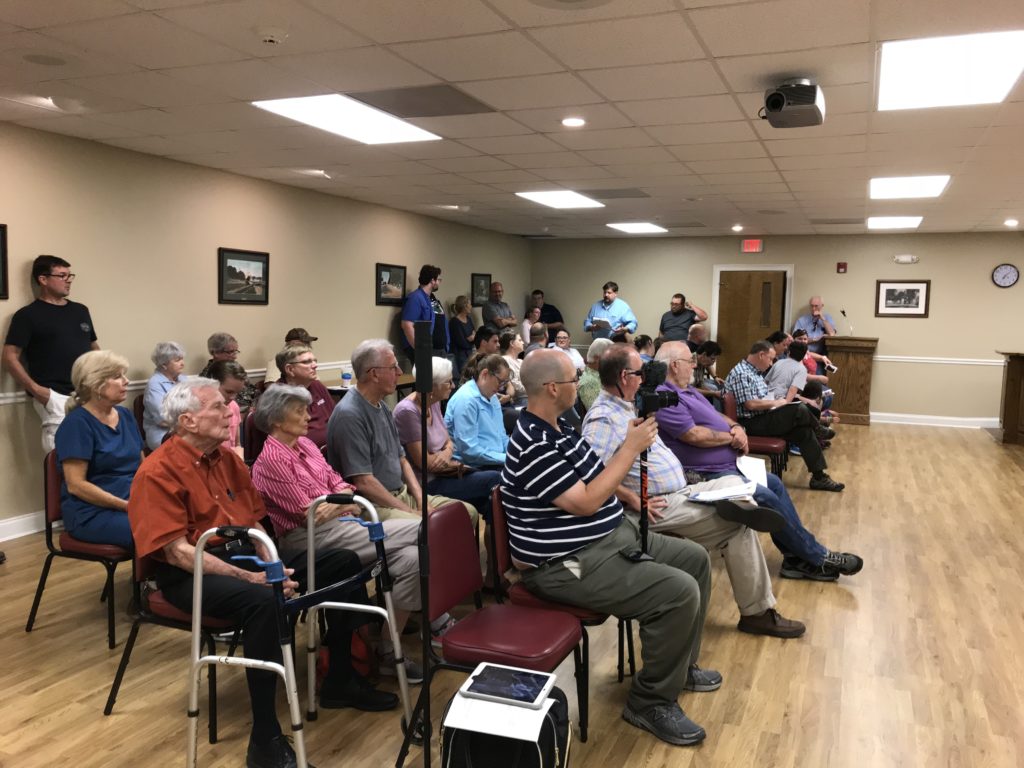 It was standing room only Thursday evening as the Brooklet City Council gathered for their regular May meeting. Council only barely had a quorum with council members Randy Newman and Russell Davis both absent. City attorney Hugh Hunter and City Administrator Angie Wirth were also present.

Upon the completion of the invocation, Mayor William Hendrix asked for someone to make a motion to amend the agenda. Councilman Greg Schlierf made that motion to add a line item to discuss “The Bees’ Knees” and the “bee situation” in Brooklet, a motion that passed unanimously.

Ed DiNello addressed the Council at the beginning of the citizen participation portion of the meeting. He thanked his neighbors for the support they had offered over the last four years and told Council that he and his wife were hurt by the way the events had transpired with the City.

DiNello told Council and the room, which included a number of area beekeepers, that beekeeping was an opportunity for him to give back to his community and neighbors as well as enjoy a hobby. He addressed the aspect of having an LLC from his home, again likening the operation to that of a lawn care or pool service off-site and emphasizing that the production of honey is a by-product.

Randy Newman, who is the council member who asked the city attorney to draft the restrictive ordinance amid all of the controversy, was not present at the meeting. He does work for Bulloch County local government in zoning, though, and DiNello told council members he signed off on the honey house they have for prepping honey for sale — outside the city in unincorporated Bulloch County.

DiNello only touched on the component of the issue that sparked the controversy: the mosquito spray.

Councilman Jim Stanoff said if the bees are traveling, they’ll still be impacted by the spray. He also said that other City residents are paying for spray but not getting a service if they skip certain properties, despite DiNello’s neighbors being present at the meeting to say they support the skipping of their property. Stanoff said he was worried about the children getting stung by the bees.
“But I love honey,” he noted.

Attorney Hugh Hunter said he wanted to offer a dissertation, speaking on the matter for almost 10 minutes. “We can’t just be willy nilly enforcing our ordinances.”

Hunter said the DiNellos are in violation of the city zoning ordinances with the current operation, but that he discovered that there may be a way they can work together to allow the operation to continue under the existing zoning ordinance. He said a special exception could be granted to allow agriculture use in the residential district if the neighbors, Planning & Zoning Commission, and Council approved it.

Hunter did not mention why the city sent a cease & desist letter to the DiNellos before attempting to work out the special exception.

Schlierf said the problems are two-pronged: first that DiNello is running an agricultural operation in a residential district and that he is operating a home-based business without a license. He said that he was learning a lot in the meeting and it was more informative than the “Facebook world,” despite the City’s initiation of the dispute before speaking with the DiNellos on the matter, and asking DiNello to go through the lengthy process of a special use exception. It passed unanimously.

Schlierf made a motion to ask the City to begin the process of initiating a special exception, a process that can take up to three months, but the city will avoid spraying the area until September 1st while the issue is sorting everything else. The council made a motion to that effect.

Another beekeeper in the city limits rose and asked if he would be impacted and need to file for a special exception too, illustrating that the city has not been enforcing the zoning ordinances equally. City officials said they were unaware of so many other beekeepers.

Schlierf suggested allowing the DiNellos to sort out their issue and the address the others. “Communication is key,” he said.

The council did not discuss the ordinance that was drafted at the direction of Newman.

You can read background on the issue below: