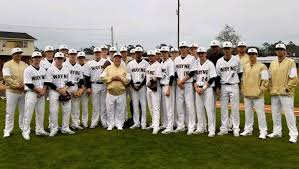 Most high school baseball players dream of playing in the major leagues one day.

It remains to be seen if anyone on this year’s Wayne County team will ever make a big-league club, but after this coming Saturday, everyone on the Yellow Jackets’ current roster will be able to say they were part of a game played in a major-league stadium.

That’s because the Jackets are set to take on Locust Grove at 1 p.m. Saturday at SunTrust Park, the home of the Atlanta Braves.

The Jackets are stoked about the opportunity.

“A lot of the kids in our program have actually never been to a Braves game,” said Wayne County coach Justin McDonald. “This will give them the chance to see the stadium and play on their field.”

McDonald, a lifelong Braves fan, is equally excited about coaching in Saturday’s game. This will be his first trip to SunTrust Park which opened last season, replacing Turner Field as the home venue for the Braves.

“I’ve been watching their games this week, trying to see where (Braves manager) Brian Snitker sits in the dugout,” the coach said. “I want to sit in the same spot.”

The Wayne County-Locust Grove match-up is one of four prep games being played this weekend at the Braves stadium. On Friday night, Ola is set to take on Union Grove. Ola is the fourth-ranked team in Class 5A while Union Grove is getting votes in the poll by the Georgia Dugout Preview Magazine.

Both are teams the top-ranked Jackets could see in the state playoffs later this spring.

“We’re going to watch that game,” McDonald said of the Ola-Union Grove contest. “We’ll get to see two teams we may play in the playoffs, but I also want our kids to see the stadium so they aren’t big-eyed about it on Saturday.”

On Saturday, three games will take place at SunTrust. The first game is set for 10 a.m. and will pit Mount Paran Christian against Holy Innocents, two of the top teams in Class A Private.

Of course, the Jackets will take the field against Locust Grove in the middle game before Buford and West Forsyth round out the schedule at 4 p.m.. Buford is currently ranked fifth in Class 5A.

“The Braves are putting this on,” McDonald noted. “It’s a public relations and marketing deal. They get their tickets out there and also give the kids a chance to come out and play on their field.”

The teams participating in this weekend’s games had to purchase 2,500 general admission tickets to various Braves home games during the 2018 season. Those were $4 each, meaning each team had to come off $10,000 from its budget.

The teams are allowed to sell those same tickets for $8 each which includes admission to the games this weekend. Thus, the respective teams can make $10,000 off the deal if they sell their entire ticket allotment.

McDonald said Wayne County already has sold most of its tickets. He added that the Jackets purchased 1,000 tickets to Atlanta’s game against the Los Angeles Dodgers scheduled for 1 p.m. on July 29. That is the same day that former Braves star Chipper Jones will be inducted into the National Baseball Hall of Fame. The Braves will show his induction speech at the stadium that afternoon.

McDonald said the Jackets bought 500 tickets to three other Braves games to make up the total required.

“Most of the games we picked were weekend games or summer games, making it easier for people to get there when school’s out,” he said. “A lot of church youth groups have bought them and little-league teams, too.”

McDonald expects a good crowd to follow the Jackets to Atlanta this weekend, largely because the opponent will be Locust Grove, the same team that Wayne County defeated last year in three games in the state semifinals with the third game going 10 innings.

Also this year, the Jackets defeated the Wildcats 3-0 in Jesup on Feb. 23. McDonald said that game drew a crowd of about 1,000. Last year, he said close to 3,000 fans went to Locust Grove with the team for the playoff series.

“That’s just the mentality of the people here,” he said. “When they see blood in the water around here, they’re going to watch the game.”

Wayne County took a 17-4 overall record into Wednesday night’s non-region game at Richmond Hill. Locust Grove, which is receiving votes for the Class 5A poll, was 15-8 going into their game Wednesday against Buford.

Saturday’s weather forecast for Atlanta calls for a 90 percent chance of rain early. McDonald hopes they can get the game in, even if it is delayed until later in the afternoon.

“We’ve got a chartered bus and hotel rooms for Friday night, so hopefully the rain clears out and we can play and not spend all that money for nothing,” the coach said. “We’re taking everyone, the junior varsity and varsity, so our entire program is going to be involved.”

Saturday’s game will be broadcast by Big Dog Country WIFO 105.5 in Jesup with Bob Morgan, longtime voice of the Jackets, on the call.