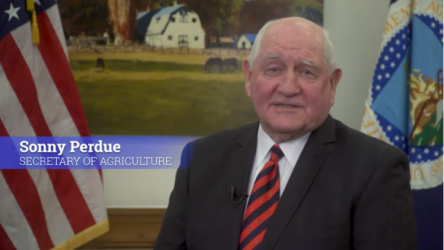 The proposed rule ensures that USDA-supported social service programs are implemented in a manner consistent with the Constitution and other applicable federal law, and it also builds on Secretary Perdue’s 2017 Policy Statement on First Amendment that reestablished USDA’s commitment to safeguarding every American’s First amendment rights.

“Our nation was founded on the bedrock of religious liberty and the right of every person to pursue their desired faith without government interference. As a government agency, it is incumbent upon us to respect the rights of our citizens with every action our USDA employees undertake,” said Secretary Perdue. “The men and women of American agriculture are the salt of the earth and know how important preserving our rights as Americans is to the success of future generations. The freedoms to think, speak, and assemble are essential to our system of government and are the keys to why America is flourishing.”

Under current regulations that govern USDA supported programs, religious providers of social services—but not other providers of social services—must make referrals under certain circumstances and must post notices regarding this referral procedure.  These regulatory burdens had been required by then-President Obama’s Executive Order No. 13559 (Nov. 17, 2010).  Consistent with President Trump’s Executive Order No. 13831 (May 3, 2018), the USDA’s proposed rule would eliminate them from USDA regulations.  As the USDA’s proposed rule observes, these burdens were not required by any applicable law, and because they were imposed only on religious social service providers, they are in tension with recent Supreme Court precedent regarding nondiscrimination against religious organizations.  The proposed rule also will foreclose other unequal treatment of religious organizations by ensuring that they are not required to provide assurances or notices that are not required of secular organizations.

The proposed rule incorporates the Attorney General’s 2017 Memorandum for All Executive Departments and Agencies, Federal Law Protections for Religious Liberty.  That memorandum was issued pursuant to President Trump’s Executive Order No. 13798 (May 4, 2017), and it guides all federal administrative agencies and executive departments in complying with federal law.

This is a press release from the USDA