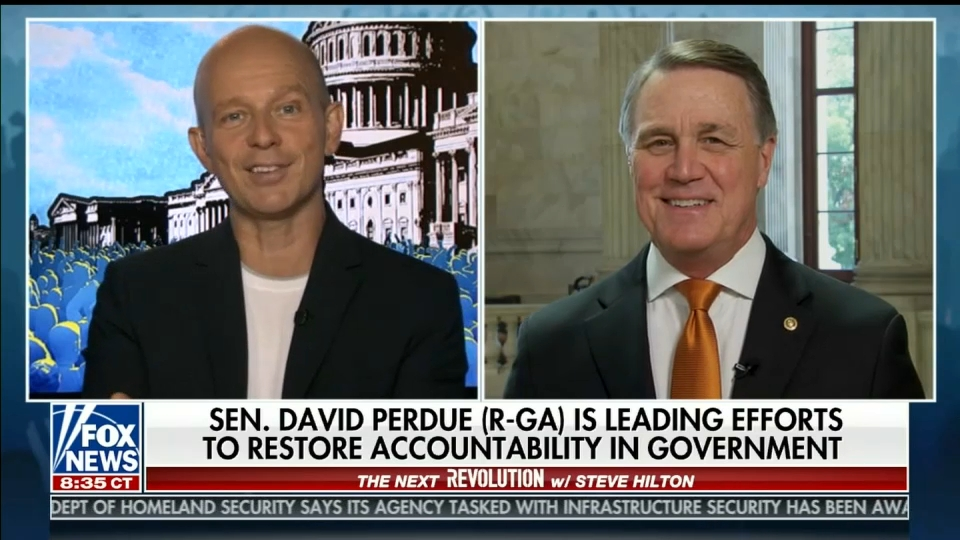 “Here in, accountability is a foreign language.”

U.S. Senator David Perdue (R-GA) joined Steve Hilton on Fox News’ The Next Revolution to discuss the MERIT Act, his proposal to cut government waste and restore accountability to the federal workforce.

Running Agencies Like A Business: “The MERIT Act takes the same standards applied in the private sector and extends it to all federal agencies. It allows agency directors to remove an employee for cause through due process. This bill will help agencies run like a business, just like the rest of us in the real world.”

Accountability Is A Foreign Language: “When I first got elected in 2015 as a business guy, I kept wondering why federal employees were being held less accountable for their work standards than the people they worked for. I was a CEO for two major corporations. Believe me, the board held me accountable. I held my senior team accountable, and they held their teams accountable. That’s what the real world does. Here in Washington, the idea of a work standard and accountability is a foreign language.”

No Accountability, No Urgency: “We’ve removed 2,000 plus regulations under President Trump, but the new laws that we put in its place have to go through the bureaucracy. Without accountability there, there’s no sense of urgency. It’s inconsistent, and there’s no level playing field between the people in the real world, taxpayers in America, and the bureaucracy of the swamp in Washington.”

What Worked For The VA: “In 2017, we unanimously passed a bill to allow the Department of Veterans Affairs director to remove people for cause, and since then, over 4,300 people have been removed, demoted, or suspended. Now, the VA’s service is getting better, and satisfaction is going up.”