In both instances, Mr. Brown contends that he was brought to the campus police chief’s office, and was intimidated by the police chief and other campus officials. After these incidents, Mr. Brown says that he stopped engaging in expressive activity on campus for fear of disciplinary action or arrest. 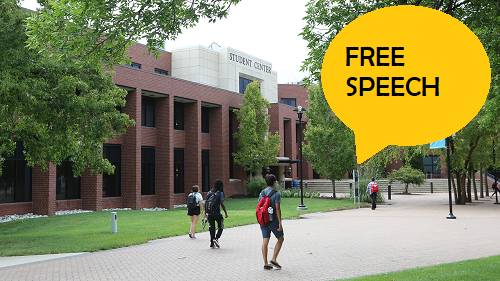 The Justice Department has filed a Statement of Interest in a federal lawsuit in Mississippi, explaining that public colleges cannot trample on their students’ First Amendment rights to free speech.

The lawsuit is brought by a student organization and J. Michael Brown, a former student at Jones County Junior College, a public institution of higher education in Mississippi. The college’s policies require campus administrators to preapprove all “meetings or gatherings,” and Mr. Brown alleges that college officials called the campus police on him when he sought to engage on campus with fellow students about topics such as free speech and civil liberties.

“The United States of America is not a police state,” said Assistant Attorney General Eric Dreiband for the Civil Rights Division. “Repressive speech codes are the indecent hallmark of despotic, totalitarian regimes. They have absolutely no place in our country, and the First Amendment outlaws all tyrannical policies, practices, and acts that abridge the freedom of speech.”

“Unconstitutional restrictions on our first freedoms to speak and assemble directly threaten our liberty as Americans,” said United States Attorney Mike Hurst for the Southern District of Mississippi. “While some may disagree with the content of one’s speech, we should all be fighting for everyone’s Constitutional right to speak. I pray JCJC will do the right thing, change its policies to comply with the U.S. Constitution, and encourage its students to speak and assemble throughout our free state.”

“This is yet another concerning example of students encountering limits on what, when, where, and how they learn,” said U.S. Secretary of Education Betsy DeVos. “This is happening far too often on our nation’s campuses. This Administration won’t let students be silenced. We stand with their right to speak and with their right to learn truth through the free exchange of ideas—particularly those with which they might disagree.”

Jones County Junior College’s speech policies require students to schedule all meetings and gatherings on campus with college administrators at least three days before the event. College officials reserve the right to schedule or not schedule any activity, and there are no exceptions for even the tiniest of meetings or gatherings.

Violations of the college’s speech policies can be grounds for student discipline, which may include expulsion from school. In his lawsuit, Mr. Brown alleges that campus officials twice called the campus police on him as he and one or two others spoke with students on the college’s open central quadrangle about free speech, civil liberties, and marijuana legalization.

In both instances, Mr. Brown contends that he was brought to the campus police chief’s office, and was intimidated by the police chief and other campus officials. After these incidents, Mr. Brown says that he stopped engaging in expressive activity on campus for fear of disciplinary action or arrest.

The government’s Statement of Interest points to Supreme Court case law explaining that the First Amendment rights of speech and association extend to the campuses of state universities. While Jones County Junior College’s “extreme preconditions to speech might not be out of place in Oceania, the fictional dystopian superstate in George Orwell’s Nineteen Eighty-Four,” the Statement of Interest explains, “[t]he First Amendment to the United States Constitution . . . ensures that preconditions like these have no place in the United States of America.”

USDA: SNAP Restored to Idea of “a Second Chance, Not A Way of Life”
Trump Administration Proposes New Rules to Increase Accountability and Availability of the Organ Supply