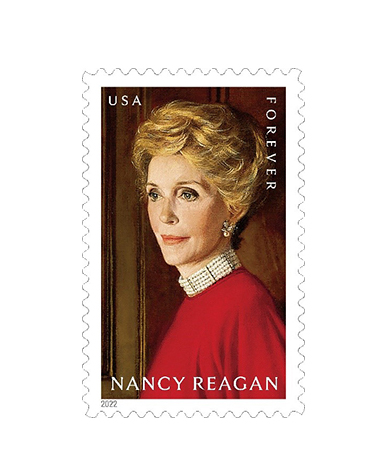 Today at the White House, the U.S. Postal Service revealed the artwork of a commemorative Forever stamp to celebrate the centennial of former First Lady Nancy Reagan’s birth.

The dedication ceremony for the Nancy Reagan Forever stamp will be held July 6 — the 101st anniversary of her birth and the culmination of her centennial year. The event will take place at the Ronald Reagan Presidential Library and Museum in Simi Valley, CA.

“Through our stamp program, the Postal Service seeks to commemorate and celebrate the very best of America, and Nancy Reagan truly represents that ideal,” said Postmaster General DeJoy. “The Postal Service takes great pride in our mission to bind the nation together and through the issuance of the Nancy Reagan stamp, we hope to provide the means for the public to come together in remembrance and commemoration of this great and impactful American. I, along with the 650,000 women and men of the United States Postal Service, am proud to honor First Lady Nancy Reagan with this stamp.”

Petersen said of the stamp, “Nancy Reagan brought grace and honor to her role as first lady. She was fiercely loyal to her husband and her country, always placing them first. I am sure she would be humbled by this special tribute!”

Ron Reagan, son of Ronald and Nancy Reagan, who was unable to attend the event, said, “Her own stamp! I’m sure she never expected to receive an honor like this. Neither did she expect to be flying all over the country stuck to the front of envelopes. She would, of course, have reacted modestly to this wonderful commemoration. But secretly she would be very pleased. On her behalf, I thank you.”

Nancy Davis Reagan (1921–2016), wife of the 40th president, was First Lady of the United States from 1981 to 1989. Her husband’s most trusted adviser and champion, she was an important part of one of the most pivotal presidencies of the 20th century.

Throughout her life, Reagan held a deep passion for her country, championing many causes along the way. Chief among these were the Foster Grandparents Program; Vietnam veterans and the plight of POWs and MIAs; drug and alcohol abuse prevention among youth; breast cancer awareness; and Alzheimer’s research.

As First Lady, she worked hand in hand with her husband, both at home and abroad, and advocated for issues on both the national and international stage. Reagan’s partnership with her husband and devotion to his success, behind the scenes influence, and her legacy of public service made her one of the most significant first ladies in modern times.