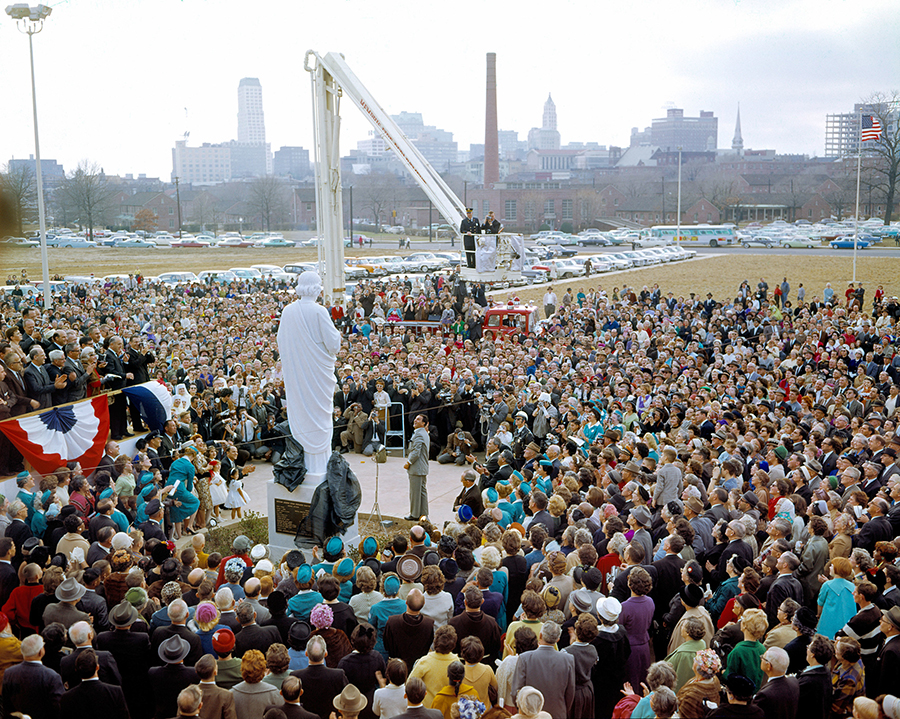 A crowd gathers on Feb. 4, 1962 for the opening of St. Jude Children's Research Hospital in Memphis, Tennessee.

When St. Jude Children’s Research Hospital® founder Danny Thomas opened St. Jude on Feb. 4, 1962, he created an organization as rare today as it was then: a research hospital where children with catastrophic diseases receive free cutting-edge medical care.

St. Jude is celebrating its 60th anniversary with a year-long slate of events commemorating the legacy of advances in the understanding and treatment of pediatric cancer and other deadly diseases. As one of the largest and most beloved health care charities in the country, St. Jude is a unique organization, blending clinical care with scientific research. At the same time, the organization’s leaders are laying the groundwork across scientific, clinical and global operations that will prepare the institution for another 60 years.

“We remain committed to the vision of Danny Thomas,” said James R. Downing, M.D., President and CEO of St. Jude. “In answering the charge of finding cures and saving children, St. Jude has launched the largest strategic expansion in its history to further scientific knowledge, increase cure rates and develop global networks to improve access to pediatric cancer care.”

“My father would be filled with gratitude – as am I – for the incredible kindness and generosity of every single St. Jude supporter,” said Marlo Thomas, National Outreach Director for St. Jude Children’s Research Hospital. For six decades, his legacy has been lovingly passed on from one generation to the next. The dedication of so many extraordinary people enables St. Jude to continue breaking barriers in treatment and cures for our precious families – that was my father’s dream and that is exactly what every child in America and around the world deserves.”

As a struggling young entertainer, Danny Thomas made a desperate plea to St. Jude Thaddeus, the patron saint of lost causes, vowing that if the saint helped him find his way in life, he would build a shrine in gratitude. When success arrived, Thomas was true to his word based on advice and input from a diverse set of experts he consulted, founding St. Jude as a beacon of hope to the sickest of children. Since then, his children and grandchildren in partnership with many other visionary leaders have inspired new generations of St. Jude supporters. Such support has allowed St. Jude to grow into one of the largest pediatric cancer research hospitals in the world.

Thanks to millions of donors cultivated by ALSAC, St. Jude continues to honor its commitment to research and world class care grounded in a founding promise: that no family receives a bill from St. Jude for their child’s treatment, travel, housing or food, so they can focus on helping their child live.

“At our institution, we often ask, ‘If not St. Jude, then who?'” Downing said. “It is our responsibility to leverage our collective knowledge, talents and resources to tackle the unanswered questions that will help children in our hospital and far beyond.”

In 1962, the medical establishment generally assumed that acute lymphoblastic leukemia (ALL), the most common pediatric cancer, was uniformly fatal. To treat the cancer, clinicians gave one drug after another with temporary success. Soon after its founding, St. Jude launched the Total Therapy clinical trials, an unconventional approach to fighting leukemia.

These studies combined multiple anti-cancer drugs along with radiation therapy to prevent relapse. Within 10 years, St. Jude raised the survival rate for ALL from 4% to 50%. This was the first significant cure rate for generalized cancer and for drug treatment of cancer. Building on this discovery over the course of decades, doctors have raised the survival rate to 94% today at St. Jude.

During the past 60 years, St. Jude research has yielded insights into how normal cells work and how alterations within their DNA contribute to the development of cancer and other childhood catastrophic diseases. This knowledge has served as the basis for improvements in diagnosis and treatment, helping to push the overall childhood cancer cure rate from 20% when the hospital opened to more than 80% today.

The next 60 years will be shaped significantly by the scientific and clinical programs outlined in the recently launched six-year $11.5 billion St. Jude strategic plan. Through the plan, the hospital is adding 1,400 more jobs; investing $1.9 billion in construction, funding renovation and capital needs; and pursuing new avenues of research for sickle cell disease, pediatric neurological disorders and infectious diseases that affect children.

The plan also triples investments to fund St. Jude Global, a worldwide initiative launched in 2018, to reach 30% of the childhood cancer burden. This is complemented by a partnership with the World Health Organization and others to increase survival rates to 60% in low- and middle-income countries for six common cancers by 2030. The collective has already begun work on the Global Platform for Access to Childhood Cancer Medicines, which will create a pipeline, supported by a $200 million investment from St. Jude, that provides an uninterrupted supply of quality cancer drugs to participating centers in low- and middle-income countries. The program is expected to impact as many as 120,000 young cancer patients in 50 countries by 2027. 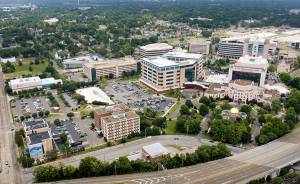 In 2022, St. Jude is celebrating its 60th anniversary with a yearlong slate of events commemorating the legacy of advances in the understanding and treatment of pediatric cancer and other deadly diseases.

“St. Jude Children’s Research Hospital would not be able to carry out its lifesaving mission without millions of generous supporters who give what they can — from kids donating Trike-A-Thon proceeds to St. Jude Heroes running marathons and to entire corporations uniting with their customers to give back,” said Richard C. Shadyac Jr., President and CEO of ALSAC, the fundraising and awareness organization for St. Jude Children’s Research Hospital. “And with our supporters behind us, we’ll be able to impact more kids across the world through St. Jude’s six-year, $11.5 billion strategic plan to accelerate treatment and research — with plans for more in the future.”

St. Jude will mark 60 years of lifesaving work with a series of initiatives and events throughout 2022 centered on the theme ‘The Purpose That Unites Us.’

The 60th anniversary celebrations include a special commemoration of the life of Rudolph Jackson, M.D., who died in 2021.

Dr. Jackson was among the first Black doctors at St. Jude. His pioneering research and community programs addressing sickle cell anemia, malnutrition and lack of access to medicine formed the basis of the federal government’s efforts to fight sickle cell disease and served as the prototype for WIC, the federal initiative for women, infants and children. Visit St. Jude Legacy to learn more about Dr. Jackson’s path to St. Jude and his nationally-impactful research.

St. Jude will honor Dr. Jackson by naming a space on its campus after him. Supporters wishing to make a gift to commemorate his legacy can do so here.

The Purpose That Unites Us: Hear from those who live and breathe the St. Jude mission

Beginning Feb. 4, 2022, audiences can hear stories from The Purpose That Unites Us, a project showcasing videos and audio recordings from 60 donors, volunteers, researchers and patient families talking about why they support St. Jude.

The project includes stories from people like West Coast muralist Robert Vargas, who sees parallels between the work of St. Jude and the unifying themes of his own artwork, and Amar Gajjar, M.D., Chair of the Department of Pediatric Medicine at St. Jude. Dr. Gajjar came to St. Jude from India for a one-year assignment and never left. In his featured profile, he talks about how he was encouraged by a mentor to make pediatric cancer his life’s purpose and the progress he has seen over the years toward this purpose.

Fundraising events such as the St. Jude Detroit Gala on April 22 and the St. Jude Diamond Jubilee in Washington, DC, on June 11 will offer supporters an unforgettable evening as they see the St. Jude story unfold around them and develop a deeper connection with its mission. All the events will follow local and federal COVID-19 guidelines to ensure the health and wellness of participants.

At each gala, guests can witness milestones in the history of St. Jude and experience key moments in patient life via audiovisual projections, 300-degree video screens and even towering sculptures. Guests begin this immersive experience by walking up to a life-size statue of St. Jude Thaddeus while they listen to a recording of Thomas issuing his fateful prayer. They can also experience the sights, sounds, and celebrations of a No More Chemo Party, listen to live singing from a classical children’s choir as they walk through a tunnel of animated patient art and snap a picture at a photo booth as they attend a St. Jude Teen Formal.

Learn more about the 60-year history of St. Jude and how you can be part of the next 60 years.