The Shelley House became the subject of the landmark 1948 United States Supreme Court’s unanimous decision, Shelley v. Kraemer, which is one of the defining moments in the civil rights movement and U.S. Constitutional law.

It joins 5 other sites in the network. 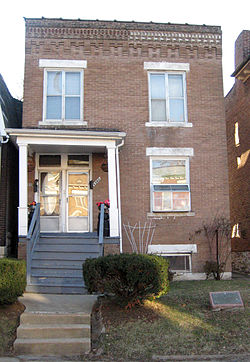 U.S. Secretary of the Interior David Bernhardt announced the designation of the Shelley House into the African American Civil Rights Network. The Shelley House became the subject of the landmark 1948 United States Supreme Court’s unanimous decision, Shelley v. Kraemer, which is one of the defining moments in the civil rights movement and U.S. Constitutional law. The Court ruled that the state’s enforcement of racial discrimination in housing violated the Equal Protection Clause of the Fourteenth Amendment of the United States Constitution.

“The African American Civil Rights Network brings to light the complex and multifaceted stories of African American civil rights advocates, activists, and leaders like Dr. Martin Luther King, Jr. and members of the Shelley family,” said U.S. Secretary of the Interior David Bernhardt. “This home is a tangible representation of the strength and persistence shown by many civil rights leaders to defy racial oppression and stand for equal rights. I am honored to add this pivotal site and story to the Network.”

In 1930, J. D. Shelley, his wife, and their six children moved to St. Louis from Mississippi to escape the pervasive racial oppression of the South. When the Shelley’s purchased their home, it was subject to a restrictive covenant that excluded African Americans and Mongolians from taking title or occupancy, as many buildings in St. Louis did at that time. Although the seller did not impose the covenant, Mr. Louis D. Kraemer, owner of nearby property covered by a restrictive covenant, sued in the St. Louis Circuit Court to enforce. The U.S. Supreme Court overruled all the Missouri State courts’ decisions from enforcing the racially restrictive covenant. The Court’s ruling was a catalyst for significant changes around the country in housing access for minorities.

“The Shelley family’s courageous fight for racial equality led to a landmark Supreme Court ruling and a turning point in our nation’s history,” said Senator Roy Blunt. “I’m grateful for the efforts of Congressmen Clay and Smith to authorize the African American Civil Rights Network. By preserving the places where our nation’s history unfolded, like the Shelley House, we will always remember the hard-fought struggle of the Civil Rights Movement and carry those lessons forward.”

“Places like the Shelley House recognize the courage and sacrifices of the brave souls from all walks of life who endured violence, hatred, and oppression as they fought to make the promises enshrined in our constitution finally ring true for every American, regardless of the color of their skin,” said Rep. Lacy Clay. “And today, the Shelley House becomes the first place in the State of Missouri to be officially designated by the Department of the Interior for inclusion on the African American Civil Rights Network.”

The struggle for racial equality is told through powerful places, people, and moments in history. To commemorate, honor, and interpret the African American civil rights movement, the National Park Service is now accepting nominations for inclusion in the African American Civil Rights Network, a collection of properties, facilities, and interpretive programs with connections to the movement between 1939-1968. The African American Civil Rights Network Act of 2017 was sponsored by Congressman Wm. Lacy Clay and signed into law by President Donald J. Trump (Public Law 115-104) in January of 2018.

The Shelley House joins five other sites in the Network: