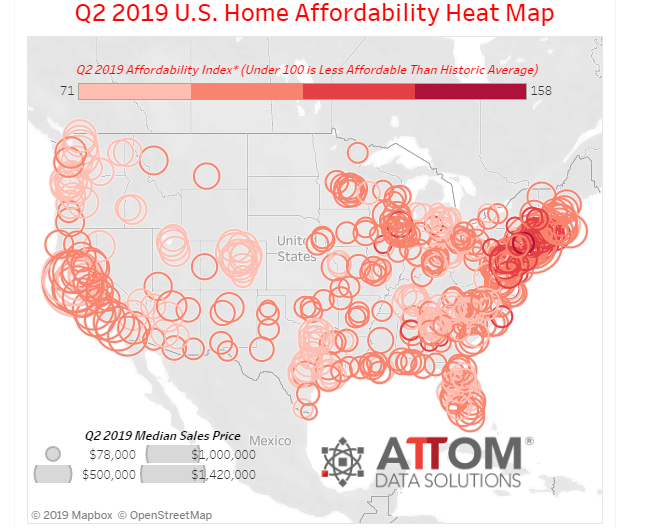 A new report released at the beginning of the month indicates that the median-price of homes in 74% of U.S. housing markets are not affordable for average wage earners.

The information was released as part of a 2019 Q2 report by ATTOM Data Solutions, a nationwide property database, which considered 480 counties across the country.

The findings indicate that 353 counties of the 480 analyzed were home to housing prices unaffordable for someone earning average wages.

The report determined affordability for average wage earners by calculating the amount of income needed to make monthly house payments — including mortgage, property taxes and insurance — on a median-priced home, assuming a 3 percent down payment and a 28 percent maximum “front-end” debt-to-income ratio. That required income was then compared to annualized average weekly wage data from the Bureau of Labor Statistics. (More here)

A few key findings from the full report:

The US Department of Housing and Urban Development (HUD) reported last month that new residential home sales had slowed slightly in May over the April numbers. At that time, The median sales price of new houses sold in May 2019 was $308,000. The average sales price was $377,200.