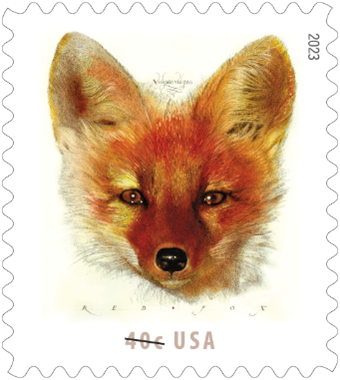 Thursday, the U.S. Postal Service released a 40-cent stamp featuring the red fox, a common sight in most of the continental United States. The stamp was issued in Fox, AR, without a dedication ceremony.

Sold in panes of 20 and in self-adhesive coils of 3,000 and 10,000, the Red Fox stamp is intended for use by bulk mailers for items such as circulars, newsletters and catalogs. It can also be used by customers who enjoy using a variety of stamps on their envelopes and packages.

This new stamp features a pencil-and-watercolor illustration of a red fox. The handsome face of this wild canid is from preexisting artwork by Dugald Stermer (1936–2011). Stermer masterfully captured the fox’s softness, striking coloration and gaze toward the viewer. His calligraphic labels in the stamp’s white background, under the animal’s face and between its alert ears, provide the common and scientific names, respectively: “RED FOX,” in widely spaced capitals, and “Vulpes vulpes.” In tan, centered below the artwork, the stamp reads “40c USA,” in a sans-serif typeface. Art director Ethel Kessler designed the stamp.

The range of the red fox covers almost all of the United States, including Alaska. This wild canid is absent only from Hawaii and parts of the Southwest. Highly adaptable, foxes are found not only in woodlands and open country but also in suburbs and cities, where they have learned to scavenge for a wide variety of food. Fox species can be found over much of the Earth, and the red fox is the widest ranging. Although the red fox can also be colored gray or white, it is named for its most common rusty coloration. This pigmentation typically includes darker forelegs and white fur both on the animal’s underside and on the tip of its bushy tail. In chilly weather, the tail, or brush, serves as a comforter when the fox curls up to sleep. Foxes often rest during the day and hunt at night.

Red foxes are versatile omnivores. They favor rabbits and other rodents and also partake of birds, fish, insects and invertebrates, as well as nuts, roots, berries and more.