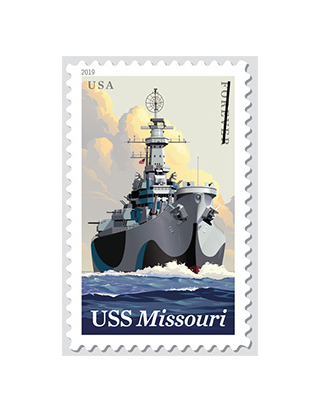 On the 75th anniversary of her commissioning, the famous American battleship USS Missouri (BB-43), will sail again via the nation’s mailstream with the issuance of the USS Missouri Forever stamps.  The U.S. Postal Service dedicated the stamps today during a ceremony on her deck pier side in Pearl Harbor. The public is asked to share the news on social media using the hashtag #USSMissouriStamps.

“The USS Missouri is one of the most famous Naval battleships to ever sail the sea and now the Postal Service is proud to add her to our roster of commemorative stamps,” said Jeffrey C. Johnson, U.S. Postal Service acting enterprise analytics vice president, who dedicated the stamp. “As a graduate of the U.S. Naval Academy, I had the honor to serve in the United States Navy and I recognize the importance this great ship brings to American history and this Forever stamp will continue to help tell that vital story.”

The USS Missouri was commissioned on June 11, 1944. As a fast battleship, shewas affectionately nicknamed “Mighty Mo.” She was heavily armed and armored and capable of very high speeds for a vessel her size.

She joined the military efforts of the United States in the Pacific theater of operations during the last months of World War II. On Sept. 2, 1945, in a ceremony that was broadcast around the world, USS Missouri played one of the most momentous roles in the conflict when military officials from the Allied powers and imperial Japan convened on her deck and signed the documents confirming Japan’s surrender and ending the war.

USS Missouri earned numerous combat awards and citations during her decades of service, which also included deployments during the Korean War and Operation Desert Storm. Decommissioned for the second and final time in 1992 and removed from the Navy’s ship registry in 1995, USS Missouri now rests as a memorial and museum at the Battleship USS Missouri Memorial in Pearl Harbor, Hawaii.

The stamp art depicts USS Missouri from a low vantage point almost at sea level, cutting through the water at a moderate speed commensurate with entering or leaving port. Large and imposing in the frame, USS Missouri is shown in the disruptive camouflage she wore from her commissioning until a refit in early 1945. Clouds loom in the background, tinged with gold and rose from the sun’s rays.

Designed by art director Greg Breeding, the stamp features a digital illustration created by Dan Cosgrove.
The USS Missouri stamp is being issued as a Forever stamp. This Forever stamp will always be equal in value to the current First-Class Mail one-ounce price.

Postal Products
Many of this year’s other stamps may be viewed on Facebook,  Instagram, or via Twitter. A video of the ceremony will be available on Facebook.com/usps.

Customers may purchase stamps and other philatelic products through the Postal Store at usps.com/shop, by calling 800-STAMP24 (800-782-6724), by mail through USA Philatelic, or at Post Office locations nationwide. Forever stamps will always be equal in value to the current First-Class Mail 1-ounce price.

Information on ordering first-day-of-issue postmarks and covers is found at usps.com/shop under “Collectors.”