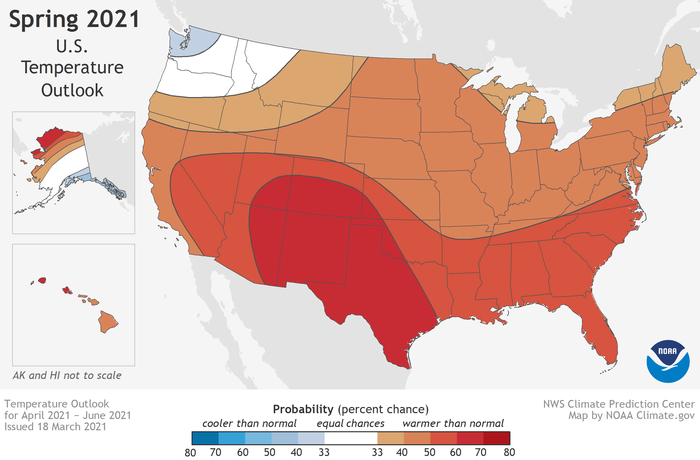 NOAA has released the Spring Outlook for 2021 – Expectations for Temperature, Precipitation, Drought, and Flooding

Nearly one-half of the country — stretching from the Pacific Coast to the Great Plains and upper Midwest — is currently experiencing moderate to exceptional drought conditions, and that is expected to continue and expand, according to NOAA’s U.S. Spring Outlook released today.

Drier conditions in the Southwest U.S. associated with La Niña and the failed 2020 summer monsoon have been contributing factors to the development and intensification of what represents the most significant U.S. spring drought since 2013, which will impact approximately 74 million people.

“The Southwest U.S., which is already experiencing widespread severe to exceptional drought, will remain the hardest hit region in the U.S., and water supply will continue to be a concern this spring in these drought-affected areas,” said Mary Erickson, deputy director of the National Weather Service. “This is a major change from recent years where millions were impacted by severe flooding. Nonetheless, NOAA’s forecasts and outlooks will continue to serve as a resource for emergency managers and community decision-makers as they navigate all potential extreme seasonal weather and water events.” 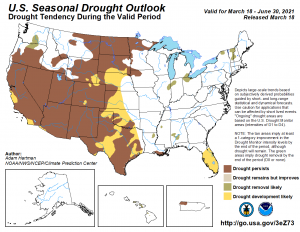 This map depicts where there is a greater than 50% chance of drought persistence, development, or improvement based on short- and long-range statistical and dynamical forecasts during March 18 through June 30, 2021. (NOAA NWS CPC)

Warmer-than-average temperatures this spring and low soil moisture will allow drought conditions to develop and expand in the southern and central Great Plains as well as southern Florida. In the northern Plains, existing drought could intensify if subnormal spring precipitation occurs. Drought improvement during the next few months is likely in the Pacific Northwest, Midwest, New England and Hawaii. In drought-affected areas, rangeland, pastures, and winter wheat have already experienced adverse effects, which were exacerbated by the severe February cold outbreak. 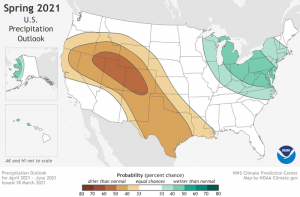 U.S. precipitation outlook for spring 2021 (April-June). Places where the forecast favors a much wetter than average spring are colored green, and places where the forecast favors a much drier than average spring are brown. Much wetter or much drier means “in the upper or lower third of the recent climate record (1981-2010).” The darker the color, the stronger the chance of that outcome (not the bigger the departure from average). White means the chances of a wet spring, dry spring, or near-average spring are all equal. NOAA Climate.gov map, based on forecast data from NOAA CPC. 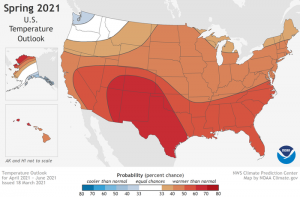 Places in the U.S. where the spring (April-June) temperatures are favored to be much warmer than the 1981-2010 average (reds) or much cooler than average (blues). White areas mean the chances for above-average, near-average, or below average are all equal. The darker the color, the stronger the chance of that outcome (not the bigger the departure from average). NOAA Climate.gov map, based on forecast data from NOAA CPC. 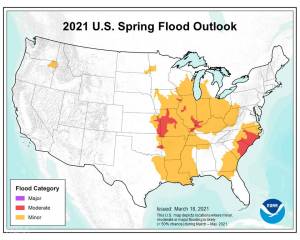 This map depicts the locations where there is a greater than 50% chance of moderate or minor flooding during March through May 2021. (NOAA)

Heavy rain in late February into mid-March has led to flooding and elevated stream flows across portions of the Midwest. Significant rainfall events could trigger flood conditions on top of already saturated soils.

A reduced flood risk exists for the majority of the Greater Mississippi River Basin, Red River of the North, and Souris Basins, primarily due to abnormally dry conditions, ongoing drought, and a lack of snowpack and associated water equivalent. However, the Coastal Plain of the Carolinas, as well as the Lower Missouri and Lower Ohio River basins, which are currently experiencing flooding, have an elevated risk of minor to moderate flooding, according to the NOAA forecast.

Water supply forecasts through spring are predicted to be below to much-below normal for most of the desert southwest, southern Oregon, and southern Idaho into much of the Rocky Mountains, which will play a major role in drought persistence this spring.

“Our national hydrologic assessment helps to inform the Nation where there will likely be too much or too little water. This spring, we anticipate a reduced risk for flooding, and forecast significantly below average water supply where impacts due to low flow contribute to the continued drought,” said Ed Clark, director of NOAA’s National Water Center in Tuscaloosa, Alabama.

(NOAA’s 2021 Spring Outlook highlights video produced by the Climate.gov team in cooperation with the NWS National Water Center and the Climate Prediction Center. Unless stated otherwise, Climate.gov video productions can be freely republished or re-purposed by others. Find this video and more at www.climate.gov/Spring2021)