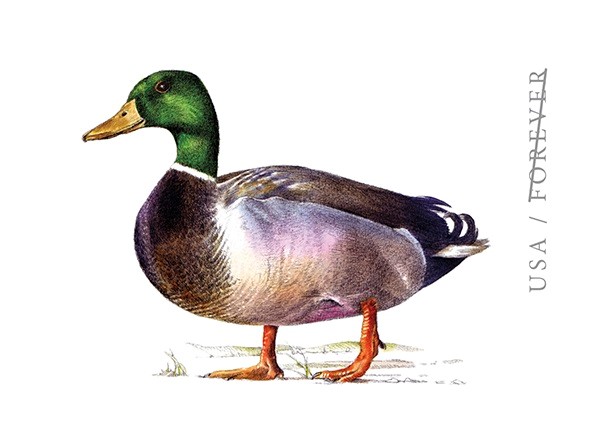 A mallard duck is featured on the newest U.S. Postal Service stamped card, available today. The card features a drake in his breeding plumage.

The stamp art shows the mallard (Anas platyrhynchos) in pre-existing artwork by famed illustrator and designer Dugald Stermer. He drew this realistic full-body, left-facing profile in pencil, coloring it with a watercolor wash.

The card is being issued as a Forever stamped card. Its postage will always be equal to the value of the stamped postcard rate in effect at the time of use, even if the price increases after purchase.

One of the world’s most recognizable birds, the mallard ranges widely throughout the Northern Hemisphere. Millions spend their summers in the Great Plains, and each year as the weather cools, millions more migrate into the contiguous states from Alaska and Canada.

A drake competes with other males for the mating privileges of a mallard hen. To impress her, he makes a show of his breeding finery: iridescent green head, white neck ring, chestnut breast and curled black tail feathers. Although the drake is generally flashier, wings of both drakes and hens have bands of blue surrounded by narrower stripes of black and white, markings also useful in courtship displays.

While the hen is busy tending her nest and eggs, the drake departs and joins other drakes at a marsh. No longer needing breeding plumage in the summer and early autumn, they molt and don mottled brown feathers, much like those of the hens. This camouflage plumage protects drakes from predators during the three or four weeks they are unable to fly because they are growing new wing feathers.

Mallards are dabbling ducks; they tip, tail-up, in shallow water to feed mostly on vegetation, but also on insects and small crustaceans beneath the surface. The ducklings can feed themselves soon after hatching. On land, mallards often feed on grain left in farm fields. The average adult mallard weighs almost 3 pounds.

The distinctive, loud, raspy quack commonly associated with ducks is actually the call of the mallard hen. The drake’s call is lower and softer. Many other wild ducks have calls that sound nothing like the classic quack. Except for the Muscovy duck, all domestic ducks are descended from the wild mallard.

Dugald Stermer revolutionized the look of publications with his work for Ramparts magazine in the 1960s. His style influenced the design and typography of Rolling Stone, New York and Mother Jones magazines, and he was sought after to illustrate covers and articles for many other publications. Stermer designed the medals for the 1984 Los Angeles Olympic Games and headed the illustrations department at the California College of the Arts. His illustrations of the natural world, rendered in the precise yet casual modern style he popularized, are collected in several books.