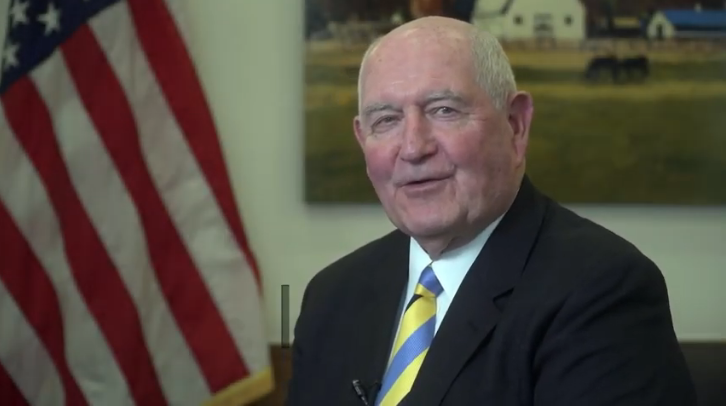 This week, Agriculture Secretary Sonny Perdue kicked off the 10th annual Feds Feed Families Campaign at the U.S. Department of Agriculture (USDA) headquarters in Washington D.C. The food drive is an annual event in which federal employees around the country collect food for distribution by food banks, food pantries, and shelters.

Secretary Perdue was joined off by the Managing Director, Tax, Public Policy, and Government Relations at Feeding America, Geoff Plague, and the Founder and Executive Director of Ample Harvest, Gary Oppenheimer. They teamed up to tout the importance of the campaign and how together all federal employees can make a difference to those less fortunate.

With this being the 10th anniversary of Feds Feed Families, USDA has decided to run the campaign differently. Instead of reporting out the pounds of food donated by agency or department, USDA will report out one metric across the federal government every Friday. Federal employees will no longer focus on competing with one another for the most pounds of food collected, and instead focus on our mission of coming together to help those in most need. We believe with this refocus we can truly make a difference.

As in prior years, donations made in the Washington D.C. metropolitan area go to food banks in the District of Columbia, Maryland and Virginia through a partnership with the Capital Area Food Bank. Other donations go to food banks across the country – having a positive impact to help food banks address food insecurity.

This year, the food drive will run through August 9 with federal employees collecting nutritious foods, both canned and fresh when possible. A closing ceremony will be hosted on August 16.

Since 2009, federal employees have raised over 88 million pounds of food for Feds Feed Families. USDA hopes to bring that total up to 100 million this year. USDA encourages all federal agencies to participate in 2 can Tuesdays each Tuesday of the campaign.

This is a press release from USDA.