In 1973, prison officials took Lester Eubanks to a shopping center in Columbus, Ohio, and allowed him to shop unescorted as a reward for good behavior. 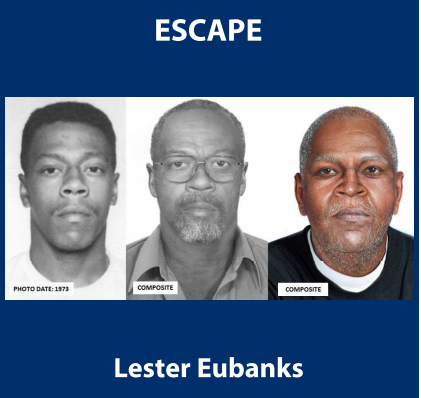 More than 45 years ago, one of the most notorious prisoner escapes in Ohio history occurred.

A convicted child murderer, serving a life sentence, walked away from his handlers and justice. On December 7, 1973, prison officials took Lester Eubanks to a shopping center in Columbus, Ohio, and allowed him to shop unescorted as a reward for good behavior. When Eubanks failed to return to his scheduled pick up location, he was reported as an escapee, and has eluded authorities ever since.

The National Center for Missing and Exploited Children (NCMEC) has employed its Forensic Imaging Unit to construct a new age-enhanced photo of 15 Most Wanted Fugitive Lester Eubanks to help apprehend Eubanks.

“The technology and the talent of the artists has created a likeness that will hopefully bridge the gap in time that will enable a Facebook user or an Instagram follower to identify this child killer,” said U.S. Marshal for Northern Ohio Peter Elliott. “This pencil-to-paper approach helps humanize a photograph that takes him from escapee to old-man.”

Given the difficult task of identifying a fugitive who has been on the run for over 45 years, like Eubanks, this digitally enhanced image allows investigators to present a new likeness that can better identify how he may have aged.

On Nov. 14, 1965, Eubanks shot and bludgeoned to death Mary Ellen Deener in what law enforcement alleged was an attempted rape. Authorities quickly identified Eubanks as the offender. He was arrested the next day and charged with first-degree murder while perpetrating rape. On May 25, 1966, a jury found Eubanks guilty of the crimes and sentenced him to death. In 1972, Eubanks’ death sentence was commuted to life in prison without the possibility of parole.

“I think about this case every day and the little girl who was killed,” said Deputy U.S. Marshal David Siler, who has worked the case since January 2016 when it was adopted by the Northern Ohio Violent Fugitive Task Force cold case unit. “In law enforcement, there are cases that keep you up at night; this is one of those cases.”

Eubanks, 75, is a 5-foot-11 black male with black hair and brown eyes. At the time of his disappearance, he weighed approximately 175 pounds. Other unique physical characteristics include a mole under his left eye and a scar on his right arm. He may be using the alias Victor Young to hide his true identity.

Anyone with information concerning any wanted fugitive can contact the Northern Ohio Violent Fugitive Task Force at 1-866-4WANTED (1-866-492-6833). You may also anonymously text in a tip by texting the keyword “WANTED” and your tip to TIP411 (847411), or you can send a web tip at the following webpage http://www.usmarshals.gov/district/oh-n/index.html. Reward money is available and tipsters may remain anonymous.