EXCLUSIVE: Police find no malice in Montravious’ injury but question his trip home in a school bus 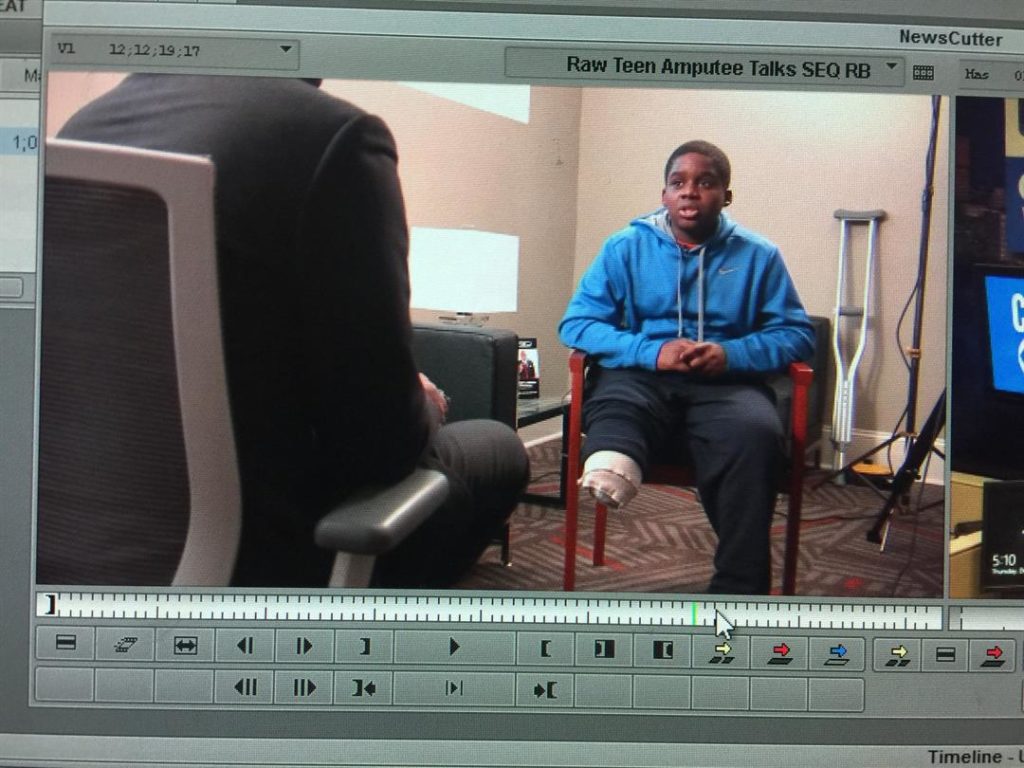 In a private internal memo obtained last week by All On Georgia, Columbus police Lt. Consuelo Askew explains why she did not push for charges against contract Behavior Specialist Bryant Mosley who 19 months ago body-slammed a troubled middle school student five times in a Muscogee County classroom — an incident that led to the amputation of the young person’s right leg.

Concurring with the opinions of three local educators involved in the Sept. 12, 2016 incident at the Edgewood Student Service Center, the police report states repeatedly that, “Mosley never intentionally tried to cause physical bodily harm” to Montravious Thomas — then a 13-year-old eighth grader, in his first day of class at the alternative school.

Askew’s report also deals with an unnamed school official’s extraordinary decision not to call an ambulance after Montravious was badly hurt in an altercation with Mosley, a former college football lineman. Instead — as several observers have described — the damaged student was carried to a school bus “like a sack of potatoes.”

In a meeting on March 17 of this year the officer summarized her lengthy investigation of the case in a three-page police report. Askew first delivered her conclusions in a meeting with District Attorney Julia Slater and ADAs Don Kelly and George Lipscomb.

After listening to her findings and viewing footage of classroom surveillance videos, the prosecutors agreed with the police lieutenant, who regularly serves as a part-time School Resource Officer at Edgewood. Askew was on duty at the school on the day of the altercation.

The case was officially closed on April 2, according to Askew’s report that was filed one day after the meeting. However, decisions in the 19-month-old case were not immediately announced to the public and were not relayed to the Thomas family or their attorneys.

Following Askew’s narrative, Montravious routinely arrived at the Edgewood Student Services Center riding in a traditional Blue Bird school bus around noon on a warm Monday in the fall of 2016. The student had been reassigned to that facility after being involved in bullying incidents at East Columbus Magnet Academy — his home school.

According to the report, at Edgewood he joined Mosley in Room 109, where an out-of-control Montravious quickly started acting out, refusing to do class assignments, using profanity, walking around the classroom and trying to jump out of outside windows.

“Mosley tried to de-escalate Montravious’ behavior by telling him to calm down and relax,” Askew wrote. When those measures failed, Mosley got physical. She confirmed that the student was forcefully restrained five separate times and that he twice grabbed the metal handle of a dustpan trying to hit the behavior specialist.

“ … trying to prevent Montravious from swinging the rod and telling him to drop it, they both went to the floor and after hitting the floor or the rod Montravious sustained a right leg injury and video evidence support(s) this account,” according to the police report.

Special Education teacher Zehra Malone, paraprofessional Phyllis Fox and Mosley were among the staff and faculty members at Edgewood interviewed by Askew. It was Malone who examined the student’s damaged leg, which untrained teachers believed wasn’t badly injured.

“He was walking ‘some,’ (and) moving his leg up and down,” the police report says.

Askew says Malone did not see any blood, swelling or bruising, but what they didn’t know, according to the report, was that Montravious had sustained a Tibia Plateau (Vascular) Fracture (Salter Harris III) in his right leg.

At the school, the injured student received token medical treatment (an ice pack and a warm towel) and school officials — believing he wasn’t hurt seriously — did not call for an ambulance or seek outside medical input.

After the final bell sounded that afternoon, Mosley physically carried the injured student down a hallway at Edgewood, loaded him on a waiting MCSD school bus and sent him home even though staff members were unable to reach his mother, Lawanda Thomas, by telephone.

This screen shot from a controversial surveillance video showing Montravious Thomas being carried up a hallway by private contractor Bryant Mosley with Special Education teacher Zehra Malone leading the way was first shown on this site. The video was later used by print and broadcast outlets all over the world as the youth’s story spread to all sides of the globe.

The youth was taken to a local hospital and later that night, concerned emergency room physicians in Columbus arranged for Montravious to be airlifted to an out-of-town hospital. Over the next few weeks doctors in Atlanta, fearing a loss of circulation, tried vainly to save his leg.

Finally, on Oct. 18, 2016 — in a delicate four-hour operation — specialists at the Egleston Children’s Hospital at Emory University were forced to take Montravious Thomas’ injured right leg just below the knee.

In her report, Askew wrote this:

“We agreed that they made a bad and costly decision by not calling for an ambulance, however there is no evidence that Mosley, Fox or Malone intentionally, maliciously or willfully deprived Montravious Thomas of medical treatment there no charges will be filed.”

Her report added this caveat:

“In hindsight, an ambulance should have been called however, at the time according to the staff believed what they were doing was appropriate, not realizing the severity of Montravious’ injury.”

The report cites Askew’s conclusion that charges should not be filed against Mosley, Malone or Fox because their decisions not to call 911 were not “willful or malicious.” It also indicates that the district attorney’s office and the Columbus Police Department Special Victim’s Unit concur with the officer’s other findings.

The report says questions pertaining to policies and procedures before, during and after Sept 12, 2016 regarding the actions of Mosley, Malone, Fox and Eddie Powell (then the assistant principal at Edgewood) would have to be answered by the Muscogee County School District.

Powell was recently named assistant principal at Midland Middle School. He has an active employment lawsuit in U.S. District Court in Columbus against the MCSD claiming harassment and discrimination after it was revealed that he had been a “whistleblower” in the Thomas case. He was the source behind the infamous video.

Attorneys Renee Tucker and Forest B. Johnson Jr. represent Montravious Thomas and his family in their $25 million lawsuit against the Muscogee County School District.

Acting on behalf of the student and his family, the law firm of Forest B. Johnson and Associates filed a $25 million law suit in state court against the school district and several of its representatives — including Superintendent David Lewis.

The case is assigned to Judge Ben Richardson, a former Solicitor General in Muscogee County and a member of the state court bench since 2014.

Lawyers are restructuring details of the high-priced suit.

Five MCSD employees are being dropped as professional defendants, but will be re-added in their individual capacities. That includes Mosley, the behavior specialist who originally worked for Mentoring and Behavioral Services, a clinic that operates in Columbus, Atlanta, Phenix City and Montgomery.

Last week, in a news conference held at his firm’s local office, Johnson asked Columbus Police Chief Ricky Boren to assign another investigator to the case, promising that a new person would be allowed to interview the teenager. Because of her job at Edgewood, Johnson and Tucker claim Askew has a clear conflict of interest.

With the case being officially over, that issue could be moot.

Referencing the video first made public by All On Georgia that shows Montravious being physically carried to a school bus, Johnson said Lt. Askew is clearly visible in the corner of one of the final frames. That video was posted soon after a MCSD spokesperson issued a statement saying the injured student was walking around after the altercation in the classroom.

Johnson and associate Renee Tucker say Askew will soon be reclassified as a witness in the lawsuit, which they say they are still actively pursuing. Attorneys claim important depositions will be taken this month from Montravious, his mother and others connected to the case.

Johnson also attacked a recent TV news report by Robbie Watson of WLTZ in Columbus that claimed Montravious Thomas wasn’t injured in the classroom incident and that that his injury actually occurred during an automobile accident — a rumor that began circulating around Columbus soon after the student’s school day confrontation with Mosley.

“(Montravious) was not injured in a car wreck,” attorney forest B. Johnson says.

The attorney maintains that another member of the Thomas family was involved in a wreck around that same time. Johnson says his client walked into Edgewood that morning and had to be carried out in the afternoon — as indicated on the surveillance video.

Johnson says his law firm — with offices in Columbus, Macon and Atlanta — has been told that surveillance video of Montravious’ bus ride to his new school and his trip back home do not exist. “If they do exist, don’t you think they would have produced them by now?”

Outspoken Muscogee County School Board members John Thomas and Frank Myers sat down for a lengthy video interview with newsman Richard Hyatt of All On Georgia/Muscogee last year in a hard-hitting segment called “The Truth About Montravious Thomas.”

Askew defends the content of her written report saying it was the best she could do without being able to interview either Montravious or his doctors. She maintains that his attorneys have refused to have him interviewed by the police or by representatives of the Child Advocacy Center (Children’s Treehouse).

According to Tucker, she has emails from Askew that claims the Columbus Police Department had already obtained Montravious’ medical records through a subpoena. Asked by Tucker to produce the medical records, the officer never responded.

In a separate conversation, the attorney says the police lieutenant never asked for anyone other than herself to interview the injured youth or talk with his physicians. According to Tucker, that includes anyone from Children’s Treehouse.

That agency services children in the area who have been victims of abuse and exploitation and young people who have been impacted by violent crimes — either as a victim or a witness.

Montravious Thomas has reportedly had troubles with the law since the loss of his right leg, something Tucker neither confirms nor denies. Johnson is honest about his troubled client, acknowledging that he is not a perfect child, but one who did not deserve to lose his leg.

Now 15, Montravious attends school in a system outside of Muscogee County.

“We’re here today because (Muscogee County) didn’t get him help,” Tucker says. “ … Then they lied and said there was no video,and that (Montravious) wanted to ride on Mr. Mosley’s back. This is unfair to the public. The public needs to know the truth.”

And, she added, “This case is not going away.”