A Georgia state representative is battling with a local municipality in his district over the enforcement of a sign ordinance the representative says is unconstitutional.

A Georgia state representative is battling with a local municipality in his district over the enforcement of a sign ordinance that the representative says is unconstitutional.

Minority Leader Bob Trammell says the City of Luthersville in Meriwether County is trying to force his mother to remove a political yard sign from her property, which Trammell said prompted him to place a sign on his own property to make a point.

The crux of the issue is that the City of Luthersville ordinance does not allow political signs for more than 10 days following an election, among other restrictions. While the primary election was on June 9th, the General Election is not until November. From the ordinance as published on Municode:

The problematic component for the City of Luthersville, however, is that the U.S. Supreme Court has long held that political yard signs are free speech and cannot be limited by municipalities.

In 1994, SCOTUS ruled that the display of political and other types of signs on residential property is a unique, important, and protected means of communication and towns cannot restrict the display of such signs. The Court upheld lower court rulings declaring an ordinance that bans residential signs an unconstitutional restriction on the freedom of speech (City of Ladue, et al. v. Margaret P. Gilleo, 114 S.Ct. 2038) and specifically found that the town’s interest in regulating signs or eliminating clutter does not outweigh its residents’ right to free speech. Also of importance, the Court recognized the special place that individual liberty in the home holds in our culture and our law.

The Court revisited the issue in 2015 and held the same in Reed et. al v. Town of Gilbert, AZ et al – political signs are protected speech, particularly on private property.

Trammell made a post on social media about the city’s request for removal last week before taking legal action. 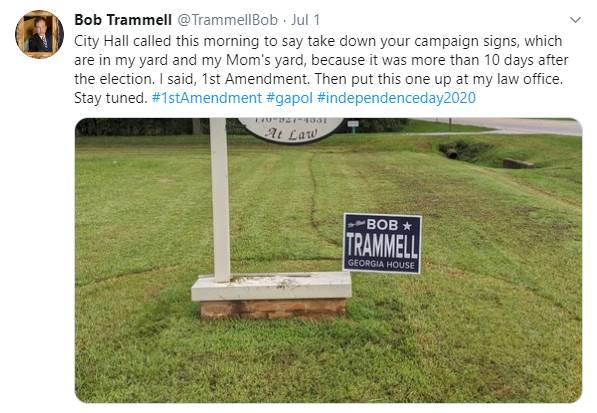 His tweet garnered the attention of citizens and fellow state representatives alike. 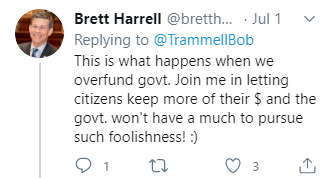 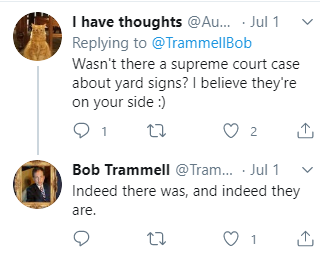 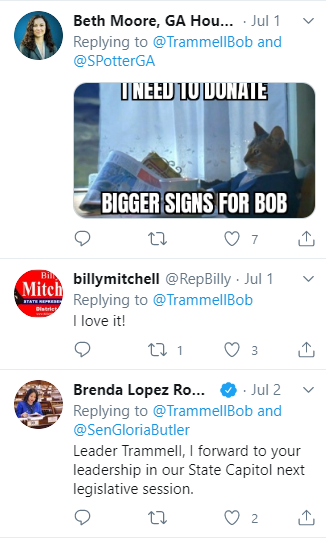 Represented by Sarah Brewerton-Palmer, Trammell and his mother sent a letter to the City

of Luthersville demanding that the City immediately suspend enforcement of its sign ordinance, which restricts the placement of political signs on private property, and begin the process of either rescinding the ordinance or amending it to comply with the United States and Georgia Constitutions.

“Attempting to enforce this unconstitutional sign ordinance is the government telling us to shut up and be quiet” Trammell said in a news release about the dispute. “That’s not how the first amendment works. I’ve spent my professional and legislative career fighting for the rights of Georgians. You better believe I’ll fight for the Bill of Rights in my own backyard.  The notion that government can come on your private property to take down a political yard sign is beyond ridiculous and shows a complete lack of understanding of the 1st Amendment to the United States Constitution and an utter disregard for private property rights.”

Both because the City’s stated interests are not compelling and because the ordinance is not narrowly tailored to meet those interests, Luthersville’s sign ordinance violates the First Amendment.  This violation is one that the City should take very seriously, as it chills political speech on both sides of the aisle, Democrat and Republican.  The First Amendment guarantees that citizens have the right to speak freely, particularly in matters of politics.  The City cannot abridge its residents’ free speech and must instead immediately cease enforcing its sign ordinance and either repeal it or replace it with an ordinance that complies with the First Amendment.

The letter asks that the City agree in writing by July 10 to immediately cease enforcement of its ordinance and either to repeal the ordinance or swiftly amend it to comply with the United States and Georgia Constitutions.

The Georgia Municipal Association lists Theodore Meeker as the City Attorney. He could not be reached for comment Monday.

Brewerton-Palmer’s full letter is below.