The Vanderbilt Commodores picked up where they left off last spring at the SEC Men’s Golf Championship taking place this week at the Sea Island Golf Club. 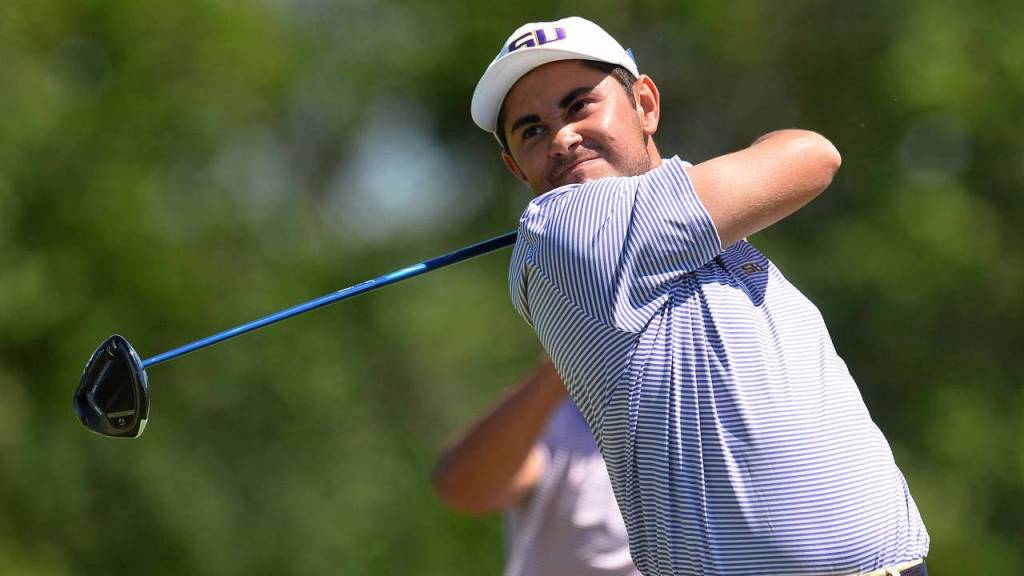 ST. SIMONS ISLAND – The Vanderbilt Commodores picked up where they left off last spring at the SEC Men’s Golf Championship taking place this week at the Sea Island Golf Club.

The second-ranked Commodores surged to the top of the leaderboard in the opening round of the tournament Wedneday afternoon, shooting a 4-under-par 276 with a strong back nine on the Seaside Course which is the annual home for the SEC tournament.

Vanderbilt won its first-ever SEC title here last season, topping Texas A&M in the match-play finals. The Commodores were the top seed for match play after also winning the stroke-play portion of the tournament last year.

The tournament includes three rounds of stroke play with the top eight teams advancing to match play to decide the tournament champion.

This week’s tournament features eight teams ranked in the Top 25 poll and 13 of the league’s 14 teams are rated inside the top 50.

The Commodores hold a four-shot lead over No. 7 Auburn and an unranked Tennessee team after the first 18 holes. The Tigers and Volunteers both shot even-par 280 on Wednesday.

Vandy played the back nine holes in 4-under as a team in the first round which was greeted by stiff winds and firm greens – both trademarks of the Seaside Course which is also home to the PGA Tour’s RSM Classic. The course is a par-70 and is playing 6,898 yards this week.

Vanderbilt was the only team to finish the back nine in red figures in the first round.

“We knew it was going to be a long day and one not like we have had before with the practice round and first round in same day,” said Vandy coach Scott Limbaugh.“My challenge to the guys was simply to have a good attitude about it going in and they did that this morning and it helped, in my opinion, this afternoon.”

Three Commodores are in the top 10 of the individual standings. Theo Humphrey and Will Gordon both shot 2-under 68 and are tied for third. Also, John Augenstein is tied for eighth after posting a 1-under 69.

The tournament leader after 18 holes is LSU’s Luis Gagne who fired a 66 to start his tournament. The junior for the Tigers carded birdies on four of his first seven holes and finished with six birdies and two bogeys on the day.

The individual champion will be crowned after the 54 holes of stroke play.

Georgia, which has won six times in the previous 17 tournaments at Seaside, finds itself in 11th place after the first round. The Bulldogs shot an 11-over 291 over the opening 18, but they are just three shots behind the two teams tied for eighth place.

“It was not the start we envisioned, but there’s a lot of golf left to play,” Haack said. “With this format, we’re right in the thick of things as far as being in the top eight. We know what we need to do the next couple of days. Our confidence has not dropped at all. We have the ability to climb up the leaderboard starting on Thursday.”

The Bulldogs were led Wednesday by freshman Davis Thompson who shot 1-over 71, putting him in 18th place but just five shots behind the tourney leader.

The surprise on Wednesday was the disappointing play by third-ranked Texas A&M and 11th-ranked Florida. The Gators shot 13-over 293 and are 12th overall while the Aggies settled for a 16-over 296 total and are last in the field after the first 18.

“Obviously, a very disappointing day,”said Aggies coach J.T. Higgins, who has led the team to back-to-back runner-up finishes in the conference tourney the last two seasons. “This is not the time you want to have your worst round of the season, during the SEC Championship. However, it is just one round and there is still a lot of golf to play. Our goal is still the same, to be playing on Saturday, which means we’ve got to find a way to move up the leaderboard and into the top eight.”

The second round begins at 7:30 a.m. Thursday. For complete results and tee times, click here.