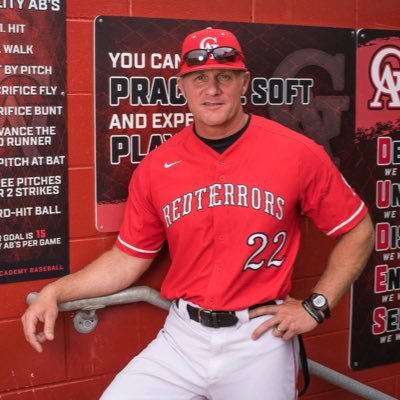 Trent Mongero and Brian Crawford have guided the Glynn Academy and Brunswick High baseball teams into the state playoffs.

Now, we’ll see if the Red Terrors and Pirates can advance by knocking off tough opponents in the opening round of the Class AAAAAA state tournament which opens on Thursday.

First pitch is scheduled for 4 p.m. at Wainwright Field. Game 2 will follow 30 minutes after completion of the opening game. A third game, if necessary, will be played at 2 p.m. Friday.

The Pirates (17-13) will be on the road in the opening round as the No. 3 seed from Region 2. They will play at Houston County (23-7), the No. 2 seed from Region 1. That series also opens tomorrow afternoon in Warner Robins with a third game scheduled for Friday if needed.

Both the Terrors and Pirates are raring to go, according to their coaches.

“The state playoffs are a new season, a new opportunity,” said Mongero who took North Hall to a state title a year ago. “The goal is to get in the playoffs, stay hot and play for awhile. The guys seem even keel and are ready to play.”

Said Crawford: “Brunswick High is excited for the opportunity to compete in the state playoffs this year. We have accepted our No. 3 seed and look forward to the challenges Houston County brings come Thursday. We were fortunate to hold onto the three seed this year, and that is a step forward for us.”

After winning the region championship last season, the Terrors settled for the second spot this year after going 8-4 in region games and finishing two games behind league champion Effingham in the standings. The Terrors lost two of three games against the Rebels, and the series with them was the only one Glynn didn’t win in the region.

They are happy however, to start the playoffs on their home field which will hold a playoff series for the first time after opening just this season.

“It always great to sleep in your own bed, go to school and play at home in front of our fans,” Mongero said. “That’s our normal home-game routine. Routines breed comfort, comfort breeds confidence and confident players play better.”

The Terrors are always confident when senior pitcher Will Bowdoin is on the mound. Bowdoin, a Mercer signee, was named the Region 2 Pitcher of the Year just this week after going 9-1 in the regular season with an .835 ERA.

Mongero would not disclose his pitching rotation for this week’s series, but Bowdoin will surely see the hill in one of the two games on Thursday.

The Terrors will also likely pitch Paul Hegeman who made the all-region team as a pitcher. Bo Pierce, an all-region catcher, has also started games for Glynn late in the season.

The Glynn offense is led by senior Randon Jernigan and Bowdoin who usually hits second in the order. Jernigan, an all-region center fielder and University of Georgia signee, leads the team with a .474 average while Bowdoin is hitting .393.

The Terrors also have some big bats in the middle of their order including that of Hegeman and Griffin Bates who made the all-region team as a utility player.

Valdosta won’t be an easy out for the Terrors. The Wildcats were 7-5 in their region, but did take a game last week from league champion and last year’s state-runnerup Lee County.

In their 7-2 win over the Trojans in the final game of the three-game set, the Wildcats got three extra-base hits from junior Colby Thomas and a two-run home run by Avery Thomas who has eight round-trippers for the season.

Eric Posas got the pitching win as he threw five innings and kept the Trojans off the scoreboard after giving up two runs in the first.

Freshman pitcher Cooper Samples, who has impressed head coach Brad Porter while working primarily in relief, finished out the game for Valdosta. He entered the game in the sixth with the bases loaded and no outs and proceeded to retire three straight batters including the last two on called strikes.

The Wildcats lost the first two games against Lee by 2-1 and 3-1 scores.

Stephens started Game 1 of the series for Valdosta and was a tough-luck loser. Jude Ard started the second game and gave up just three hits in seven innings but also absorbed a tough loss.

“Valdosta has strong pitching, plays fundamental baseball and swings it through their lineup and are well-coached,” Mongero said. “As would be expected in the playoffs, it’s important that we play to our strengths, compete our rear-ends off and stay hot.”

The winner will face the winner of the Lakeside-Tucker winner next week in the Sweet 16.

Google – First-year Brunswick coach Brian Crawford takes the Pirates through batting practice this season. BHS is set to play in the state tournament.

Brunswick will be looking to end a five-game losing slide when it takes on Houston County.

The Pirates plan to start senior right-hander Harrison Trawick in the first game. Trawick, who was named the Region 2 Player of the Year this week, owns a 5-3 record and a .930 ERA.

Hunter Goff will start the second game. Crawford did not name a Game 3 starter should the series go the distance.

Brunswick was 6-6 in the region this season. It opened the region schedule with two wins in three tries against Richmond Hill, which is the league’s fourth playoff team. The Pirates then won one game in its three-game set with Glynn before sweeping Bradwell Institute and losing all three games to close the season against Effingham.

The Pirates had a chance to win all three games against the Rebels as they fell 3-2, 6-3 after leading early and 5-4 with the winning run scoring on a wild pitch.

“The ending result was discouraging,” Crawford said. “Knowing the potential of our team and not playing at the level that was demanded was discouraging. We competed for one game in three games against Glynn, but competed in all three against Effingham and just couldn’t close the door.”

Crawford hopes his Pirates can break through against the Bears who won state titles in 2014 and 2016. The 2014 championship team included Jake Fromm, the current starting quarterback for the Georgia Bulldogs.

The Bears were 9-3 in league play this year, losing once to Valdosta and twice to Lee County including a 4-3 defeat in 10 innings.

Seniors Cam Jones and RJ Preston are among the top players for Houston County.

Crawford has actually seen the Bears in person this season. They came to Brunswick to play in the Baseball at the Beach tournament and won all four games while here.

“Houston County is an experienced team in the state playoffs and their focus will be pitching and defense as will ours,” the coach noted. “I think they are comparable to what we have talent-wise, but they are deeper on the bench given our youth.

“Offensively, they will give us an opportunity and we have to answer when it presents itself.”

Trawick wasn’t the only Pirate to make the all-region team. Goff, who is batting

.353 as a sophomore, made the team as a third baseman. Joe Smith, who is hitting

Crawford said the Pirates understand they are underdogs against the Bears which he says puts the pressure on the home team.

“We have all to gain and nothing to lose in this series,” he said. “We strive to put Brunswick High on the map when it comes to competitive baseball in the state of Georgia.”

The winner will face the Drew-Heritage winner in next week’s second round.