Teams must win to advance to state quarterfinals 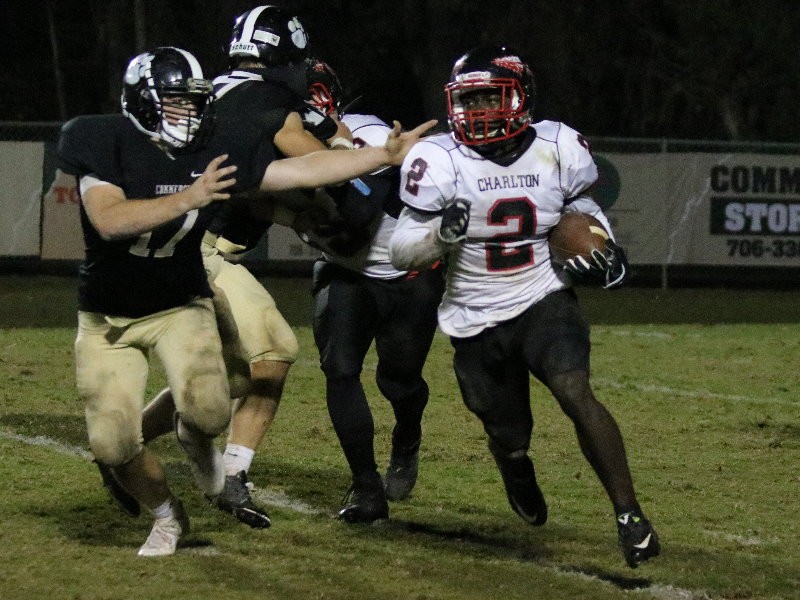 The Georgia High School Association state football playoffs move into round two this week, and several teams from Southeast Georgia will be in action.

The following is a look at the games involving teams from the Southeast region of the state that AllOnGeorgia has covered regularly during the 2018 season.

The Tigers got their first postseason win since the 2008 season when they won at Grovetown last week in the first round.

This week, Bradwell gets a team that usually gets multiple playoff wins each year in Northside.

The Eagles advanced to the second round with a victory at Tucker last week in a opening-round clash between state heavyweights.

Northside (6-5) finished third in Region 1 this season behind defending state champion Lee County and Valdosta which clipped the Eagles 46-44 when they played each other.

All five of Northside’s losses were to playoff teams, and all but the loss to Lee County was by eight points or less.

Like Bradwell, the Eagles are a run-first team which averages almost 235 yards per game on the ground.

Senior quarterback Jadin Daniels is their leading rusher with 1,289 yards and 14 touchdowns for the season.

Bradwell (5-6) will counter with senior running back and South Carolina commit Kevin Harris who has gained 1,466 yards this season while also going for 22 touchdowns in 10 games.

Harris ran for 189 yards and two TDS last week on 29 carries in the win over Grovetown.

The winner plays the Sequoyah-Creekside winner next week.

The Wildcats advanced to the second round with a victory last week at Greenbrier.

The Trojans played for the state title last season, losing to Region 1 rival Lee County in the state final. Richmond Hill lost in the first round last year to Lee.

The Yellow Jackets survived a scare last week as they managed a come-from-behind 17-9 victory over upset-minded Jonesboro in the first round in Jesup.

Wayne will be back at home Friday night against Bainbridge which knocked off Jones County last week in the first round.

The Jackets (11-0), who won a second straight Region 2 title this season, lost in round two last fall to Jones County. That game was also at Jayceee Stadium in Jesup.

The Bearcats (6-5) walloped the Greyhounds last week, 40-13. Jones came into that opening-round affair ranked eighth in the state.

The winner faces the Buford-Kell winner next week.

The Gators had no trouble last week with Riverdale in their opening playoff game as they won 35-7 in their home stadium in Waycross.

Freshman quarterback Thomas Castellanos accounted for four touchdowns in the win and was named the Southeast Georgia High School Football Player of the Week this week.

The Demons are led by quarterback Dylan Fromm who has thrown for 3,351 yards and 35 touchdowns.

The winner plays the Clarke Central-East Paulding winner next week.

The Bears will be at home Friday in round two against Jackson.

Pierce (11-0), the top seed from Region 2, will be looking to get to the state quarterfinals for the first time since the 2016 season.

The Bears fell in the second round last season to eventual state runner-up Peach County.

Meantime, Jackson pulled off a 33-6 upset of Monroe to reach the second round.

Jackson (7-4) finished third in Region 4. The league has all four teams in the second round. The other league teams are Peach, Westside-Macon and Pike County.

The Red Devils have not reached the quarterfinals since 2009.

The Panthers will have to knock off one of the state’s top programs to make it to the state quarterfinals a third straight time.

Peach, which lost to Calhoun last year in the state championship game, is 9-2 this season and won the Region 4 title with a perfect 6-0 record.

Peach’s losses this season were to Class 6A title favorite Lee County and Class 4A contender Mary Persons.

Two of the Trojans’ wins came against Class 6A foes Northside-Warner Robins and Houston County.

The Panthers are led by senior standout running back Kris Coleman who has carried for 1,651 yards and 21 touchdowns thus far this season.

The winner faces the Westminster-Greater Atlanta Christian winner in the next round.

The longtime rivals and perennial powers will collide Friday night in Homerville.

The Panthers won the Region 2 contest between the teams on Oct. 26 by a 40-14 final tally in Folkston.

Charlton (8-3) finished third in the region behind Irwin County and Clinch which is ranked No. 2 in the state.

The Indians won 38-0 last week in the opening round against Taylor County.

Clinch had a bye last week.

The all-time series between the Panthers and Indians is tied at 28-28-1 going into their Friday night meeting.

The winner gets the Dooly County-Mt. Zion winner next week.

Glynn and Valdosta to meet again in second-round playoff game
SE Georgia Recap: Pierce County the only team to survive round two
Posting....