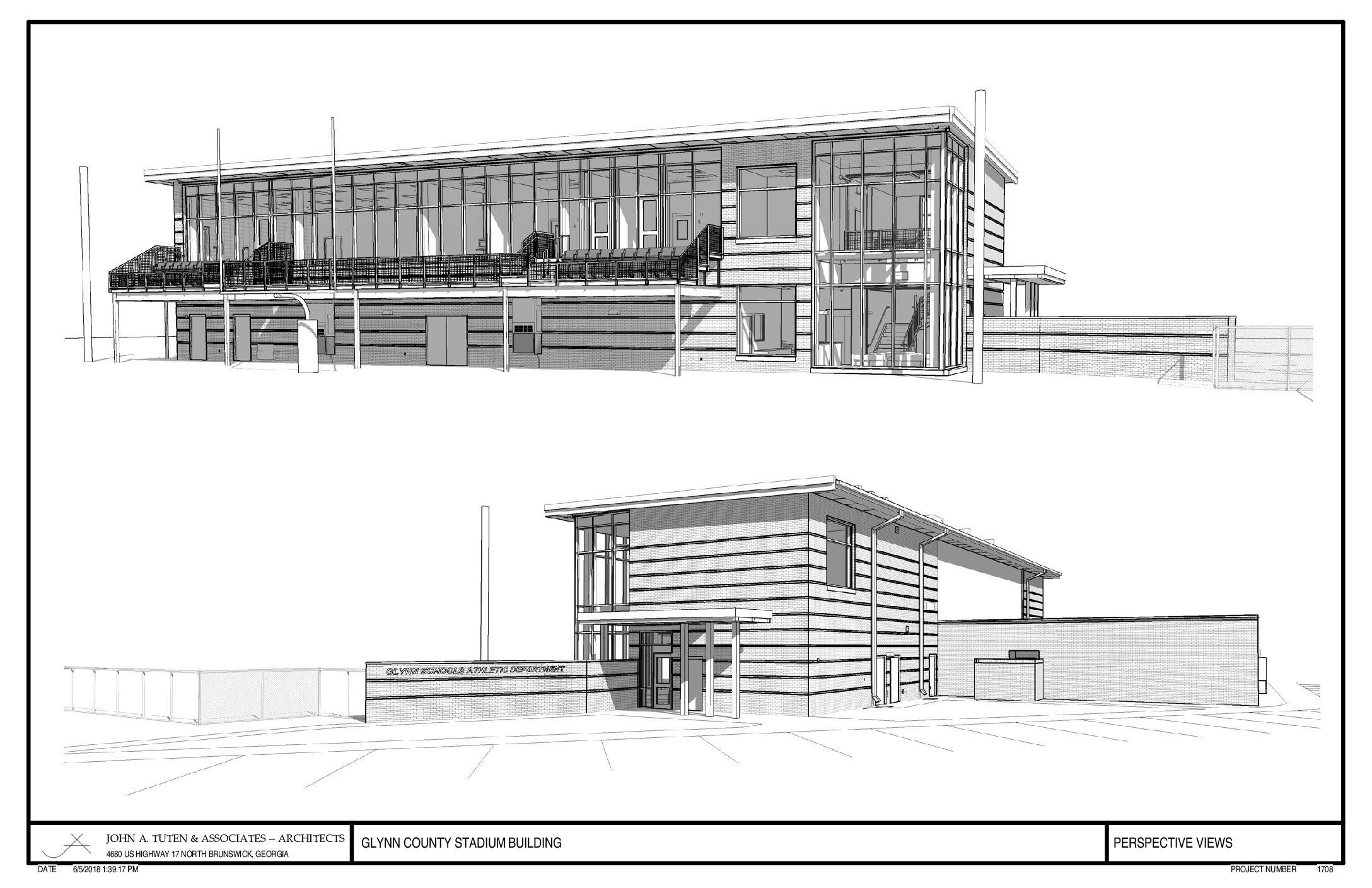 Glynn County Stadium has served its purpose since opening in the 1980s as the home for the Brunswick High Pirates and Glynn Academy Red Terrors.

But this time next year, the football and soccer venue for the Terrors and Pirates will take on a new look which Glynn County Schools officials are hoping will enhance the game-day experience for the teams and fans, but also hopefully make it the true centerpiece for athletics within the county.

“I think that was the original intent for the stadium when it was first built, and hopefully these improvements will help restore that initial vision,” said Steve Waters, athletic director for the school system.

Work on the stadium renovations, which will start in July, is expected to cost $4.7 million and will be paid for using ESPLOST 2 funds.

The renovations include two separate projects – site work largely intended to improve draining around the stadium and also the construction of a new state-of-the-art facility in the South end zone that will house expanded locker rooms, office space, a large meeting room and two suites.

The $2.675 million contract to construct the two-story, multi-use building complex has been awarded to R.H. Tyson, a construction company in Blackshear, while the site work renovations will be done by Poppell-Eller, Inc., for $891,329.

The total cost of the stadium improvements also includes the new video board and lighting that have already been installed.

Waters said all the work is scheduled to be completed next June.

“There are gonna be some inconveniences for our teams this year, not really for the fans, because of construction taking place, but both our schools know it’s a small price to pay right now for future progress,” Waters said.

The existing fieldhouse at the stadium will remain with both the current home and visiting locker rooms combining to become a larger dressing facility for the visiting teams.

The current locker rooms are adequate for soccer, but aren’t really large enough for football teams, according to Waters.

“You can get about 30 or 40 people in there comfortably, but there’s really no way to get much more than that without having issues” he said.

The new home locker rooms, which will be built in front of the existing structure, will be large enough to accommodate some 150 players.

In addition to the team locker rooms, the bottom floor of the new building will include a larger locker room for game officials which will include 14 locker spaces and also private restrooms.

The lower level will also feature a training room and a 600-square foot lobby area.

“Anyone attending any function in the building will enter there,” Waters said.

The upstairs portion of the building will become the new home of the school system athletic offices and will also feature a 2,000-square foot conference room, two suites with outdoor seating for 21 people in each and also a large balcony area overlooking the playing field.

“It’s going to be unbelievably cool,” Waters said. “The biggest thing is the locker rooms and giving our players and coaches what they need. They’ll have more space, and we’ll have big-screen TVs and modern technology for them to use as well.

“That’s the important thing, but it also will help us in several other areas with the conference room, training room and the office space.”

The conference room will have enough seating space for 125 people, and a catering kitchen will be part of that space as well.

“We want to use the conference room for a lot of different things – booster club meetings, media days and things like that. We also want other people such as the recreation department to use it. We want this to be a central place that can be used for everything athletics,” Waters said.

The suites, he said, will become part of the corporate sponsor experience on game days. Community sponsors will be able to entertain their employees and clients while enjoying a game at the same time.

“Those are gonna be really nice, too,” Waters said. “Certainly, our sponsors give us a lot of money and help to keep us running, and those will allow them to come out with their companies and employees and hopefully have a nice night.”

The site work that also will take place will hopefully improve the drainage at the stadium which has long been a problem. Existing ditches will be redone and improved piping will also be put into place to assist with the flow of water away from the stadium.

Both sides of the stadium will be fully concreted underneath the stands to help eliminate the current draining issues inside the stadium.

“This will be an area for our boosters to park and tailgate,” Waters noted. “Our coaches are really excited about that. Boosters are critical on every level of athletics, and our boosters do a lot for us and play a valuable role in what we do. This will hopefully be a way to help them enjoy Friday night even more.

“Hopefully, this will not only help bring more people to games, but will help grow our booster clubs, too. We want Friday nights to be fun from the time you arrive to the time you leave.”

Waters said the enhancements will benefit everyone attending events at the stadium, especially football games.

“It’s kind of updating the stadium to fit modern-day football,” he said. “The game has changed a lot since the stadium was built. A lot of teams dress out 120 players now. You have to have room for the teams, fans and everyone else involved on game day.”