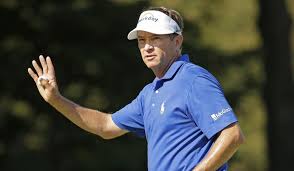 Davis Love III will do something that he’s never done before this week.

Love will make his debut appearance at the U.S. Senior Open set for this Thursday through Sunday at The Broadmoor East Course in Colorado Springs.

The 54-year-old Love finished in a tie for 49th this past week while competing in the American Family Insurance Championship on the Champions Tour. Love posted a 3-under-par score over the three rounds and finished 12 strokes back of tournament winner Scott McCarron who carded a 15-under score to win by a stroke over Jerry Kelly.

When Love submitted his entry papers, he told the media he felt like the Broadmoor was as good a place as any to play in a senior major for the first time.

“Colorado has been a special place for my family,” Love said. “I won two PGA Tour tournaments at Castle Pines and my father captured two junior match-play tournaments on the state level here in the 1950s. Having competed in more than 20 U.S. Opens, I know that I’ll have the same type of challenges at the Senior Open because of the course and the world-class field. I’ll have to use all my skills to pass this ultimate test, but I am ready for it.”

Love had hip replacement surgery in November after hosting the annual RSM Classic at the Sea Island Golf Club. He returned to the golf course in March, and while playing in five events on the PGA Tour, he made the cut in three of the five tournament he played with his best finish being a tie for 58th at the Arnold Palmer Invitational at Bay Hill.

Love missed the cut at the Valspar Championship in his first tournament back and he withdrew from the Wells Fargo Championship in early May after shooting a first-round 78 and having back troubles during the week leading into the tournament.

Love has played only a limited number of events in the senior ranks since becoming eligible on his 50th birthday, choosing to remain mostly on the big tour.

This year, the Hall of Famer has played in two Champions tournaments leading in the Open. In addition to last week’s event, he competed in the Bass Pro Shop Legends of Golf back in late April where he finished tied for 13th at 15-under.

Love is a 21-time winner on the PGA Tour. He won the 1997 PGA Championship for the only major victory of his illustrious career.

Love is scheduled to tee off at 1:12 p.m. on Thursday. He is paired with Vijay Singh and David Toms. The group will play at 7:42 a.m. in the second round on Friday.

“I’m really happy that my first U.S. Senior Open will be at The Broadmoor, one of America’s historic resorts,” Love said.

The Broadmoor is owned by billionaire Philip Anschutz who also has since acquired the Sea Island resort. The formation of the Broadmoor-Sea Island Company, LLC was announced in June 2016.

For more info on the U.S. Senior Open, visit www.usga.org.