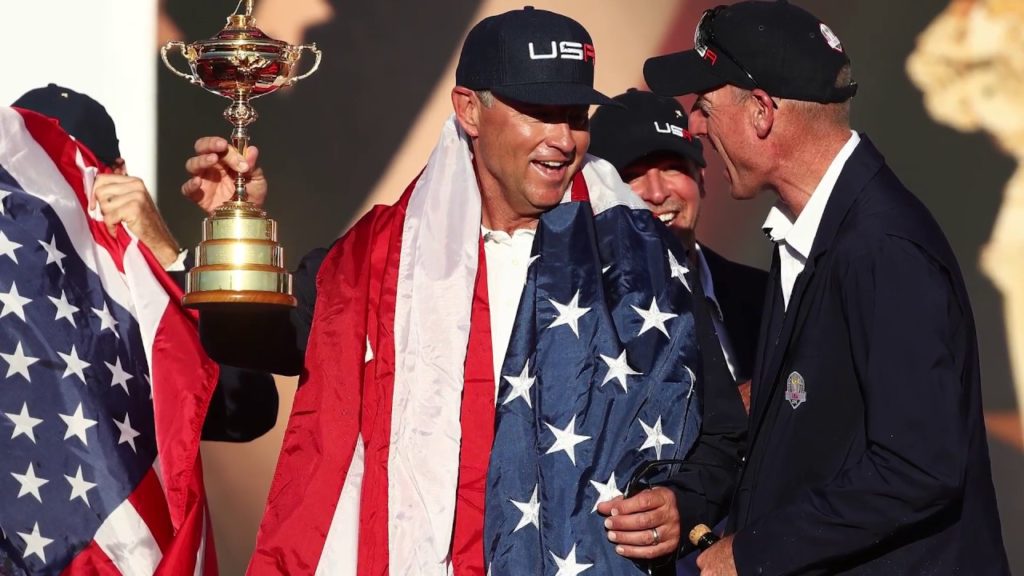 Davis Love III isn’t in the forefront going into this weekend’s Ryder Cup.

Likely, only the most serious golf fans and maybe a handful of people living in the Golden Isles know that he is a vice captain for the United States team that will take on Europe in Paris this Friday through Sunday in one of golf’s greatest events.

But make no mistake. Love is an integral part of this U.S. team as one of its non-playing leaders and has been involved in the reshaping of America’s plan of approach in these matches that had turned into European domination until the U.S. won with Love as its captain back in 2016.

Prior to that American triumph, the Europeans had won eight of the previous 10 Ryder Cup matches with the U.S winning only in 1999 and 2008.

Love was the captain of the 2012 U.S. team that wasted a 10-6 lead going into Sunday’s singles matches when the Europeans won eight of the 12 contests and tied another to pull off what has been tabbed the Mericle at Medinah as the matches that year were played on U.S soil.

Two years later, the Americans lost big to a strong European team, but U.S. captain Tom Watson was highly criticized following the event for his leadership style and decision-making including negative comments by team member Phil Mickelson in the team’s post-match press conference.

Love was among those who gathered around the table for the Ryder Cup Committee meeting after that really low moment for the U.S. and helped develop new strategies that at least in 2016 seemed to work just fine for the Americans on home turf with Love leading a determined and united team as a rare second-time captain.

“People still give us a hard time about the Ryder Cup Committee, but it had a massive benefit to the organization of the team and the players’ relationship with the PGA,” Love said.

“It’s hugely changed. We’re in it to win it year after year. I liken it to the Olympics. They train for it every four years. We’re training for these matches and laying the groundwork for years to come.”

One of the new strategies was to strengthen the team’s leadership by expanding the roles of the vice captains. They aren’t just friends of the team captain who show up the week of the competition and help out however they can while mainly serving as cheerleaders.

Instead, they are truly assistants to the captain and carry out certain roles both on and off the course during the competition but also in the weeks and months leading up to the event.

The responsibilities vary, but the idea is to give the captain a stronger support base, Love says.

“It’s supporting the captain and helping build the team,” Love said. “It’s not just about showing up that week to help out.”

It might be a labor of love for most of the captain’s assistants, but when you accept the role, it’s really like taking on a real job, accoring to Love.

Soon after this year’s U.S. captain, Jim Furyk, was chosen to lead the 2016 American squad, he quickly named Love as his first vice captain.

The Sea Island golfer has been working hand-in-hand with his old Ryder Cup teammate, fellow touring pro and longtime friend on preparing the U.S. side for this week’s competition for most of the current year.

“The role of the vice captains has changed so much since 2014,” Love said. “We made it more of a defined role that isn’t just show up at the Ryder Cup and help out. It’s a year-round job. You’re helping the captain with specific duties that each can handle so the captain can focus on what he needs to focus on. The job gets bigger and bigger. It’s dividing responsibilities and working toward the same goal.”

Love is certainly well-versed in the Ryder Cup, and perhaps more specifically what works and what doesn’t for the U.S. team.

He was a player on six U.S. teams going back to 1993, when as a rookie he helped the Americans to victory on foreign soil which still happens to be the team’s last win in Europe.

He served as a vice captain under Corey Pavin in 2010 before taking on the captain’s role in 2012.

Of course, he was the captain of the victorious U.S. team in 2016 and is now back as an assistant to Furyk this year as the Americans look to win the Cup twice in succession for the first time since winning back-to-back in 1991 and 1993.

The Americans are actually the betting favorite with a team that includes young super stars such as Justin Thomas and Rickie Fowler along with veterans like Phil Mickelson and Tiger Woods.

The U.S. likes its team make-up and thus its chances to bring home the Cup, but they respect their counterparts and the challenge they will get from the European players and a Le Golf National course that will be set up to the home team’s liking.

This will be the first time since 2010 that the Americans go into the event as the reigning champion.

They, of course, lost to the Europeans that year, starting a string of three consecutive defeats that finally made the players and the PGA of America realize that it was time to circle the wagons and make changes in hopes of changing the American’s fortunes on the golf course.

“I was on the 1993 team and I know how good it feels to win on the other side of the pond,” Love said. “We want to win every time, but we know that’s not going to happen. For a lot of guys, that’s the only thing missing on the resume [winning a Ryder Cup in Europe].

“We had to deal with not winning, period, for so long. We took care of that (in 2016). The new question is: Can they win overseas? That’ll be a big story. They can win at home, but how about there? We’ll put all that talk in the background and go play. We want to win every session, but we need to worry about them one at a time.”

Love isn’t the only connection between the Golden Isles and year’s U.S. team. Local golfers Matt Kuchar and Zach Johnson, who have both played in the past, are also vice captains for the Americans this week in Paris.

The other vice captains are Steve Stricker and David Duval.

Furyk also picked Woods to be a vice captain, but that was before Tiger roared back this year and made the team as a captain’s pick with his quick resurgence upon returning to competitive golf this season after several surgeries on his back that kept him out of the game previously.