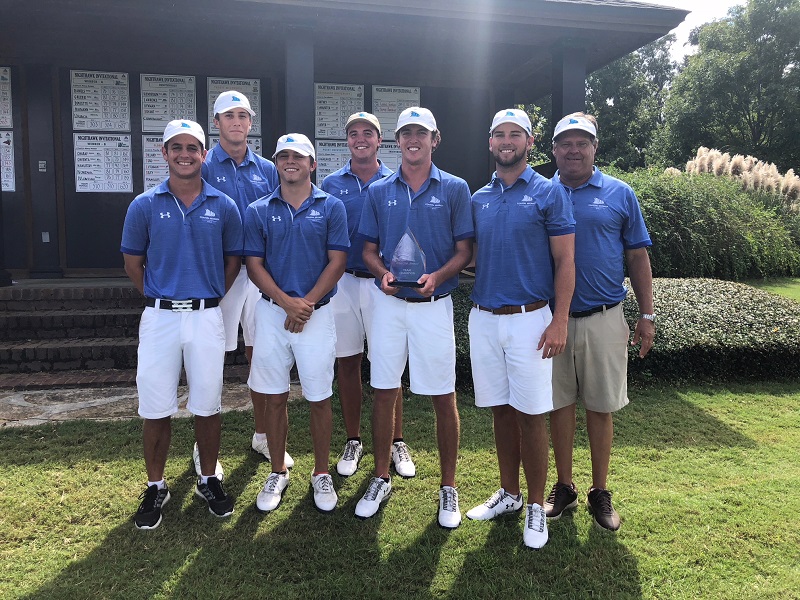 Is the College of Coastal Georgia men’s golf team headed for a big season?

Based on the Mariners’ performance in their first two tournaments of the fall schedule, that answer would be yes.

Led by individual champion Mark David Johnson, the fourth-ranked Mariners won their second consecutive tournament to start the season, claiming the championship Tuesday at the Thomas University Fall Invitational with a record round at the Kinderlou Forest Golf Club in Valdosta.

“This might end up being one of our best teams at Coastal Georgia,” said head coach Mike Cook, who has steered the NAIA program to two national titles but never a conference championship.

Coastal Georgia carded a 12-under-par 276 team score in Tuesday’s second round of the 36-hole event to post an 11-under 565 total and record a 13-shot victory. The team’s previous all-time low individual round on a par-72 course was an 11-under 277.

Johnson made it a sweep of the titles for the Mariners as he shot a 5-under 67 score in round two to walk away as the tournament medalist with a 7-under 137 total that was good for a one-shot victory.

The Mariners won their own Coastal Georgia Fall Invitational two weeks ago when they shot 27-under as a team over 54 holes to win by a whopping 18 strokes.

Johnson paced the team in that tournament also as he finished at 17-under par to record the individual win. The junior has now won four tournaments since joining the Mariners as a transfer from Western Carolina last year.

This week’s team win was the third for the Mariners at the Thomas tournament. They won the event last fall and also in 2014.

The victory was also the 31st all-time for the powerhouse program.

Coastal Georgia opened the Thomas tournament with a 289 score in the first round Monday and that put the Mariners in a tie for first with the host team which is ranked No. 23 in the country and also competes in the Sun Conference with the Mariners.

The Mariners, though, ran away from the Night Hawks Tuesday as the host squad shot another 289 score while the Mariners shot the only sub-par round by any team in the tournament with its 277 score.

With Johnson leading the way, the Mariners also got a 69 from freshman Eli Scott, a 70 from both sophomore Jackson Lawlor and fellow sophomore Chip Thompson while junior Kyle Kidd shot 79.

The top four scores count toward the team’s overall score in each round.

Johnson opened the event with a 70 on Monday and trailed Sam Ledbury of Thomas who shot 69 by a stroke.

In the second round, Johnson went lower with his 67 while Ledbury turned in a second straight 69 and settled for the runner-up trophy.

“I can’t say enough about Mark David’s performance so far this fall,” Cook said. “In two tournaments, he is 24-under-par and his highest score is a 70.”

“Our freshman, Eli Scott, had a sixth in our tournament and now a third,” Cook said. “He’s had three sub-par scores in five rounds, and Jackson Lawlor finished sixth this week and has had a 66 and a 70 in five rounds.

“So with that type of scoring, no wonder we’ve won by such large margins.”

Cook knows the Mariners will be in for a strong test next week when they go to Tarpon Springs, Fla., to play the Cooperhead Course at Innisbrook Resort in the USCB Sand Shark Fall Invitational. Copperhead is home to the PGA Tour’s Valspar Championship each spring.

The course is known for its narrow fairways and challenging greens, and the finishing three holes are nicknamed the Snake Pit for their overall combined difficulty.

“We’ll face a monster next week,” Cook said. “Scores will not be this low at all.”