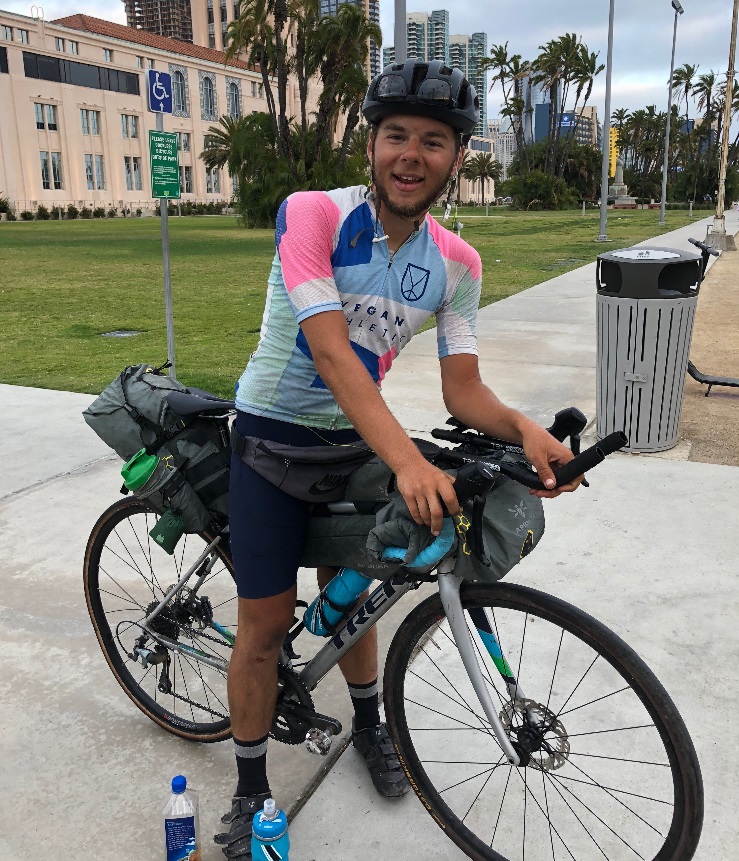 Tanner Tovey used to be a soccer player, so he got plenty of exercise running up and down the field in practice and matches.

But when the now 21-year-old graduated from Glynn Academy in 2015, he was looking for another way to get exercise and stay physically fit.

That led him to take up cycling, which has become his favorite pastime in the last few years.

“It slowly developed into something I wanted to take more seriously,” he says now.

In May, he took what certainly amounts to a really serious bike ride when he rode across country from Jekyll Island to San Diego in 23 days.

“ I just wanted to be at the beach, so I went from the Jekyll Island Convention Center and finished at San Diego’s Waterfront Park which was the closest thing to the ocean for me on the last day,” Tovey says.

“I averaged about 118 miles a day,” Tovey said. “That’s a good bit, but not too much. A lot of people will do like 250 miles a day, but that was a good amount for me to still push myself and also enjoy myself in some of the towns and places along the way.”

He passed through big cities such as El Paso, Tucson and of course San Diego. But mostly, he went through communities smaller than Brunswick.

“The places weren’t overcrowded or overpopulated,” Tovey said. “I stayed in a lot of places that were one church, one gas station towns, places like that.”

Speaking of staying the night, he never spent the night in a hotel during his time on the road.

He usually camped out in these rural communities, possibly behind a church or the local fire station. A pastor at a Texas church once let him stay in his church which had a shower facility and kitchenette that he used to prepare his meal for the evening.

“That was pretty cool,” Tovey said.

He also used an application on his cell phone to locate people in certain communities who like to house guests such as himself during their travels.

“A lot of them are also cyclists or just people who travel a lot,” he said. “I think I stayed with a host five different times.”

Tovey noted that he met some interesting people along the journey including a Buddhist in Mississippi and two geologists in Texas.

“They were all interesting people. That was definitely one of the fun parts of the trip,” he said.

While riding he encountered other cyclists who were on long journeys themselves. On the second day of his trip, while still in Georgia, he came across a group of riders who were near the end of a ride to the East Coast.

In New Mexico, he camped out with another cyclist for an evening and shared life experiences.

“That spot, I just remember the sun setting over the hills. We were out in the middle of nowhere, it was just cool. That’s an experience that stands out,” Tovey said.

That wasn’t the only time he was in the “middle of nowhere”, he says.

“From Texas through Arizona, there were times when you’d ride 100 miles and there was nothing, just desert,” he said. “You wouldn’t see a car pass for hours.

“But, it was beautiful out there and it was pretty cool just to be riding my bike in the middle of nowhere.”

The journey wasn’t all peaches and cream, however.

For starters, he had to ride while carrying all of his necessities including camping gear, clothing which was two sets of regular clothes and two sets of cycling gear, backup tubes and tires, food and water.

Riding his new Trek Domane, a form of endurance bike made for long-distance cycling, Tovey had to get accustomed to the constant riding day after day.

“The first week was the hardest part, both physically and mentally” he said. “My body felt good the rest of the time for the most part.”

In preparation for the trip, he made a “test ride” from Brunswick to Gainesville, Fla. That was the only training he did outside of his normal weekly riding habits.

“I generally ride 100 to 200 miles a week,” Tovey said. “I’ve mostly done day rides before this. The longest ride I’d ever done before this was probably 140 miles.”

He took only one day off from riding during the journey, and he was forced to do that due to a problem with his bike.

“About a week into the trip, I was in Louisiana and had a piece of metal get caught in my brake and it bent it. I had to take it to a local bike shop to get it fixed, so that took a day. But, I kinda needed that time off, too,” he said.

The trip wasn’t without other technical difficulties. He had to stop several times to fix flat tires which he knew would be the case when he started out, thus the need to travel with extra tubes and tires.

“I had eight or nine flats,” Tovey noted. “I’d say that’s about average on a trip like this. People usually have that kinda number.”

Also, on the last day, one of his rims bent, so he had to ride the final 40 miles nursing his bike to the finish line.

“It was like riding over a large rock every rotation, so that was tough,” he said. “Luckily, that was the last day and I didn’t have to get it fixed. That might have taken a couple of days to fix if some place didn’t have the parts.”

Other than those hiccups, the coast-to-coast excursion was a piece of cake for the young cyclist.

“I would describe it as comfortably hard,” Tovey said. “I never suffered really bad. There were only a handful of days when I had to focus to make it through and keep going.

“Most of the time, I was sitting on my bike, putting in the hours, listening to music and just chilling out.”

He also noted that he got fortunate with the weather.

“I only got rained on twice,” Tovey said. “It was pretty hot through New Mexico and Arizona, but nothing too extreme.”

Tovey, who works for a local restaurant that allowed him the time away to make the cross-country trek, said he had no expectations for the trip when he started. He simply wanted a challenge and said he got that and much more from the experience.

“I wanted an adventure and to push myself,” he said. “It seemed like it would be a fun thing to do, to ride my bike across America.

“I just wanted to do it, let it turn out however it did. It did make me realize I have it pretty good here at home.”

Tovey was also proud that he completed the journey on a vegan diet. He made it through the many days on the road eating loads of peanut butter, dried fruit and canned beans and a lot of what he called “gas-station food.”

“I’d start my day with four cups of coffee doused in sugar with maybe a cookie,” he said with a laugh. “I ate about every half-hour or so.

“I’m usually a pretty conscious eater. I actually gained about 10 pounds while I was out there. A lot of it was probably water weight and sodium. I ate a lot of crappy food. The weight fell off pretty fast when I got home.”

Tovey said he doesn’t have any plans for a similar excursion any time soon, but he does have a future idea already in mind.

“I like to maybe go up the East Coast and then across the northern part of the country, maybe to Oregon, something like that,” he said. “It would be a longer trip.”

That may be a few years away, at least, he says.

In the meantime, he figures he’ll take some long one-day rides, maybe something that takes 12-plus hours to finish.

“I might even do a 24-hour ride somewhere around here,” Tovey says.

He also has researched the ultimate climbing challenge called Everesting. That’s when cyclists attempt to climb the cumulative elevation of Mount Everest in one day.

Tovey said he doesn’t have any current plans to attempt Everesting, but he has thought of another similar challenge he might take on locally.

“I’ve thought about doing that on the Sidney Lanier Bridge,” he said. “You’d have to go over and back 73 times.”