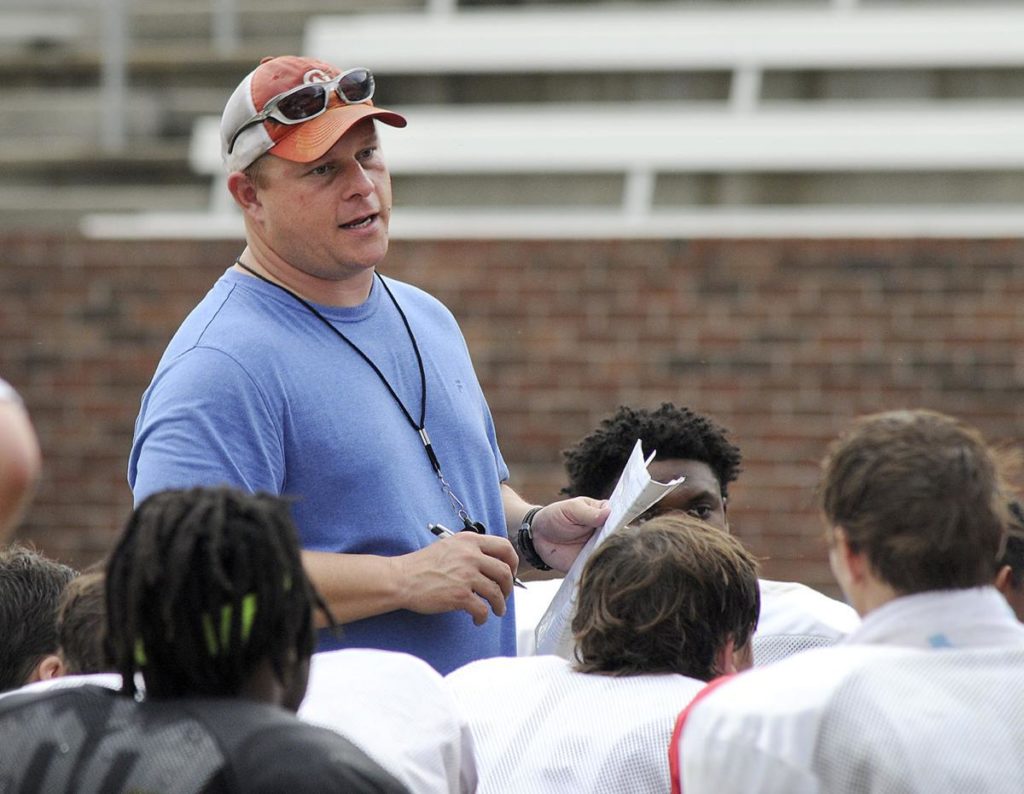 It’s a game that has brought out the best in Glynn Academy in recent seasons.

And, GA head coach Rocky Hidalgo hopes it will do the same once again and also produce the same results it has when the Red Terrors visit the Gators Friday night for another matchup between the Southeast Georgia heavyweights.

It’s a game the Glynn coach looks forward to each season.

“I enjoy playing Ware County. It’s a great environment over there. They’re gonna be swinging from the rafters there Friday night,” Hidalgo said.

The Terrors and Gators will clash at 7:30 p.m. Friday at Memorial Stadium in the heart of Waycross.

Glynn is 2-2 and ranked No. 5 in the Southeast Georgia High School Football Power Poll this week after losing last week at top-ranked Wayne County.

The Gators come into Friday’s matchup sporting a 3-1 record with their only blemish being a 21-14 loss to Coffee three weeks ago. Coffee is the second-ranked team in Class 6A. Ware is ranked eighth in Class 5A and is the fourth-ranked team in the Southeast Georgia power poll. The Gators were off last week.

Friday’s game will be the 14th meeting between the Terrors and Gators. Ware owns an 8-5 lead in the series, but Glynn has won each of the last four meetings in the series.

The Gators toppled the Terrors 42-21 in 2014 which was the first season for Hidalgo at Glynn and also the first for Franklin Stephens as the head coach of the Gators.

The Terrors have won each game between the teams since that meeting including the two games the teams played in the 2015 season when the Terrors played for the Class 5A state championship.

Glynn won the 2015 regular-season game between the teams 14-7 in Waycross. That was a region game and the first win for the Terrors over the Gators since the 2007 season. Ware entered that game ranked second in the state in Class 5A.

The teams would square off again eight weeks later at Glynn County Stadium in the state semfinals with the Terrors winning that game 24-16 in front of a near-capacity crowd that packed the stands at the Brunswick field for the monumental showdown.

The last two years, the teams have met in non-region games as Glynn now competes in Class 6A while the Gators still play in Class 5A. Glynn won 17-10 in Waycross in 2016 while winning 31-7 last year at home.

Hidalgo says as long as he is coaching at Glynn he plans to keep the Gators on the Terrors’ schedule.

That is easy to say right now considering the Terrors have held the upper hand in the series, but the Glynn coach insists he would say the same thing even if the last few games had been won by the Gators.

“I like to play games where something is on the line,” Hidalgo says. “It’s a rivalry game. It’s important. It’s fun for me to coach in games against good teams in a good environment like this.

“There’s a risk involved. It’s a risk-reward game. No one likes to play bad teams 10 weeks in a row. That’s not a lot of fun. To have great victories, you have to have great opponents. That’s the way it works.”

When Hidalgo took over at Glynn, he was familiar with the Ware program since the coach he once worked for at Walton, Ed Dudley, had been the Gators’ coach for several years prior to Franklin Stephens taking over the program.

Dan Ragle established the Gators as perennial power in this area of the state before giving way to Dudley who kept Ware going strong for the five years that he coached the team.

Stephens, who has two state titles as a head coach, picked up where Dudley left off and led the Gators to double-digit win totals his first two seasons before leading the Gators to an 8-4 record and a 5-6 mark the last two years.

“I knew they were the team to beat down here when I got here,” Hidalgo said, “so our goal was to knock them off. I sold our kids on lining up and kicking their butt.

“They beat us that first year. They were better than us. Five weeks later, we might have beaten them, but we weren’t ready to win that game at the time we played.”

That loss left the Terrors with a 4-3 record seven games into Hidalgo’s first season with the team. Glynn would go on to win its next five games including two playoff games while making a run to the state quarterfinals before losing to Northside in that third-round game.

In 2015, Hidalgo coached Glynn to the regular-season win over the Gators, and then in an ironic twist, the Terrors had to defeat the Gators again to reach the state title game the next week at the Georgia Dome in Atlanta.

Since that playoff game, the Terrors and Gators have continued to play during their non-region schedules with Glynn winning the last two games as previously noted.

“We’ve been the better football program. We’ve played more games than they have and we’ve beaten them,” Hidalgo said.

“All the games have been competitive. They’ve been brutal games. The two teams legitimately don’t like each other.”

Two years ago, an illegal hit by Ware’s Ronnie Adams against Glynn kicker August Bowers resulted in an investigation by the Georgia High School Association after Adams, who was flagged for the infraction and thrown out of the game by the officials, took to social media with the claim that his coach told him to make the hit.

Glynn won last year’s meeting at GC Stadium the second week of the season on the heels of a loss to Benedictine in the season opener at home the previous week.

Friday night, Glynn will go to Waycross after a disappointing 29-14 loss to Wayne County to start a tough three-game road stretch that began with that game in Jesup, will continue this week with the matchup against the Gators, and will close next Friday with another road game at surging Camden County.

Hidalgo expects a better performance from his team this week than he saw last Friday against Wayne when the Terrors mishandled two kickoffs that led to 14 points for the hometown Yellow Jackets who  appear headed for a showdown with the Gators to decide the Region 2-5A title in the final game of the regular season.

“Wayne had a good football team. It was going to be an uphill battle for us, we made mistakes and they won the game. We’ve just got to play better,” Hidalgo said.

Hidalgo said his two linemen are listed as questionable for Friday’s game. Their uncertain status concerns him, but the coach also says the Gators present problems regardless.

He also says that Ware’s freshman quarterback, Thomas Castellanos, presents a serious challenge for the Glynn defense. The freshman has thrown for 391 yards and three touchdowns while running for 303 yards and four scores in the Gators’ first four games.

“He’s a good player,” Hidalgo said. “He’s talented, can extend plays with his legs and make people miss. He also throws it well. We’re gonna have to do a good job against him and try to keep him hemmed up.”

The better they fare in that regard, the better the chances the Terrors have to finish with more points than the Gators on the scoreboard.

That’s the ultimate goal for Glynn as it tries to keep alive its stronghold on the Gators.

“We’re going to Waycross to win the football game, not to eat nachos and enjoy their mall,” Hidalgo said.