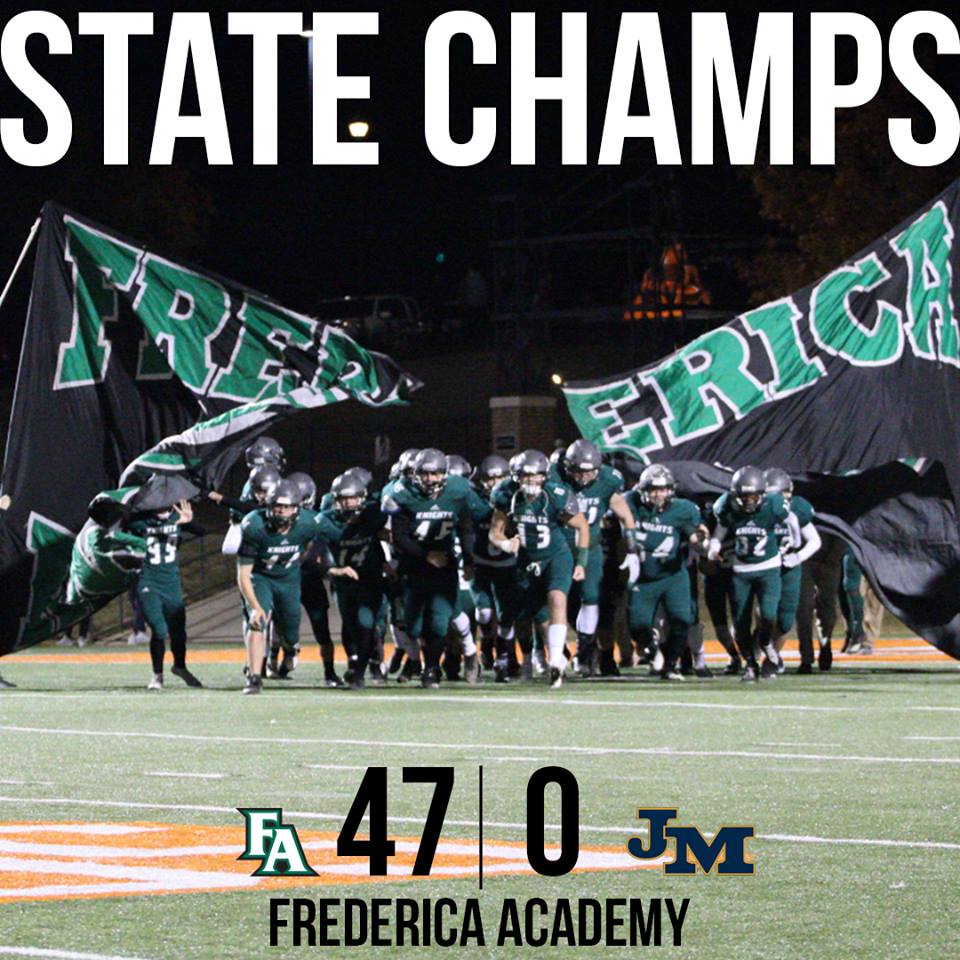 The Frederica Academy football team got a police escort from its St. Simons Island campus to the Glynn County line Friday morning when it left for its state championship game in Macon.

And because they won, the Knights were scheduled to get another police escort from the county line back to campus in the early-morning hours on Saturday.

And who knows? There might be a parade through the streets of the island sometime next week to celebrate the school’s second state title in football.

The Knights claimed this year’s Georgia Independent School Association Class 3A state championship trophy Friday night with a 48-0 victory over John Milledge Academy in a game that was a lopsided as the final score would indicate.

“We felt like we had a good game plan going in, and our kids just executed it really, really well,” said Frederica head coach Brandon Derrick. “They did exactly what we worked on all week.

“We were very good tonight from top to bottom. We played with a purpose. Our kids weren’t going to be denied a state championship.”

The game made you wonder how the Trojans even managed their 14-13 overtime victory over the Knights near the end of the regular season even with Frederica playing a sub-par game.

On Friday night at Five Star Stadium at Mercer University, the Knights (10-3) dominated the previously unbeaten Trojans (12-1) as they raced out 28-0 halftime lead and continued their onslaught in the second half.

The Knights only had three possessions where they did not score including their first offensive series of the game and two second-half possessions.

Senior quarterback and Auburn commit Jaylin Simpson was on target through the air, finishing 14-of-16 passing for the 217 and two touchdowns. He also ran for a score before halftime.

Frederica’s leading rusher was Isaiah Jackson who came into the game with more than 1,400 rushing yards for the season. The senior running back carried 11 times for 85 yards and a touchdown in the victory.

“We got our kids in space, and they made plays with their athleticism,” Derrick said of the offensive outburst.

The Knights stuffed the John Milledge offense from start to finish. The Trojans managed just 122 total yards and picked up only 45 yards on the ground.

Frederica held their top ballcarrier, sophomore Amaad Foston, to only 71 yards on 30 attempts.

JMA senior quarterback Brandon Bellflower was just 4-of-16 passing for 77 yards while also throwing an interception that led to a short field and a score for the Knights.

The shutout was the first of the season for the Knights. John Milledge had not been shut out since the 2010 season.

Following their loss to John Milledge on Oct. 26, the Knights outscored their final four opponents including their three playoff foes by 210-58.

“Our kids decided they weren’t going to lose again and they were going to beat the heck out of everyone,” Derrick said.

The Knights were making their second appearance in a state final but their first in GISA’s highest classification. They won their first football title in only their second season when they won the Class A championship back in 2012.

This title came in a season when the Knights started with championship aspirations, and quite frankly it was probably state championship or busts for this talented team that had several college prospects in its senior class.

And all those prospects showed out Friday in their final game in Frederica green to help the Knights finish off their “March to Mercer” in convincing fashion.

JMA ate up half of the first quarter on its opening drive but came away without any points after it lined up for a field goal and didn’t get the snap down with their holder then trying unsuccessfully to run for a first down.

The Knights went three-and-out on their first series, but the next time they got the ball after a punt, they went 75 yards in four plays with Brunson scoring on a sweep from 7 yards out late in the first quarter for a 7-0 lead after the extra-point kick. Sheffield picked up 63 yards on a dazzling run two plays earlier to set up the Knights first-and-goal inside the JMA 10-yard line.

Early in the second quarter, Deke Jernigan intercepted a pass for the Knights and his short return to the JMA 22 put the Knights in great position to add to their lead.

Despite consecutive penalties, the Knights would score in the short field on two plays – a 24-yard pass from Simpson to Brunson and then an 8-yard keep by Sheffield for the score.

Frederica went up 21-0 with 5:06 to go before halftime when it quickly drove 65 yards and scored on a 1-yard run by Harry Veal who took a direct snap as the quarterback.

The Knights made it 28-0 in the closing minute of the half on a 6-yard run by Jackson to seal a 59-yard drive.

FA finished the first half with 256 total yards while checking the Trojans to only 39 on 30 plays.

The Knights started the second half with a bang. On their very first play, they flipped the ball around in the backfield a couple of times before Simpson tossed a 53-yard bomb to a wide-open Brunson down the middle of the field for a quick score and a 34-0 lead.

The Trojans did drive down to the FA 2-yard line early in the third before the Knights stopped them on fourth down to deny JMA its first points.

Late in the quarter, the Knights got an 8-yard run for a touchdown by Sheffield to make it 41-0.

With a running clock in the fourth period, the Knights scored one last time with 8:27 to play on a 6-yard pass from Sheffield to Simpson to make it 48-0 following the extra-point.

As you might imagine, the Knights showered their head coach with the Powerade left in the water cooler after they were awarded the championship trophy on the field after the final horn.

“I’m still in game mode, so (the championship) probably won’t sink in with me for a day or two,” Derrick said. “I’m just tickled for the kids and our coaches who did a great job all year. It’s just great for our school and community.”