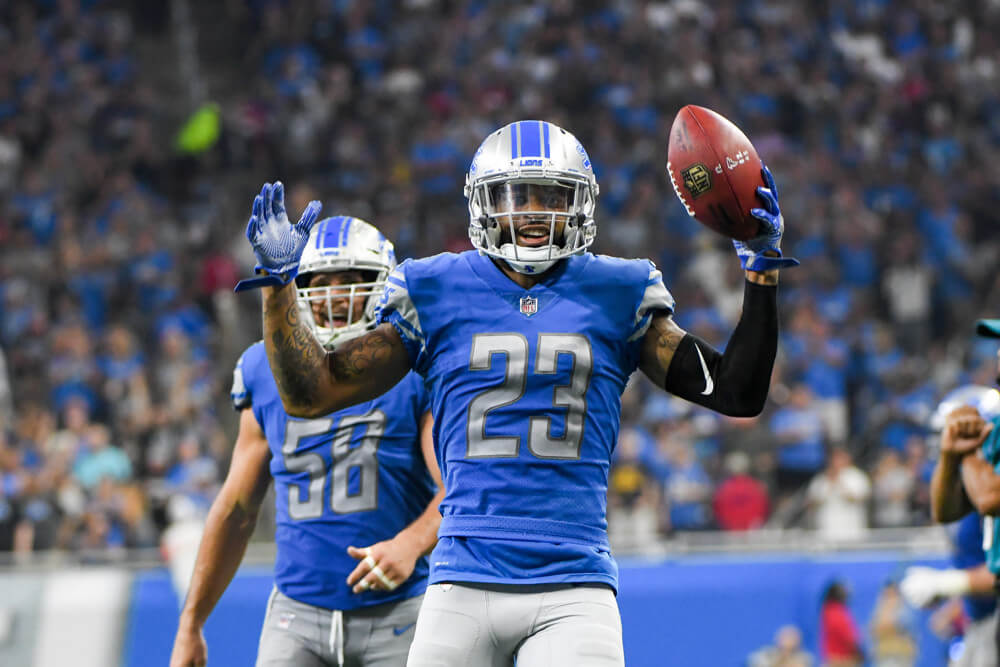 Darius Slay will begin training camp with the Detroit Lions later this month to kick the preparations for the 2018 season into high gear.

Slay is not only one of the premier players on the Lions’ roster. He is also among the NFL’s marque names going into the upcoming season.

Goggle – Darius Slay is all smiles on the sidelines.

Earlier this summer, the former Brunswick High standout was voted to the NFL’s Top 100 Players list by his peers in the game. He actually cracked the top 50, earning the No. 49 position in his first appearance on the prestigious list.

Slay said this past week while working his local Big Play Slay youth football and soccer camps in Brunswick that he was honored to earn the distinction, yet he quickly pointed out he isn’t going to rest on his laurels.

“It’s great to be recognized for your talent,” Slay said. “But, that was last year. I’m already concentrating on a whole new year, just want to keep playing at a high level.”

Last year, Slay took to Twitter to express his negative opinion of the Top 100 list which is revealed by the NFL Network during the offseason. He called it “junk” and fake” obviously because he felt that the Lions were misrpresented on the list.

“I’m just doing what it takes to be the best I can be,” Slay said. “I just have to keep grinding.”

Slay was picked in the second round by the Lions in the 2013 NFL Draft after finishing out his collegiate career at Mississippi State.

Last season, his fifth in the league, Slay led the NFL with eight interceptions. He was named to his first Pro Bowl and was named First-Team All-Pro.

He didn’t think his 2017 campaign was a breakout season, though.

“I just played ball,” Slay said. “I think I’ve always played at a high level. I just had a lot of picks last year. That was the only difference. I had the numbers.”

Slay was matched against an opponent’s top receiver most weeks last season. He faced off with the likes of Atlanta’s Julio Jones, Pittsburgh’s Antonio Brown and New York Giants’ Odell Beckham.

He relishes those matchups against the top receivers in the game.

“I’ve never been afraid to compete, nor will I ever be,” Slay said. “I love to compete.”

In an early-season loss to Atlanta last season, Slay intercepted two Matt Ryan passes for his first-ever game with multiple interceptions. He also had a two-interception game later in the season in a victory over the Chicago Bears.

Slay said he has a goal of making the Pro Football Hall of Fame at the end of his career.

“It’s just like my dream. I’ve got a great opportunity,” he said.

You can see Slay’s Top 100 video which was released when the list was revealed by clicking here.