Pirates and Knights pick up Friday night wins, but Glynn -Camden game gets postponed by weather. 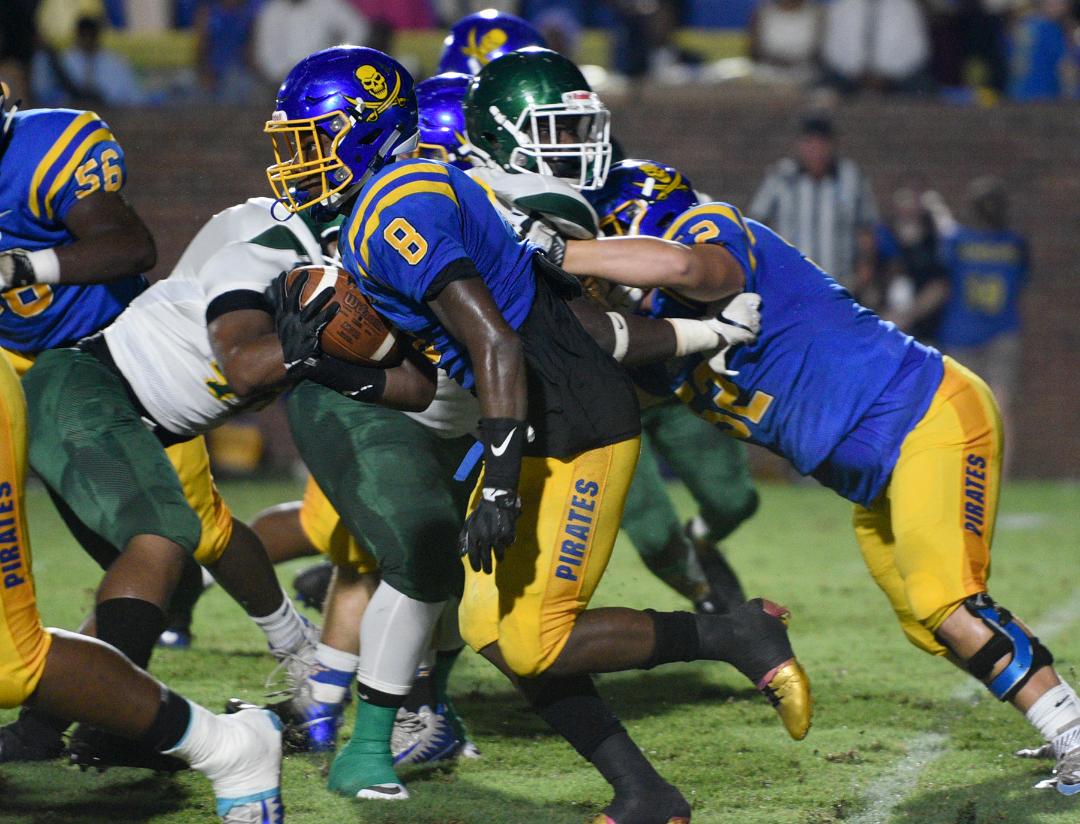 The Brunswick Pirates won their second consecutive game Friday night as they rolled to a 42-6 victory over Monroe on Homecoming Night at Glynn County Stadium.

The win enabled the Pirates (3-3) to finish with a .500 record in the non-league portion of their schedule.

The Pirates will kick off their Region 2-6A schedule next Friday with a home game against Richmond Hill. Kickoff will be at 7:30 p.m. at Glynn County Stadium.

On Friday night, after a scoreless first period, the Pirates would score three times in the second quarter to take a 21-6 cushion into halftime.

Brunswick’s first score came just seconds into the second stanza when a short pass from KJ Lee to Chuckobe Hill went for a 25-yard score. Avery Yoak’s extra-point kick made it 7-0.

The Pirates would cover 55 yards in two plays later in the quarter with senior running back Jaylen Trimmings ripping off a 49-yard scoring jaunt and Yoak’s kick making it 14-0.

Monroe (3-4) would get its only points of the game on a 2-yard run by its 230-pound quarterback David Dilliard with just over seven minutes to go before halftime. It was his 52-yard third-down completion to Desmond Ansley to the Brunswick 2-yard line that set up the touchdown.

The Tornadoes would try for two points, but Freddy Towns broke up a pass in the end zone to keep the score 14-6.

In the final moments of the opening half, the Pirates would get the ball at the Monroe 33 with 1:47 left before halftime and would get a 2-yard run off left tackle by Trimmings to make the halftime score 21-6 as Yoak again added the extra-point.

Lee hit Che Foy for 16 yards to set up the scoring run.

On Monroe’s possession following the second BHS score, AJ Wilson scooped up a fumble deep inside the visitors’ territory and would return it for the Pirates’ final score.

For the game, Brunswick finished with 396 total yards with 303 passing and 93 rushing.

Lee was 18-for-25 for 275 yards and the three touchdowns. Trimmings carried for 102 yards and had the two scores. Foy led the BHS receivers with nine catches for 146 yards.

“We’re getting better, but we still have to get better of executing the fundamentals of football across the board,” said BHS coach Sean Pender.

“We wanted to have a balanced attack and were successful with that, and I thought we played well in special teams.

“KJ is starting to get into the flow. The biggest thing is he didn’t turn the ball over for the second game in a row, and hopefully that’s a sign that he is maturing.”

The Knights opened Region 2-AAA play in the Georgia Independent School Association with a rousing victory over Pinewood which spoiled the annual Homecoming game for the Crusaders.

Frederica moved to 4-2 overall with the win while Pinewood dropped to 2-5 for the season.

Friday’s game was played with a running clock after halftime as Frederica Academy took a 32-0 advantage into the intermission break.

The Knights dominated the Crusaders from the opening whistle, getting touchdowns from several different players in the game’s first 24 minutes.

Isaiah Jackson ran for two first-half scores for the Knights, finding paydirt from 8 and 11 yards in the first period.

Denver Anthony also scored twice for FA with a 7-yard run for the team’s third touchdown and he finished out the first half with a 32-yard scoring jaunt.

Also before intermission, Jaylin Simpson rumbled 27 yards for a TD in his first game back at quarterback after missing all but the first game of the season with a serious turf toe problem.

After halftime, Pinewood would get on the board before Avery Cobb dashed 52 yards for Frederica’s last score of the night.

The Crusaders did punch in a second touchdown before the end of the game.

Frederica will be back at home next Friday against Westfield.

The Red Terrors and Wildcats will attempt to finish out their game Saturday after severe weather postponed their contest Friday night at Chris Gilman Stadium in Kingsland.

Play is scheduled to resume at 11 a.m. Saturday with Camden leading 7-3 with 7:35 remaining in the second quarter.

Before the game was delayed by a storm, Camden scored on a 15-yard run by Jamie Felix for an early 7-0 lead.

Chase Gabriel connected for a 46-yard field goal to get the Terrors on the scoreboard.

The Wildcats entered the game with a 4-1 record while Glynn is 3-2 for the season with one of those wins being a forfeit victory over Fort Dorchester which played an ineligible player against the Terrors in the season-opening game for both teams on Aug. 17.

Glynn is scheduled to have an open date next week prior to opening its region schedule while Camden is slated to play at home against Colleton County (S.C.) before beginning its league schedule in two weeks.