Standout lineman to enroll at UGA in January, begin working out with team 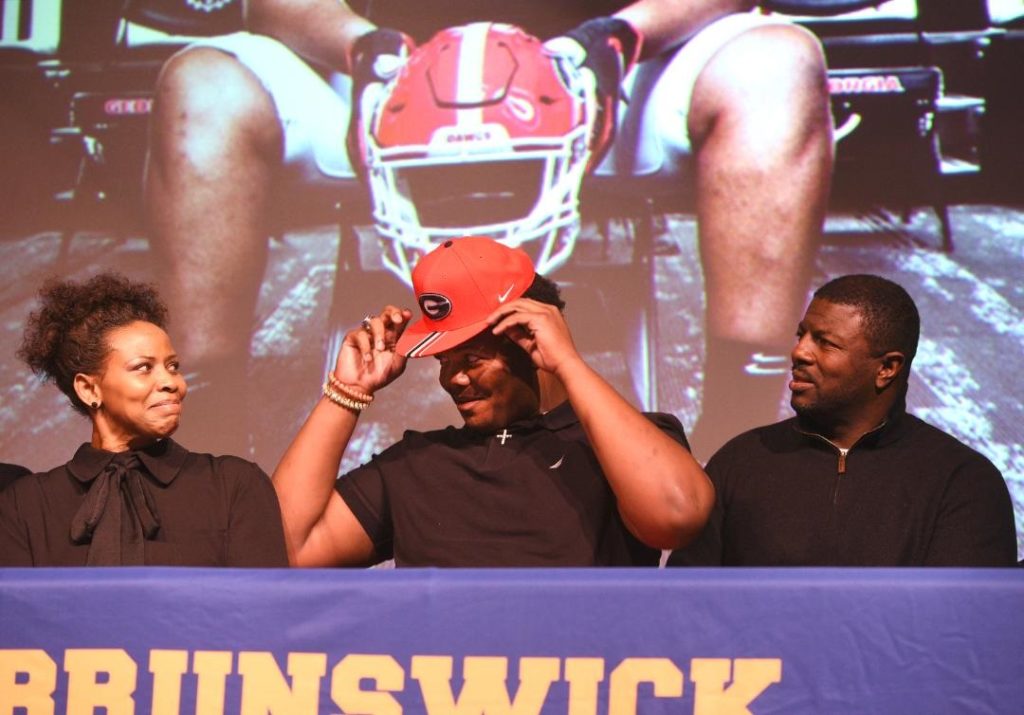 Warren McClendon is trading in the Brunswick blue and gold for the University of Georgia red and black.

The Pirates’ standout offensive lineman made his commitment to the Bulldogs official on Wednesday when he signed a letter of intent to play for Georgia at his signing ceremony on the Brunswick campus.

Wednesday was a day McClendon had been looking forward to since getting his first official scholarship offer as a freshman.

“I’m glad to get it over with, signing the papers and officially becoming a Dog,” McClendon said.

McClendon had been committed to Georgia since mid-July when he made his college choice publically known.

The day the news broke, AllOnGeorgia was among the first media outlets to talk with the four-star prospect about his decision to play for the Bulldogs. You can read the detailed story here.

Just two weeks ago, only days after the Bulldogs fell to Alabama in the SEC Championship Game, Georgia head coach Kirby Smart and offensive line coach Sam Pittman visited with MClendon and his family in Brunswick as they returned to the recruiting trail prior to the early signing period which opened Wednesday.

McClendon, 6-foot-4 and 320 pounds, is part of a Georgia recruiting class that is widely considered the No. 2 class in America at the moment following the top-ranked class of Alabama.

The signing ceremony for McClendon at the BHS auditorium was attended by coaches and teammates, fellow students and school administrators.

McClendon sat on stage surrounded by his family including his mother and father, sister, grandmother, aunts and uncles.

It was no secret that McClendon planned to honor his commitment and sign with the Bulldogs. He arrived for his big moment wearing a black shirt and also red pants with little Bulldogs printed on them.

A large photo of McClendon wearing a black Georgia jersey and the famed Silver Britches and holding a Georgia helmet while sitting in the team locker room was displayed on the video screen behind the McClendon family. This particular photo is customary for prospects who come to visit with the Bulldogs in Athens.

And in the middle of the table in front of McClendon was a red cap with the black trademark Georgia “G” like the one on the Bulldogs’ helmets. He would put on the cap after announcing his intentions to sign with the Bulldogs.

During his brief speech, MClendon thanked his family, friends, teammates, coaches and teachers for their support throughout his high school career with the Pirates.

As he signed his scholarship papers, his uncle Willie McClendon who was on stage with the family was visibly emotional. Tears of joy streamed down his cheeks as he watched another McClendon become a Bulldog.

Willie McClendon, of course, was one of Georgia’s all-time great running backs who signed with Vince Dooley’s Bulldogs out of Glynn Academy and was later a member of the UGA coaching staff following his professional playing days.

Tyrone McClendon, another uncle, also played for the Bulldogs as did Bryan MClendon, son of Willie and cousin of Warren. Bryan McClendon was also an assistant coach with the Bulldogs and led Georgia to a bowl victory as interim head coach when Mark Richt was dismissed following the 2015 season.

The ceremony included video highlights of McClendon dominating opponents while playing along the BHS offensive line.

Also, Santa Claus made a surprise appearance on the stage as he was already at the high school for another function Wednesday morning.

Santa came with a football that he tossed Warren McClendon’s way and McClendon snatched it out of the air with ease.

“For an offensive lineman, that was pretty good, wasn’t it,” Santa asked as he turned toward the audience.

Santa then shook the hands of everyone on the stage before leaving, presumably headed back to the North Pole to get ready for his upcoming big night.

The McClendon ceremony also took place on the final day as principal for Dr. Scott Spence, a former BHS football player himself who roots for the Bulldogs every fall. Spence announced before the school year began that he would be retiring at the end of this month.

The ceremony was pretty cool for the outgoing principal, too.

“Warren is one of the finest young men I have ever been around,” Spence said. “He’s just an all-around great person.”

BHS coach Sean Pender, who has coached McClendon the last two years, said the all-state lineman is more than a talented football player. He spoke about his character during the ceremony.

“The first time I ever met Warren, or found out what his character was, what kind of man he was, I had just taken the job,” Pender told the crowd during his opening remarks. “I was going to do a speech and a group of men came in, Warren was just a sophomore, going into his junior year. The whole team came and gathered, and at the end, I asked for all the seniors to stay. Everyone that wasn’t a senior got up and left except for Warren.

Pender said after the ceremony that McClendon’s athletic prowess, strong academics and impeccable character made it easy for colleges to offer him a scholarship. And, they did so by the dozens over the last several years.

“He’s got it all. The talent and all the intangibles,” Pender said.

And now, he is a Bulldog. McClendon will enroll in classes at UGA in early January and start working out with the Bulldogs immediately. As an early enrollee, he is also eligible to participate in spring practice with the team.

McClendon closed his speech by uttering those two simple words which express the sentiments of the entire Bulldog Nation.

Column: Recruiting is a game before the games
GHSA to hold Reclassification Committee Meeting on Jan. 31
Posting....