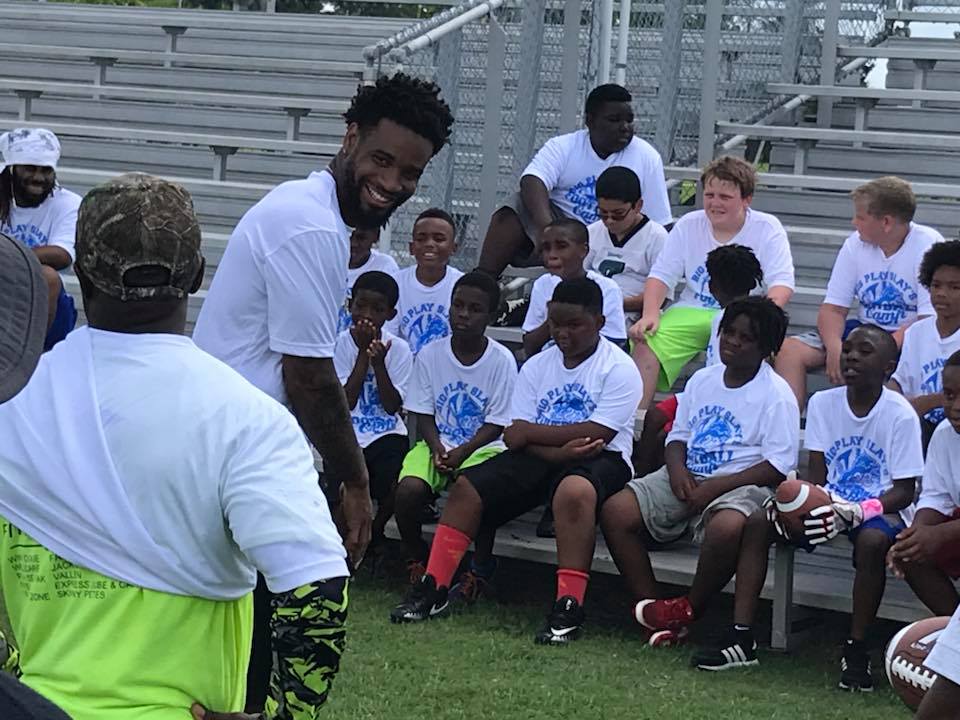 “How many of you scored today?” Darius Slay asked the kids as they huddled in the stands after camp.

“More importantly, how many of you had a pick?” Slay then asked.

Slay then told the kids to point out who threw the interceptions, looking back at the coaches who stood behind him.

The kids came out of the stands and promplty identified the culprits.

That was just some of the interaction that Slay, the local NFL star, had with the campers in the first of his two football camps held Saturday in the sweltering heat and humidity at Howard Coffin Park in Brunswick.

Despite the heat and also some pesky gnats, Slay appeared to be enjoying himself, and most important was that the kids seemed to be having fun in the company of the former Brunswick High football standout who now plays for the Detriot Lions.

That, Slay said, was the day’s main goal.

“I love the kids, mine is out here too,” he said. “I just wanted to get them together, keep them from sitting around the house.

Saturday morning was devoted to smaller kids, those in third- through fifth-grade. Some 75 campers went through drills with Slay and the assembled volunteer coaches who gave up their personal time to assist with the free camp for the local youth.

In early afternoon, a smaller group of about 25 players went through the middle-school camp that was open to all sixth- through eighth-graders. Slay and a smaller group of coaches put the campers through a series of drills during this session.

“It’s a little more serious,” Slay said, “and I want them to compete against each other.”

Slay, who led the NFL in interceptions last season and made his first Pro Bowl appearance, gets help organizing the camps from his cousin Shawn Williams who also directs the local Coastal Outreach Soccer Program.

Kevin Price – Darius Slay runs through a drill with a player during camp action.

This is the fifth year of the Big Play Slay camps in Brunswick, and the weekend sessions kicked off Friday with a soccer camp that also included instruction for younger kids in the morning and older kids in the afternoon.

Slay laughed when asked what he knew about soccer, but Williams said he provided quality help in that camp as well while working with the campers in agility-type drills and speed work.

“Footwork is footwork,” Williams said. “Some of the drills he does as a defensive back we incorporated into the camp yesterday. It’s really similar, so we spent the last hour with him working with the soccer kids on their footwork.”

The local camps were part of what has been a busy last few weeks for Slay who got married locally exactly two Saturdays ago. Last week, he was on his honeymoon with his bride who also attended Saturday’s camp, but this week he went back to work before coming home for the youth camps.

He participated in workouts Tuesday and Wednesday with other NFL defensive backs including Richard Sherman. On Thursday, he was back in Detroit for a youth camp where he instructed high-school defensive backs that were chosen to attend the select camp with the Lions’ cornerback.

Then, he came to Brunswick for the weekend to do the local camps. Slay will begin training camp for the upcoming 2018 season with the Lions in July.

“He does a lot to give back,” Williams said. “He keeps the conversations real with the kids, telling them the things he had to overcome to have the success he’s had.”

Williams said he also wants Slay to stress that while he was born with tremendous athletic ability he had to develop his talents to make it to the professional ranks.

“We talk about it with the kids. He wasn’t an instant success in the NFL. He had to learn and work to get that. You have to work to achieve anything in life, and it’s just a blessing for him to be able to tell kids in our community his story.”

When he wasn’t working with the campers on Saturday morning, Slay spent time on the sidelines talking with other on-lookers and taking individual photos with the campers who lined up to have their picture taken with the NFL All-Pro by a professional photographer.

A group photo of all the campers and coaches was all taken in a set of bleachers on the far side of the field.

Slay also gave away some equipment to the Georgia Stars youth team which had the most participants in the morning camp.

Each camper in attedance got a Big Play Slay Camp T-shirt which many wore during the camp. They also got a tote bag and were served lunch at the conclusion of the event.

“I like to do this,” Slay said. “Like I always say, we didn’t really have things like this when I was a kid. I just do stuff to give back and hopefully help these kids become better players. I think about it all the time. Maybe I would have been a better player if we had something like this growing up.”

He added the camps are about more than football, though.

“We definitely talk about other things. Some crazy things have happened here lately, and we talk about keeping a balance, staying out of trouble, especially if they have a goal and something they want to try and achieve.”