A friend of the family of Ahmaud Arbery says he and family members met with District Attorney Jackie Johnson about the case, even after she recused her office due to conflicts of interest.
He also said she vowed to ‘take the case back and give it to someone else’ if the family was unhappy with the result, but that they could always sue for money if there was no indictment. 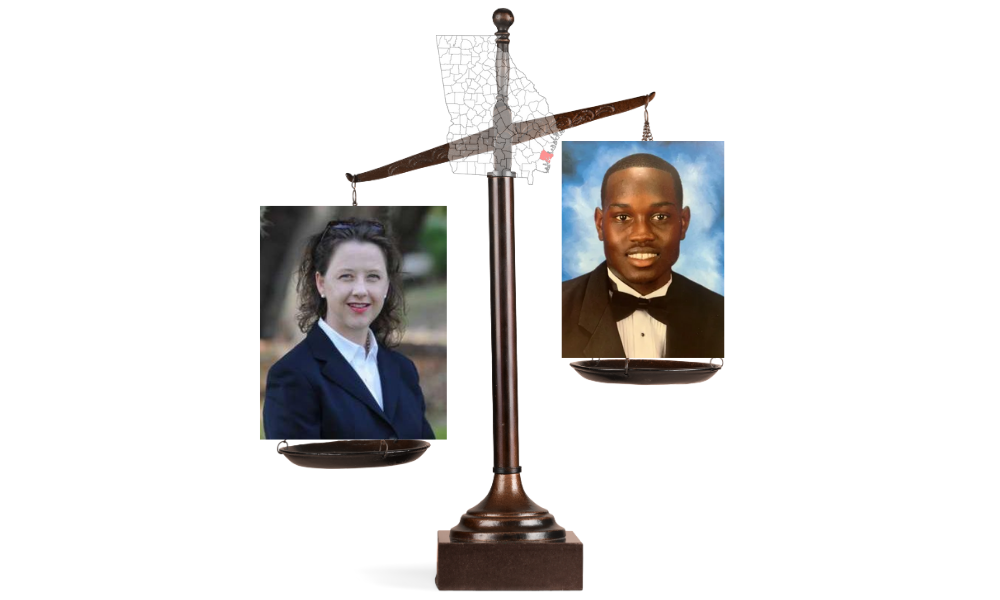 A Glynn County resident who is close to the family of Ahmaud Arbery says that District Attorney Jackie Johnson continued to meet with concerned family members despite her recusal from the case due to a conflict of interest.

The first hand account follows several months of negative publicity regarding Johnson’s conduct as District Attorney, investigations by outside agencies, threats of legal action against Glynn County Commissioners and media outlets, and calls by more than 300 lawyers from around the state asking Johnson to step down from her elected position.

Gary Cook has been friends with Ahmaud Arbery’s father, Marcus Arbery, and uncle, Gary Arbery, for several years so he was a natural confidant and companion when tragedy struck the Arbery family. He says he reached out to the District Attorney’s office on behalf of the family a week after Ahmaud was killed (on February 23) because an arrest had not yet been made in the case. On March 3rd, Cook, Marcus, and Gary met with Jackie Johnson, Liberty Stewart, and a victim advocate to discuss the case, despite the recusal by the entire office on February 27, 2020.

Arbery Family Meets with Jackie Johnson and Others

Cook says during the March 3rd meeting, Johnson told the family that she had ‘not seen any of the evidence,’ and that immediately upon receiving the phone call from the Glynn County PD, she

asked the Attorney General’s office to appoint someone because of a former employee of the office, referencing Greg McMichael. Cook said that because of the way Johnson described the process and referenced Waycross Judicial Circuit DA George Barnhill, he and the family were under the impression that the state had appointed Barnhill to handle the case. During the meeting, Cook asked Johnson if Barnhill’s son working for her was a conflict of interest as well, but Johnson replied that the state was aware of the familial connection – a claim the state would later refute. Johnson reportedly told the family that the pressing issue for the state at that time was ‘gathering evidence’ – though at the time of the meeting, it was the Glynn County Police Department that was charged with gathering evidence in the Arbery case- and that the case may not ‘stay’ in the hands of Barnhill.

Before the meeting was over, Cook says Jackie Johnson told him and the family that if they were not satisfied with the DA’s decision, she could ‘take the case back and give it to someone else.’ She also reportedly said that if there was no indictment, the family could ‘always sue for money.’

Cook said the family was extremely upset when the meeting concluded, having lasted only twenty minutes, a sentiment that was only exacerbated by Johnson asking when the family planned to hold a service for Ahmaud when it had already taken place three days prior. “We just looked at her like, ‘You’re not concerned at all,’” Cook said.

That was not the last time Johnson would meet with the family, however. Before the story made headlines and a New York Times expose shed light on the process as a whole, the District Attorney’s Office reached out to Cook in early April. He says this time Mark Spalding, an office manager for the DA’s office, called and asked Cook to bring the family back in for another meeting.

Johnson allegedly told the family that Barnhill ‘did not think there was a crime committed and there was not enough evidence to move forward,’ citing an April 7, 2020 letter sent by Barnhill to the Glynn County Police Department in which it was Barnhill that made conclusive investigatory findings. Cook says the family was irate over the news and Johnson told them she had asked someone else in the state’s [Attorney General’s] office to appoint another district attorney. The meeting was extremely short, and the family left after only a few minutes.

A week later, on April 13, the case was assigned to Atlantic Judicial Circuit District Attorney Tom Durden by the Attorney General’s Office, and on April 26th, the New York Times would run a feature piece on the lack of movement on the case, but it would be May 5 before the now-viral video gave the case the attention necessary to draw career-changing scrutiny of Jackie Johnson.

But what Johnson reportedly told the Arbery family does not align with documentation that has now been made public and prompted investigations from outside agencies. 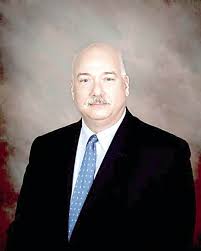 For starters, Cook says Johnson never told the family that she personally called Barnhill in the wake of the shooting and did not report that Barnhill desired to turn the case over to someone else because of his familial conflict of interest and outcries by Ahmaud’s mother. Johnson’s claim that she called the state immediately upon learning of the shooting is refuted by documentation showing she waited three days to ask the state to appoint her prosecutor of choice, a request the state honored.  “She covered all that up from us,” Cook said. It was not until the April 7 letter by Barnhill was leaked that the Arbery family learned Johnson had no input in the reassignment of the case to Durden.

At the time of the first meeting, the Brunswick Judicial Circuit was no longer handling the case. Johnson had passed the case off to her friend George Barnhill, though it was not done in accordance with the law. Nevertheless, once a District Attorney recuses themselves from a case, the office no longer has authority to make any decisions and under state law would not be permitted to ‘ask someone else’ to handle the case either.

State law under OCGA 15-18-5 requires that when conflicts of interest arise, the district attorney contact the Attorney General’s Office for the appointment of a special prosecutor. Similarly, “Once you have a conflict, the prosecutor’s office is done — no indictments, no accusations, no bonds and no finding a substitute prosecutor,” annual training presentations by both the Georgia Attorney General’s office and the Prosecuting Attorneys’ Council of Georgia read.  But to avoid even the appearance of impropriety, recusals apply to the entire Office and make no exception for duties conducted by employees of the district attorney.

Other Allegations of Prosecutorial Misconduct

The Brunswick Judicial Circuit is no stranger to controversy surrounding conflicts of interest.

AllOnGeorgia previously reported that Johnson’s office skirted Georgia law when she appointed her own special prosecutor in the case involving former Glynn County police officers, but continued to direct case proceedings through her office and make decisions on bond conditions even after that appointment was made.  One of Johnson’s ADA’s also made headlines for his conduct in the infamous Sasser murder case and continued media pressure led Johnson to recuse herself from yet another case earlier this year.

The AJC scrutinized Jackie Johnson in May after news surfaced that Johnson waited three days to contact the Attorney General’s Office for assignment of a prosecutor in the Ahmaud Arbery case and even made a recommendation to the Attorney General’s Office about who to assign, noting she had already been in contact with Waycross Judicial Circuit DA George Barnhill. Carr’s office ultimately took Johnson’s recommendation before Barnhill stepped aside and Atlantic Judicial Circuit DA Tom Durden was appointed.

Both the Georgia Bureau of Investigation and the U.S. Department of Justice are investigating the circuit’s handling of the Arbery case.

Johnson has a contested election this November against Independent candidate Keith Higgins, who gathered nearly double the required signatures to appear on the ballot, despite the state’s relaxed petition requirements due to COVID-19. More than 285,000 people signed a petition in May of this year calling on Johnson to resign from her post due to her handling of the Arbery case.

April 7 letter from George Barnhill is below. 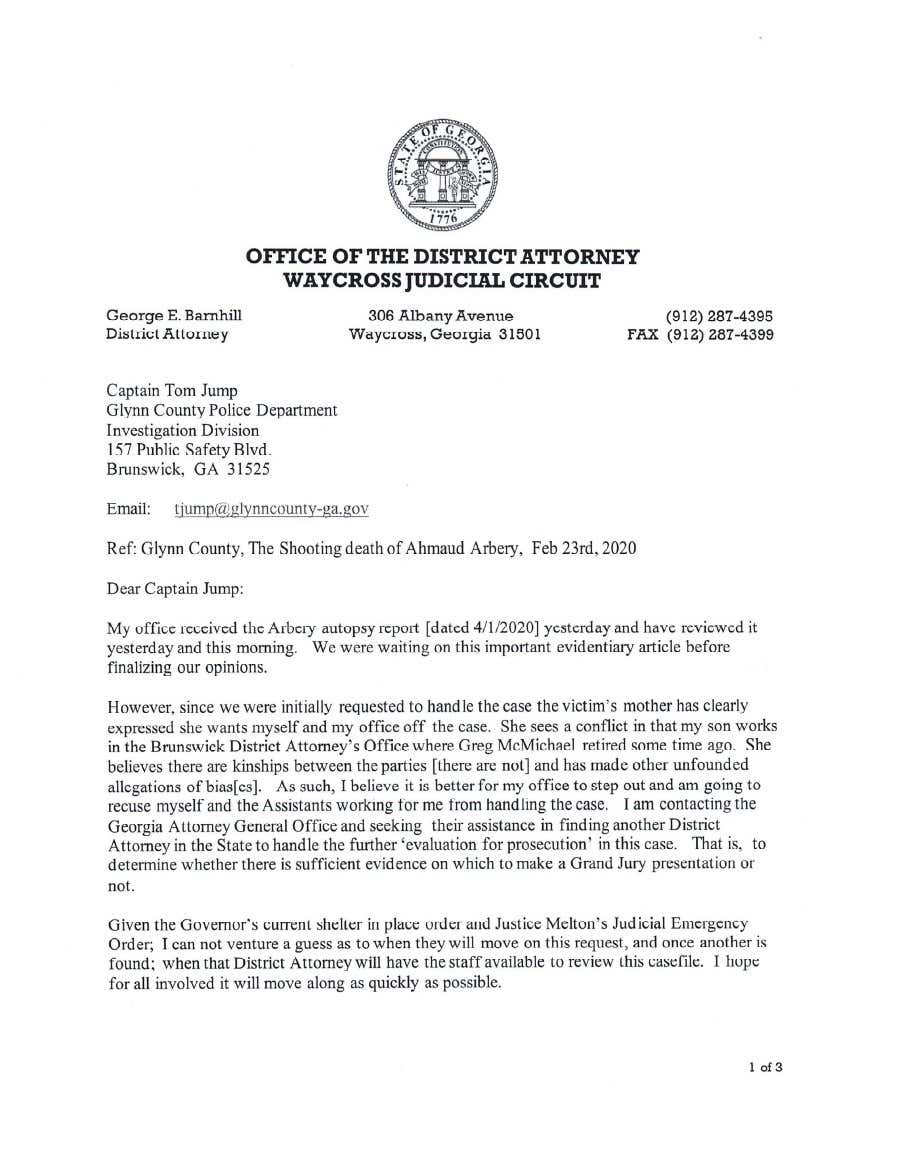 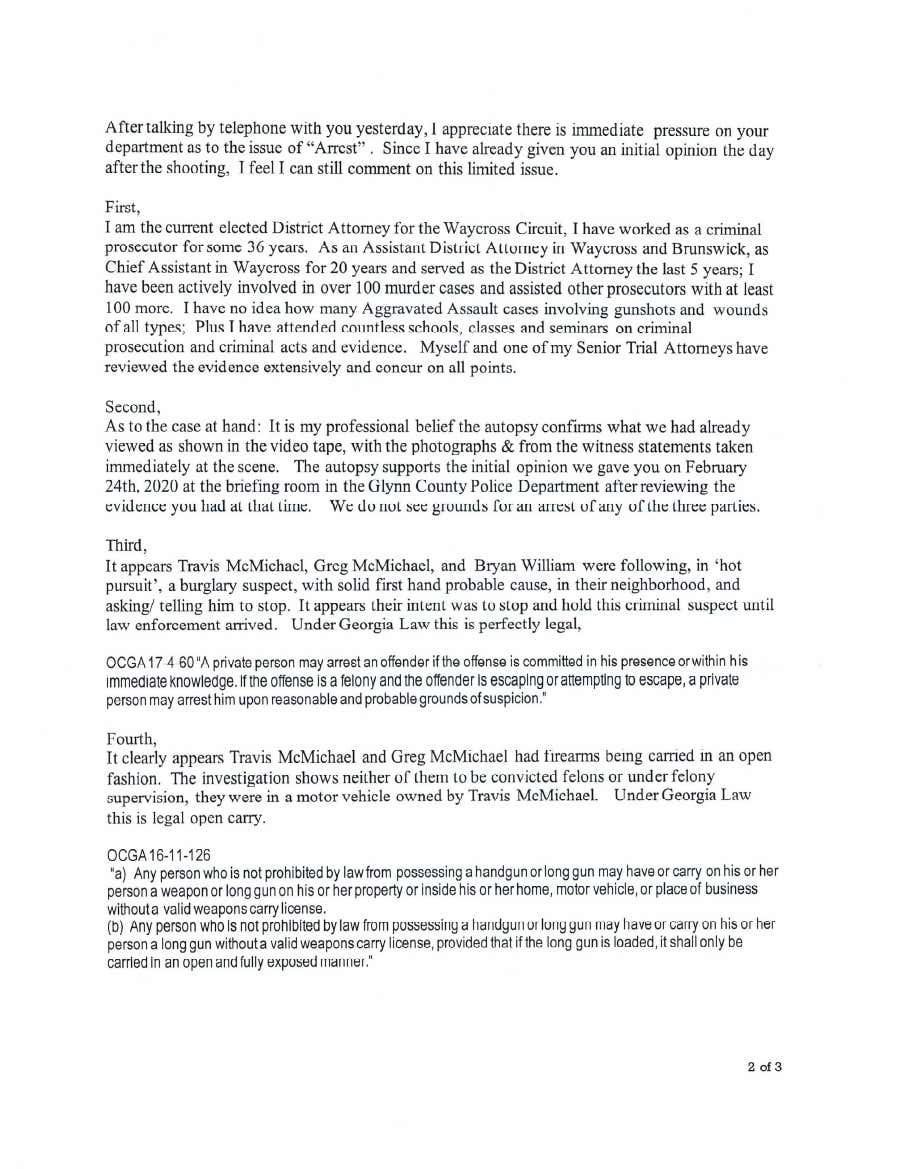 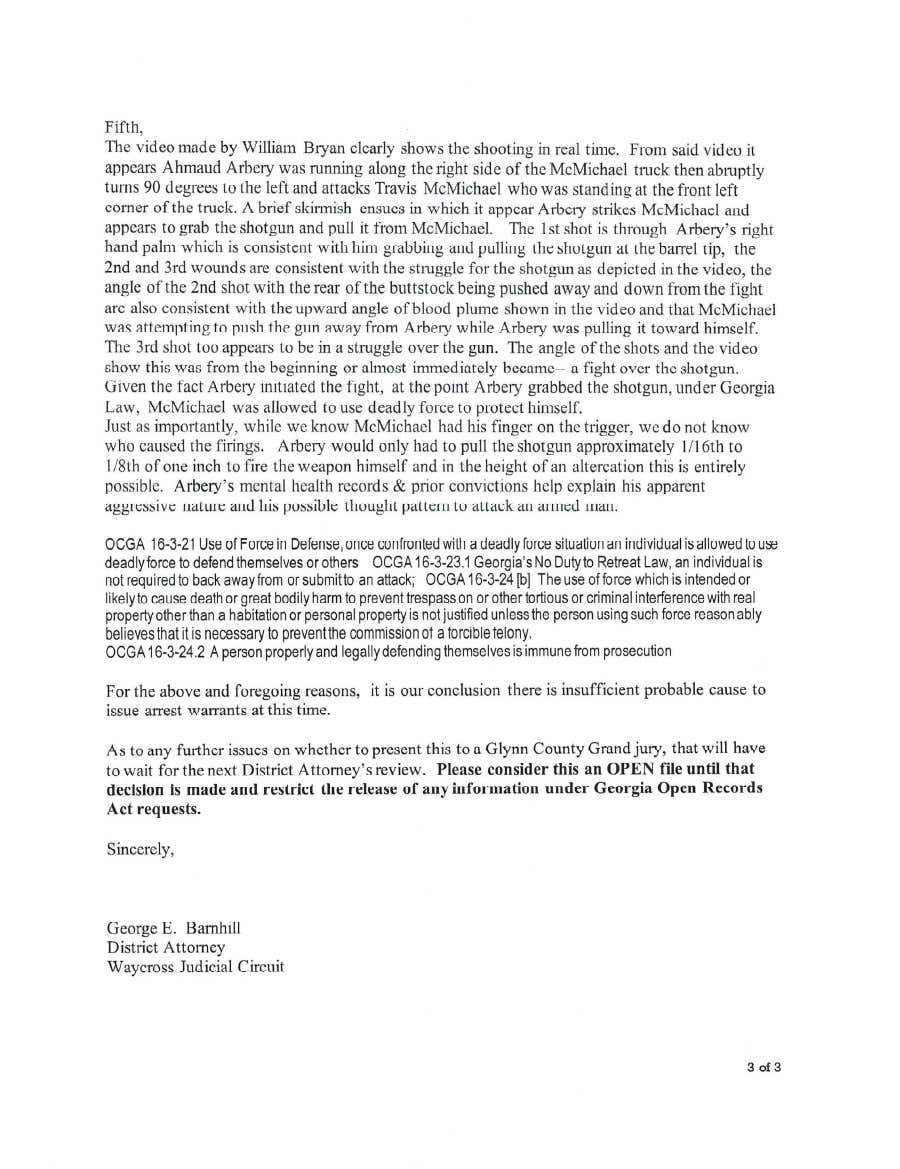 Georgia Develops 10-Year Child Abuse and Neglect Prevention Plan
State Is Reminding Georgians to Make Sure License Is Up To Date Ahead of Election
Posting....