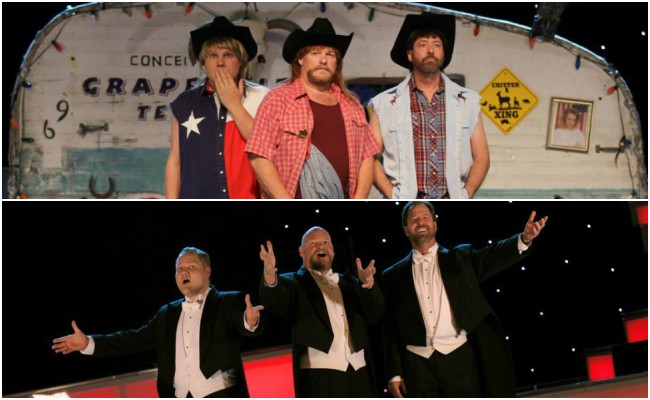 A unique show is coming to Brunswick for one night only! Get your tickets now for Saturday night’s performance by the outstanding comical and vocal group, The 3 Redneck Tenors.

Sure, the group’s name is entertaining, but the real punch line is that when the group was first combined by creator and artist Matthew Lord, there were actually four singers, and not all tenors.

Twelve years have come and gone, and the quartet is now officially a trio. The new members to the 3 Redneck Tenors is rounded out by baritone Blake Davidson and high tenor, Jonathan Fruge. Mr. Lord explained that the two newest members to join him are the best castmates, despite the fact that they aren’t original members of the group.

So, the story shared by Mr. Lord is that the group first came together for charity, and the entire performance was setup as a joke. This was during the time when the nation was bombarded with a slew of tenor groups: the 12 Irish Tenors, 3 Texas Tenors, etc. When approached by his friend to create a benefit, he came up with the most ridiculous idea he could, and the outcome was described as “unique and wildly entertaining”. That was in Grapevine, Texas, and an agent approached Mr. Lord after the show and explained that based on the greatness of that one show, he was prepared to send the group on a 35-city tour.

Perhaps you saw the trio on America’s Got Talent, during the show’s second season. The group made it to the finals. From there, the rednecks called Branson, MO home for a handful of years before literally taking the show on the road. Being a staple within the Branson community has played a part in the morals of the show. Mr. Lord explained that he learned through trial and error that ticket holders don’t want to hear about politics or religion.

“The show sells out just as often in CT as in GA. The shows sell out in both places,” he explained. “Whether it’s an all red state or an all blue state, the audience is a mixture of both, and everyone’s getting along, and everyone’s laughing and having a good time, and it’s just really fun to see”.

Knowing that an audience just wants to be entertained, he provides plenty of laughs at the adult show. An adult show, without the language, he adds. ‘Regardless of the city, even for dates in Vegas, we don’t change the show.’

This year, the group will be performing in 129 cities throughout the nation.  On April 28th, Brunswick will be the city hosting the goofy and charismatic group of classical-trained artists that only pretend to be of redneck nature. The opera meets Duck Dynasty. Classical meets Hillbilly. You get the idea. Get your tickets soon, because this is one show you don’t want to miss! Overalls optional.

A final thought from Matthew Lord about why you should catch this show, “The comedy is really funny and I hope you don’t learn a thing!”

The Golden Isles Live! Venue hosts a variety of shows each year. To find out more about the venue, or other upcoming acts, visit their website here.

The 3 Redneck Tenors will be in Brunswick at the Glynn Academy Auditorium on April 28th, at 7:30 pm.