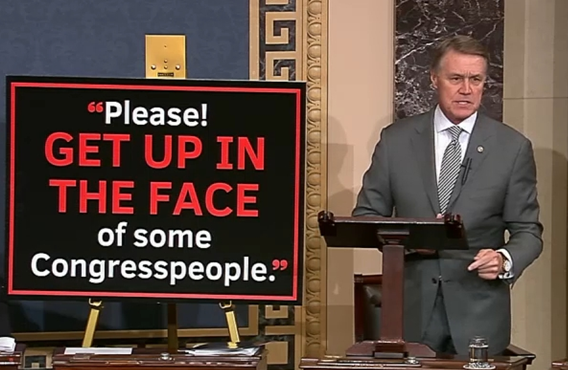 “Senate Democrats have made it clear, they’re willing to say or do anything to stop the president’s agenda.”

U.S. Senator David Perdue (R-GA) spoke on the Senate floor to call out the extreme rhetoric top Democrats have been using since President Trump took office and are using now to try and block Judge Brett Kavanaugh’s confirmation.

Civility In Our Country: “The United States Senate has become nothing more than a bully pulpit for someone’s special cause when it should be a deliberative body. We should be finding the truth here. My Democrat colleagues talk all the time about working in a bipartisan way. Yet when you get in the heat of the battle, nothing could be further from the truth. This is bigger than confirming Judge Kavanaugh to the United States Supreme Court. This is about civility in our country.”

Democrats Will Stop At Nothing: “Senate Democrats have made it clear, they’re willing to say or do anything to stop the president’s agenda. One of my democratic colleagues called Judge Kavanaugh ‘your worst nightmare.’ Another called him a nominee who wants to ‘pave the path of tyranny.’ Yet another said that this Supreme Court confirmation would ‘mean the destruction of the Constitution.’ Seriously? Worst of all, another one of my democratic colleagues said, anyone who supports Judge Kavanaugh’s nomination is ‘complicit in the evil.’ Really? … Senate Democrats have become so far removed from getting to the truth that they will stop at nothing to delay this Supreme Court confirmation.”

Inciting Extremism: “One of my democratic colleagues in this body has encouraged people to, ‘get in the face of some Congresspeople.’ Really? How does that move the cause of justice forward? The House Minority Leader wants to see ‘uprisings all over the country.’ Seriously? Another member of the House said, ‘They’re not going to be able to go to a restaurant’ – talking about Republicans. ‘They’re not going to be able to stop at a gasoline station. They’re not going to be able to shop at a department store. The people are going to turn on them. They’re going to protest. They’re going to absolutely harass them until they decide that they’re going to tell the president they can no longer hang with him.’ The same member of the House also said, ‘if you see anybody from that Cabinet in a restaurant, department store, gasoline station, you get out and create a crowd. You push back on them and you tell them they’re not welcome.’”

Well-Orchestrated Effort: “It is clear that this is all a well-orchestrated effort to cause delay and push this decision past the election. Shame on any member of this body, Republican or Democrat, that puts self-interest and political interest before their constitutional responsibility.”