Isakson, who is set to step down from his Senate seat on December 31, is the only Georgian ever to have been elected to the state House, state Senate, U.S. House and U.S. Senate. 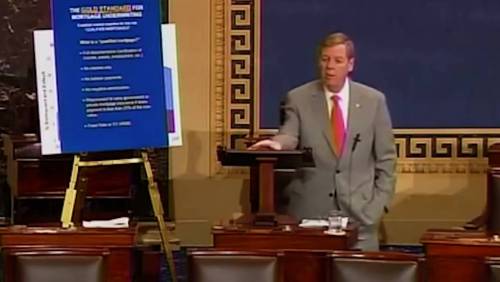 The video focuses on Isakson’s work for Georgia over the last few decades as the longtime elected official prepares to leave the Senate on December 31.

His office said in a news release:

“Applying the lessons learned throughout his 33-year real estate career, Isakson has aided Georgia communities during his 45 years in public service through planned development and by protecting Georgia’s transportation, energy and water interests, as well as job creators and employees.”

On Monday, the Georgia Economic Developers Association announced Isakson as the recipient of the Governor Zell Miller Public Policy Leadership Award at its awards luncheon. On Nov. 8, Isakson was honored by the Atlanta Regional Commission for a lifetime of public service and the lasting impact he leaves behind at the organization’s State of the Region breakfast.

In the video, Isakson credits his background in real estate as the “perfect training ground” for politics, “because in real estate, you’re causing a buyer and a seller agree to a price on a house or a piece of land… and make a transaction and make a deal.”

“[Isakson is] an unmatched salesman, whether you are selling homes, or ideas or legislation,” said U.S. Senator Mike Enzi, R-Wyo., who has served with Isakson on the Finance Committee and as chairman of the Budget Committee.

Georgia’s ports have also been a key to Georgia’s growth and Isakson’s office says he has consistently led efforts to support the ports on Georgia’s coast and inland. Quoting his former colleague:

“I can’t overstate, number 1, the impact of the ports to our economy,” said former Sen. Saxby Chambliss, R-Ga., in the video. “They are in excess of 350,000 jobs in Georgia that are generated as a result of the activity going on at the port in Savannah and the port in Brunswick.”

Isakson has worked with nominees seeking Senate confirmation to key federal positions to ensure they understand the importance of Savannah Harbor Expansion Project. He brought then-Vice President Joe Biden to the site and has pursued every possible legislative angle to ensure the completion of this project, which is critical to Georgia, the Southeast and the entire country.

“[Isakson] fought for that when he was in the House and the then the Senate. I mean, he has been doing this for 20 years. I’m new to the fight, but when I was on that Port Authority, I knew what kind of return investment it had,” said Sen. David Perdue, R-Ga. “It was over seven to one. Johnny’s been tireless about that, as he has been about so many other things in the state. Laying the groundwork for that, and really drove that tirelessly until we finally got approval for the funding that will get that thing done now.”

Isakson has served for 45 years in public service. He is the only Georgian ever to have been elected to the state House, state Senate, U.S. House and U.S. Senate. In addition, in 2016 he became the first Georgia Republican ever to be elected to a third term in the U.S. Senate.

The video below was produced by the Senate Republican Conference.