Pence Stumps for Kemp in Dalton: “This ain’t Hollywood. This is Georgia.” 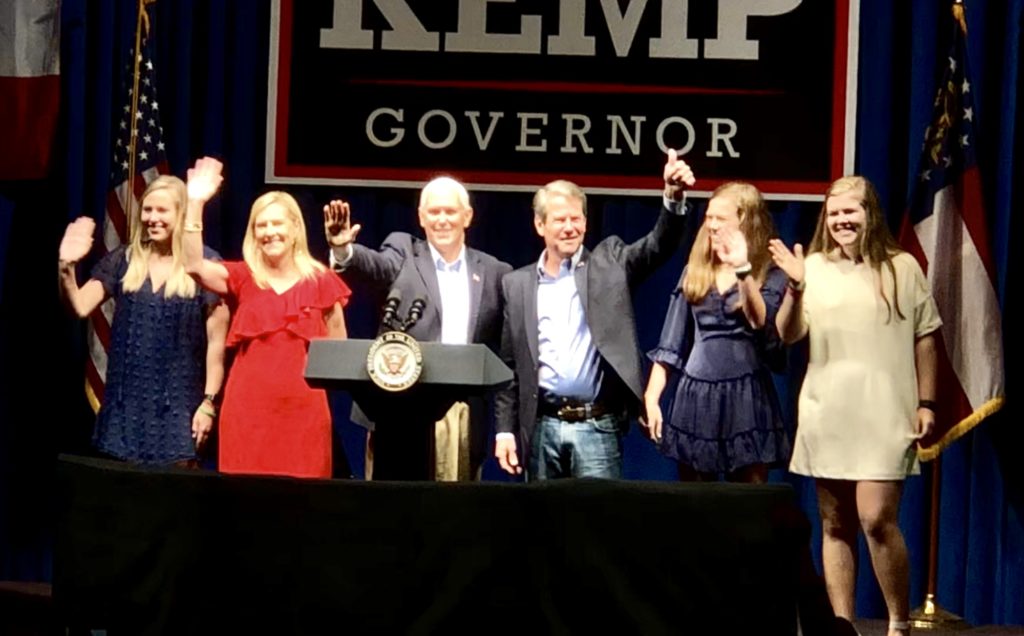 “It was the strongest show of Republican support that I have ever seen, not only from elected officials but also from the voters of North Georgia,” said Representative Ridley.

Kemp took the stage with his wife, Marty, and their three daughters. Kemp thanked his family, Vice President Mike Pence and President Donald Trump on their “unwavering support”.

“As governor, I’ll invest in public education and give our teachers a raise. We will cut taxes, like last year, and lower healthcare premiums. And I will fight hard to always protect the HOPE scholarship and keep our kids safe at school,” said Kemp.

He ended his short speech by urging Republicans to rally their friends, neighbors and relatives to the polls.

“This is the fourth quarter. I need you to show up like the Dawgs did in Jacksonville last weekend,” said Kemp.

Pence addressed the crowd for just under thirty minutes, telling Kemp supporters he was happy to be back in Georgia in support of Brian Kemp for Governor and also letting the crowd in on a little secret, it was also Kemp’s birthday. The crowd responded to the news by singing Happy Birthday.

Vice President Mike Pence said a vote for Brian Kemp is a show of support for President Donald Trump. This was Pence’s second trip to Georgia to stump for Kemp. He headlined a rally in Macon in July before the runoff.

“Y’all have a choice to make. The people in Georgia in just a few days are going to face a choice and it could not be more distinct…the choice between Brian Kemp and Stacey Abrams couldn’t be more stark. Brain Kemp is going to cut your taxes after he becomes Governor, Stacey Abrams says she’s going to raise your taxes by more than $300 million dollars. Brian Kemp is going to cut regulation, get government off your back. Stacy Abrams is going to make Georgia’s government bigger than ever before,” said Pence.

Pence claimed Kemp’s opponent Stacey Abrams is “bankrolled by Hollywood liberals,” he continued by saying “I heard Oprah is in town today and I heard Will Ferrell was going door-to-door the other day.”

“I’d like to remind Stacey and Oprah and Will Ferrell, I’m kind of a big deal, too,” said Pence. “And I’ve got a message for all of Stacey Abrams’ liberal Hollywood friends: This ain’t Hollywood. This is Georgia. And Georgia wants a governor that’s going to put Georgia values and Georgia first. And Brian Kemp is going to do just that.”

Dalton was the first of three Georgia stops for Pence, followed by rallies in Grovetown and Savannah.