Tomlinson, who faces 6 other Democrats in June, supports background checks, a ban on ‘weapons of war,’ red flag laws, and prohibiting persons on the ‘no fly’ list from purchasing firearms. 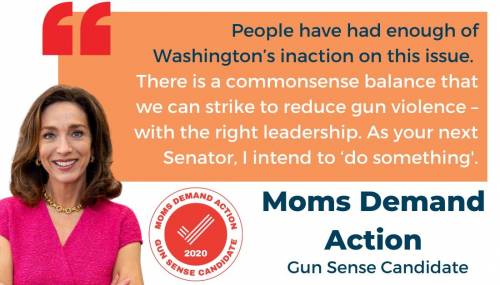 Moms Demand Action, which claims a nonpartisan status, touts a focus on passing stronger gun laws, closing loopholes, and encouraging “a culture of responsible gun ownership.” The organization has named Tomlinson one of their Gun Sense Senate candidates in 2020.

Tomlinson announced the support from Moms Demand Action Monday in a news release:

“A global pandemic closing all schools should not have been the reason that last month was the first March since 2002 without a school shooting. It should have been because Congress took action to protect our children and teachers from gun violence.

Tomlinson has been a vocal advocate for gun control measures. She has spent considerable time during the campaign chastising her Republican opponents and the majority in the Senate for ‘being in the pocket of the National Rifle Association.’ Her website policy position on ‘gun violence’ references ‘weapons of war’ on the streets and the need to give law enforcement a ‘fighting chance’ to keep communities safe.

While it is true that this country honors the Second Amendment, it is also true that the Supreme Court has held that federal and state legislatures can pass gun safety laws. The constitutional right to bear arms cannot infringe on the fundamental right of others to be free of terror and violence.

*Article corrected to reflect naming Tomlinson a Gun Sense Candidate for MDA, not a recipient of the MDA endorsement. 10:10 a.m. – 04.28.20