The Loeffler campaign has spent considerable time publicizing the exoneration by the DOJ and now they’re taking it to the airwaves. 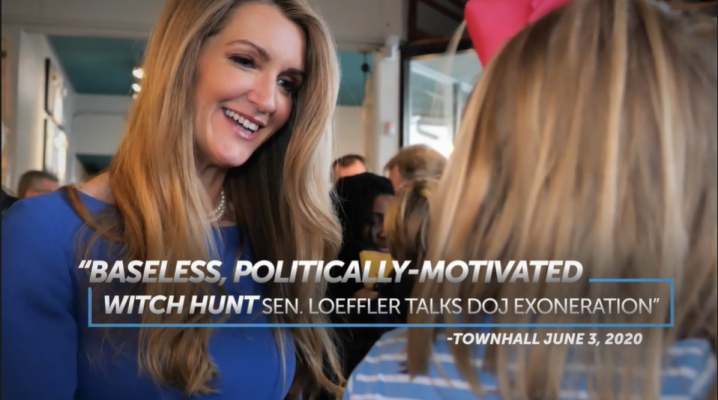 Senator Kelly Loeffler is running a new ad campaign on her exoneration after an investigation related to her ownership and sales of stocks in her portfolio.

Loeffler previously said she was being targeted by Democrats and the media and the DOJ exonerated her completely at the end of May. Her campaign has spent considerable time publicizing the exoneration and now it will be on the airwaves.

From the news release from her campaign Wednesday:

“Conservative businesswoman and political outsider Kelly Loeffler released a new ad highlighting her complete and total exoneration by the Department of Justice. After months of lies from the fake news media, they have dropped their witch hunt and admitted Senator Loeffler’s innocence.”
The Department of Justice (DOJ) and the Securities and Exchange Commission (SEC) launched a probe into the Senators’ stock transactions during the coronavirus outbreak following allegations of wrongdoing about stock trading after briefings.
The new ad, entitled “CLEARED,” is part of the campaign’s latest statewide ad buy. It will begin airing on broadcast and cable immediately.
The transcript of the ad is below:
“The fake news witch hunt over. False attacks against Kelly Loeffler – exposed. The liberal media lied about Kelly Loeffler because she’s a strong conservative woman. But Loeffler refused to back down. She fought back and won. Kelly Loeffler: delivering for Georgia.”
Georgia Democrats have not let up on Loeffler, more recently issuing a timeline on the stock trading:
January 24th: Loeffler’s Senate HELP Committee hosts a private all-Senate briefing on the coronavirus threat — the same day as her first reported joint stock sale.

SELL – January 31st: Loeffler’s husband dumps nearly $100,000 worth of retail stocks — one of their first major sell-offs in the retail industry ahead of a nationwide downturn.

BUY – February 14th: Loeffler buys $168,000 of stock in Citrix Systems, Inc., a teleworking software company, along with another $168,000 in Oracle, which will go on to work with the federal government to combat the coronavirus outbreak.

SELL – February 26th: Loeffler’s husband and New York Stock Exchange Chairman Jeffrey Sprecher sells off $3.5 million worth of stock in their company ICE, just over 30 days after Loeffler’s private Senate briefing — the amount of notice ICE requires executives to give before buying or selling shares.

BUY – February 28th: Loeffler’s husband buys over $100,000 worth of stock in DuPont, “a company that makes COVID-19 protective garments.” Over the next few weeks, her husband will buy another $100,000 worth of DuPont stock while Loeffler still downplays the coronavirus threat.

BUY – March 6th: Loeffler and her husband buy $46,000 worth of stock in a travel booking company the day she traveled with President Donald Trump to the CDC.

BUY AND SELL – March 10th: Loeffler claims “the economy is strong” and “jobs are growing” even after she and her husband dumped stocks — and the very same day her husband makes another $12,000 purchase of DuPont stock and they begin selling off stock in a travel booking company she bought only days before.

SELL – March 11th: Loeffler and Sprecher sell off another $15.3 million worth of ICE shares and unload the rest of their stock in a travel booking company — just as Trump announces air travel restrictions right after the markets close.

March 20th: As the Daily Beast breaks the news of Loeffler’s stock sell-off scandal, one Republican candidate openly calls for her resignation and calls her “unfit to represent Georgia” as Republican House Speaker David Ralston expresses worries about “down-ticket damage.”

March 21st: The New York Times editorial board calls for the Senate to launch a full ethics investigation “and, if warranted…criminal prosecution” against Loeffler, and the Savannah Morning News decries her “potential illicit profiteering” and says the “Justice Department and…Securities and Exchange Commission should get involved.”

March 23rd: The SEC issues “a sharp warning” against using “nonpublic information” to trade on the coronavirus outbreak while refusing to comment on whether Loeffler and Sprecher are under investigation — the same day that Mitch McConnell’s super PAC, which had previously spent to boost Loeffler, leaves Georgia off its list of ad buys.

March 27th: Even more members of Loeffler’s own party distance themselves from her, with one prominent conservative calling the accusations against her “very relevant.” Outside Republican groups that previously backed Loeffler, meanwhile, “are now turning their attention elsewhere at a pivotal moment in her campaign.”

March 29th: A new report reveals the DOJ and the SEC have launched a probe into lawmakers’ stock transactions during the coronavirus outbreak, coming nearly a week after the SEC issued a warning against insider trading during the pandemic and refused to state whether Loeffler and her husband were under investigation.

March 31st: New disclosures reveal even more stock sell-offs by Loeffler and her husband while she continued to downplay the threat of coronavirus — and show investments made “in a company that makes COVID-19 protective garments.”

April 6th: Loeffler claims she “can’t say anything that [she] would have done differently” about her stock trades — only days before she completely reverses course and remakes her portfolio in an attempt at damage control.

April 8th: After originally claiming she wouldn’t have done anything differently, Loeffler tries to distract from her scandal by shifting her assets into mutual funds, but still refuses to place them into a blind trust or call for a Senate Ethics Committee investigation.

April 17th: Loeffler continues her pattern of blaming anything and everything but herself for her growing scandal by repeatedly blaming “socialism” and financial transparency laws — among other things — for her stock trades that have drawn bipartisan criticism.