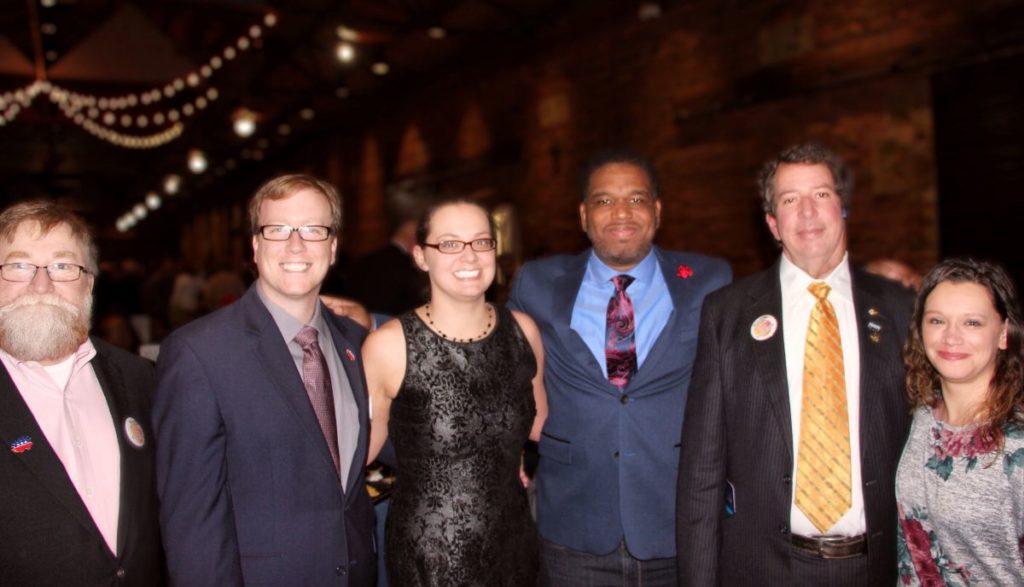 Libertarian Party of Georgia members attended the 57th annual Wild Hog Supper earlier this week. The Wild Hog Supper, co-hosted by the Georgia Food Bank Association, the Department of Agriculture, and Commissioner Gary Black, is open to the public and widely attended by legislators and movers and shakers from across the state.

Members of the Libertarian party attended to network with legislators and seek sponsorship for the party’s proposed ballot access bill. Georgia has some of the nation’s worst laws surrounding ballot access. Republicans and Democrats are granted near-automatic access to appear on ballots, while independent and minor-party candidates must collect signatures, petition, and pay dearly to earn that access.

Ted Metz, Chairman of the Libertarian Party of Georgia commented about the event: “It was discouraging to have to explain the petitioning requirements to so many of the legislators, they have no understanding of the process for 3rd party and independent candidates to get on the ballot. One Representative, who made sure to let me know that she was a Democrat, insisted that Libertarians already had ballot access. After explaining that Libertarians only had ballot access for State-wide seats and non-partisan races, and that all other positions required petition signatures from 5% of the registered voters in the prior election, she said, ‘So, you can run for School Board, that’s non-partisan.’ This type of response is why we will continue to promote and seek sponsorship for the proposed ballot access legislation during this year’s legislative session.”

In 2016, all 180 members of the Georgia House were up for re-election, and 82% of those members did not have a challenger in the general election.  A single candidate race is not choice, it’s tyranny. No third-party candidate in Georgia has ever collected enough signatures to appear on the ballot for the U.S. House since Georgia passed an election “qualifying law” in 1943, according to the AJC. Georgia also leads the nation in unopposed races, an unwelcome distinction for a state still recovering from a history of election abuses.

Political favoritism and exclusion enshrined in law is an embarrassment, hindering Georgia’s progress and political discourse. 33% of Georgians identify as a Republican and 22% identify as Democrat. The remaining 44%, identify as Independents or belong to a “minor” party. A plurality of voters, in other words, back candidates who are blocked from appearing on Georgia ballots.

Below is a link to the draft ballot access bill. If passed, ballot access provisions will level the playing field by allowing independents, Greens, Libertarians, and other issue-oriented political bodies the same advantages enjoyed by Republicans and Democrats.

Vice Chairman of the Libertarian Party, Ryan Graham stated: “Just like the right to cast a ballot, citizens must have the right to submit a candidate to appear on the ballot. That privilege can’t be restricted to just two political parties. Libertarians believe in free markets, including a marketplace of ideas. Everyone must be allowed to compete.”

The Libertarian Party of Georgia believes that together, as a state, we can reform Georgia’s outdated ballot restrictions and offer alternatives that would make Georgia government truly representative of its citizens.

Link to: Draft language of a 2019 bill to reform ballot access laws in Georgia.